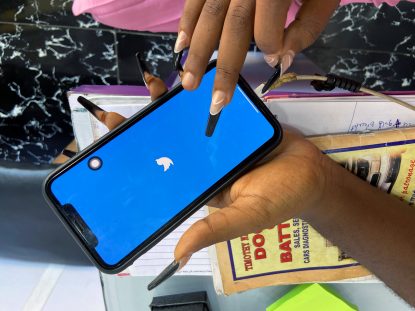 Entrepreneur Ogechi Egemonu opens the Twitter app on a smart phone at her office in Lagos, Nigeria, June 10, 2021. Bishop Lucius Iwejuru Ugorji of Umuahia has joined other Nigerians to appeal to the federal government to unban Twitter. (CNS photo/Seun Sanni, Reuters)

In a homily June 13 at Mater Dei Cathedral in Umuahia, Bishop Ugorji said the nation’s economy would suffer a further slide as a result of the ban. He also said the country gets socioeconomic benefits from the social media platform.

Bishop Ugorji said each day Twitter or Facebook is banned in the country, Nigerians are likely to lose over $2.4 million.

“The ban breached the constitution and deprives the people their fundamental rights to freely communicate and obtain information from across the globe,” he said.

Nigeria’s National Broadcasting Commission directed all media houses and telecast stations to “suspend the patronage of Twitter immediately,” days after Nigeria’s government indefinitely suspended the platform and said all users who posted tweets would be prosecuted. Nigerian Minister of Information and Culture Lai Mohammed alleged the platform was being used to promote the views of those who wanted to destabilize the country.

No fewer than 39 million Nigerians have Twitter, according to NOIPolls, a public opinion and research organization.

Bishop Ugorji urged President Muhammadu Buhari to initiate measures to douse the tensions in the country, saying nobody can put out a raging fire with fire, but must quench fire with water.

“Let people talk on issues bordering on their existence and for an enduring peace to return to Nigeria,” the bishop said.

He criticized the spate of killings, maiming of innocent Nigerians and the wanton destruction of people’s property across the country by Boko Haram insurgents and other ethnic militias.

“Unfortunately, we have killer herdsmen in north-central and southern Nigeria,” the bishop said. “And recently, we have witnessed the attacks on (the) federal government’s property and killings of security operatives in the southeast. This is an act of lawlessness, and we must condemn it.”

“Human life is sacred. It belongs to God, and he alone can take it. No individual has the right to take another person’s life,” Bishop Ugorji said.

He advised the president to remember his 2015 campaign promises to Nigerians and urged him to ensure an end to the security challenges as well as improve the economy.

NEXT: Seen and unseen: The role of faith, reason in the search for alien life