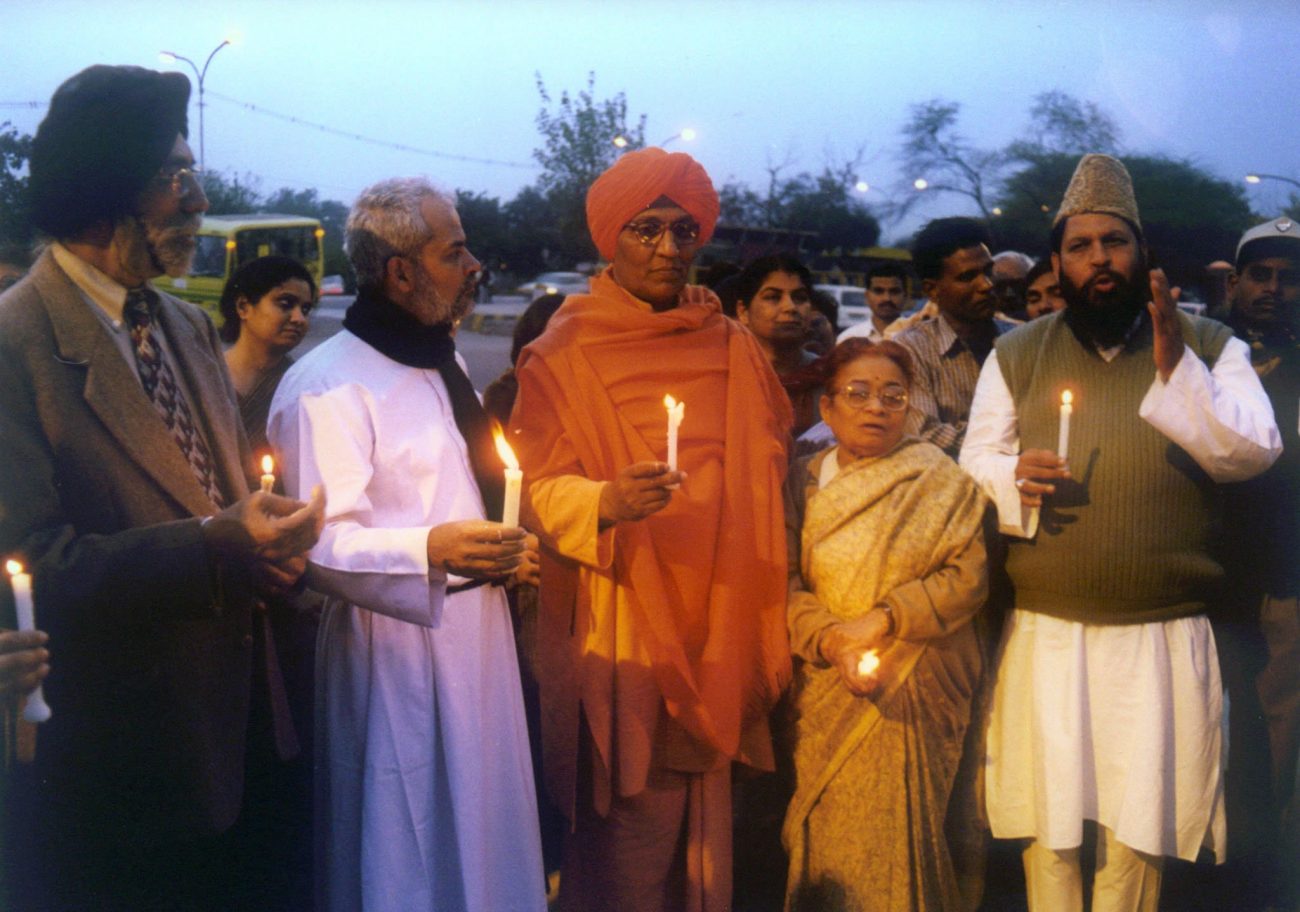 People are pictured in a file photo during an interfaith peace gathering in New Delhi. The Pew Research Center has released its study on religion in India. (CNS photo/Anto Akkara)

However, the study, “Religion in India: Tolerance and Segregation,” released June 29, notes: “Indians say it is important to respect all religions, but major religious groups see little in common and want to live separately.”

“While people in some countries may aspire to create a ‘melting pot’ of different religious identities, many Indians seem to prefer a country more like a patchwork fabric, with clear lines between groups,” the study said.

“Across religious groups, large shares say that, based on what they know, members of their religious group are ‘very different’ from followers of other religions” in the nation. Hence, interreligious marriages remain a rarity, with strong opposition to those who dare to challenge the social norm, reinforcing the religious “segregation” mentioned in the study title.

“Less than 1% of all Indian marriages are with spouses who were raised in a different religion,” the study pointed out. “Nearly all married people (99%) report that their spouse shares their religion.” This includes nearly universal shares of Hindus (99%), Muslims (98%), Christians (95%), Sikhs and Buddhists (97% each). The survey did not include enough interviews with married Jains to report on the religion of their spouses.

The study was funded by The Pew Charitable Trusts and the John Templeton Foundation “to understand religious change and its impact on societies around the world.”

The study, which Pew Research Center claims to be “most comprehensive, in-depth exploration of India to date,” also indicates that “most people across different religious backgrounds, education levels and age groups say communal violence is a very big problem in India.”

The study notes that “attitudes toward interreligious marriages and neighborhoods are closely tied to views on politics and national identity. Hindus who strongly favor religious segregation — those who say that all their close friends are Hindus, that it is very important to stop Hindus from marrying outside the faith and that they would not accept people of some other faiths as neighbors — are much more likely than other Hindus to take the position that it is very important to be a Hindu to be ‘truly’ Indian. They are also more likely to have voted for the Bharatiya Janata Party (BJP) in the 2019 parliamentary elections.”

The BJP-led government has been accused of discrimination against citizens based on religion. In late 2019, it enacted the Citizenship Amendment Act, which many said discriminated on the basis of religion, especially against Muslims. Earlier, a British parliamentary report criticized the Indian government for failing to protect religious minorities from violent Hindu hard-liners.

Dietary habits also add to religious identity, with vegetarianism or prohibitions against consuming beef or pork.

One key fault-line in Indian society divided on religion, the study points out, is the widespread caste-based discrimination that also leads to the social segregation, with members of the same religious faith preferring to keep away from the low castes called “Scheduled Castes” or “dalits.”

“Even though the system’s origins are in historical Hindu writings, today Indians nearly universally identify with a caste, regardless of whether they are Hindu, Muslim, Christian, Sikh, Buddhist or Jain,” the study says.

While “majorities of all the major caste groups say it is very important to prevent inter-caste marriages,” the study points out, “differences by religion are starker.”

While majorities of Hindus (64%) and Muslims (74%) say it is very important to prevent women from marrying across caste lines, the study noted that only 34% of Christians opposed inter-caste marriage. Similarly, 83% of Christians would accept a member of a lower caste as a neighbor, compared to 72% of Hindus and 69% of Muslims.

The study noted the Christian community was top in daily prayers — 77% — compared to other religious groups. Similarly, Christians rank top among religions in baptism or religious naming ceremony at 79%, compared to 59% among Buddhists and 65% among Muslims.

The study also listed Christians as most likely to wear religious pendants, like crosses.

The study further notes that with highest belief in miracles, heaven and last day of judgment, Christians have least faith in karma, evil spirits or astrology. 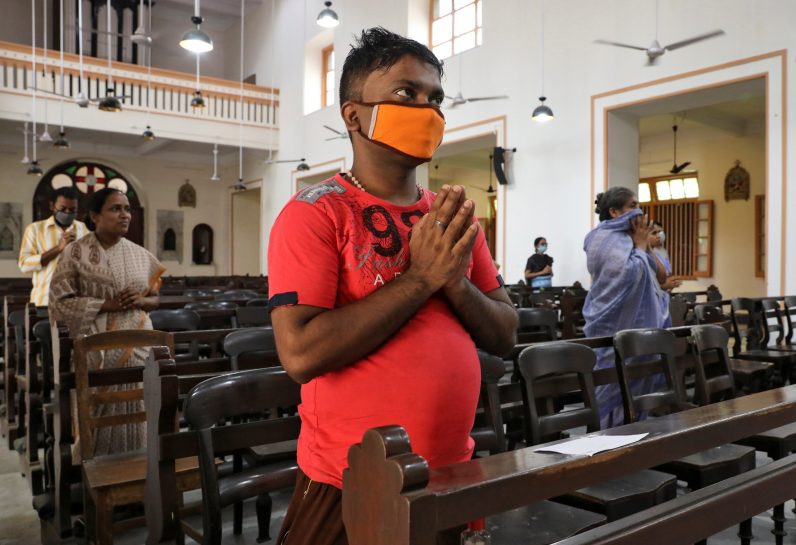 A man wearing a protective mask prays inside a church in Kolkata, India, June 1, 2020. The Pew Research Center has released its study on religion in India. (CNS photo/Rupak De Chowdhuri, Reuters)