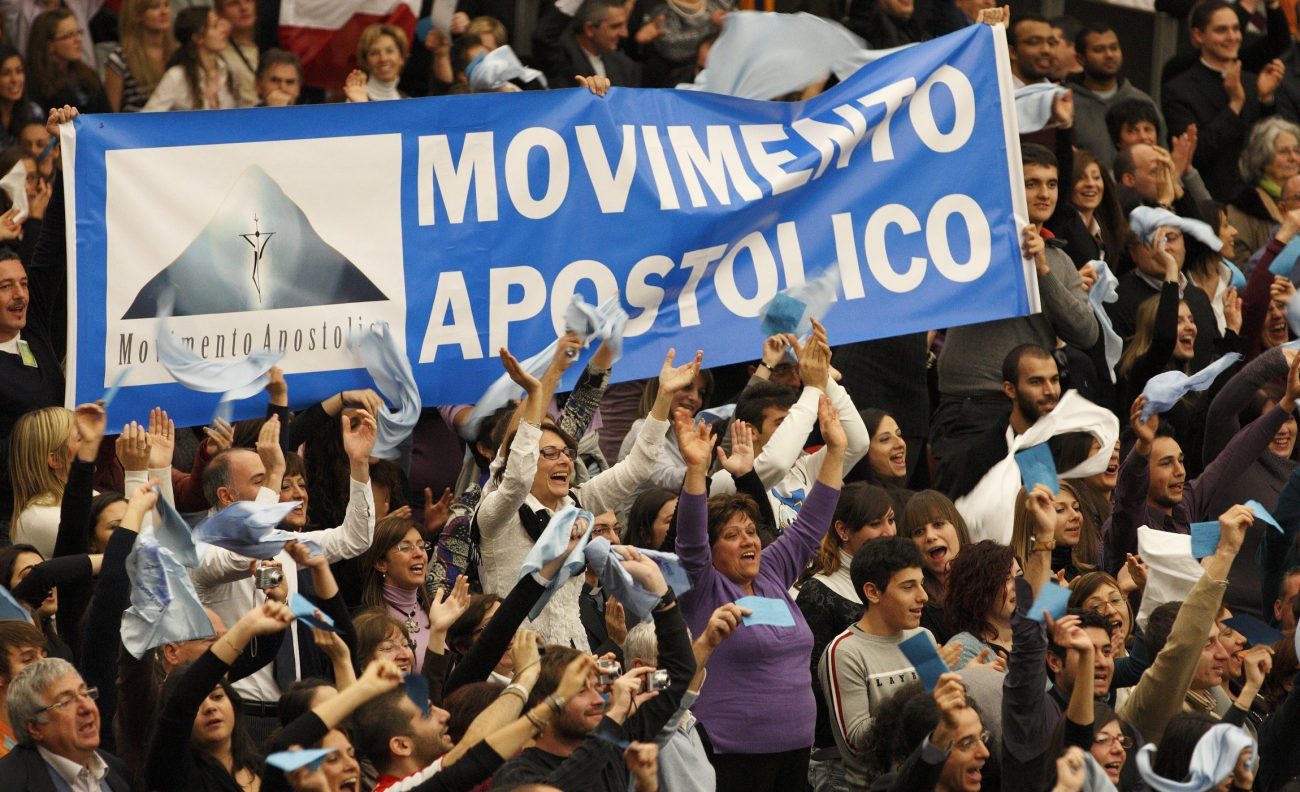 Members of the Apostolic Movement in Italy cheer during Pope Benedict XVI's general audience in Paul VI hall at the Vatican Nov. 24, 2010. With the approval of Pope Francis, the Vatican has ordered the dissolution of the Apostolic Movement, an Italy-based lay movement, citing problems with the group's origins, catechesis, governance, respect for members' consciences and finances. (CNS photo/Paul Haring)

VATICAN CITY (CNS) — With the approval of Pope Francis, the Vatican has ordered the dissolution of an Italy-based lay movement, citing problems with the group’s origins, catechesis, governance, respect for members’ consciences, handling of donations and with the divisions it allegedly has created among clergy of the Archdiocese of Catanzaro-Squillace, where it is based.

“The presumed revelations that gave birth to the Apostolic Movement through its founder, Mrs. Maria Marino, are to be considered not of supernatural origin — ‘constat de non supernaturalitate,'” the decree said.

While Marino has not been public about what she says were apparitions of Mary to her, she said they inspired her to establish the movement in 1979 and form the basis of the two key texts used to educate members. The movement’s website says its “charism” is to “remind the world of the word of Jesus, which it has forgotten” and to return to a situation in which the faith of the church and its moral principles guide people’s lives.

According to the website, the movement is now present throughout Italy and has communities in Switzerland, Germany, Austria, Congo, Cameroon, Ivory Coast, Madagascar and India.

Archbishop Vincenzo Bertolone of Catanzaro-Squillace published the Vatican decree June 29 and urged all members of the movement to accept it in “humble obedience.”

While serious problems led to the suppression of the group, the archbishop said that “the good accomplished by many adherents to the spirituality of the Apostolic Movement will not be lost; many people have returned to the faith and to Christian practice, many sacred vocations were discovered and cultivated; and many members are actively involved in parish activities.”

The decree was issued after studying a report from a four-member team of bishops and theologians, who conducted an apostolic visitation at the Vatican’s request from Oct. 13, 2020, to April 17, 2021.

“In its 40 years of existence, the Apostolic Movement grew, found adherents among the lay faithful and saw the birth of vocations,” the decree said, “but very soon encountered difficulties and contrasts.”

Problems “related to questions of a doctrinal and disciplinary character, in particular about the origin of the presumed revelations to the foundress and the deep divisions within the church, especially among the diocesan clergy, generated by the belonging to the movement” led the doctrinal congregation, clergy congregation and dicastery for laity to organize the visitation “in order to eliminate the divisions that afflict it and offer paths of restoration in truth, according to an authentically ecclesial spirit,” the decree said.

The visitation, it said, “ascertained the presence of practices that prejudice the necessary distinction between the sphere of governance of the association and the sphere of the conscience of its members” as well as a “lack of transparency” about the origin, management and use of temporal goods.

The investigation also looked at “the characteristics of the alleged supernatural phenomena that gave rise to the movement through the work of the founder; the doctrinal correctness of ‘Words of Exhortation’ and ‘Meditate,’ texts written by the founder after the alleged messages received; the theological value of the charism of foundation of the Apostolic Movement; problems of a disciplinary nature, especially with regard to the formation and membership of priests in the movement and their tendency to constitute a strongly self-referential priestly elite,” as well as problems with governance being limited to a small group.

The report of the visitation was discussed during a meeting of the three Vatican dicasteries May 19, the decree said. The Vatican officials “ascertained that there are no elements capable of attributing a supernatural origin to the presumed phenomena from which the movement sprang, and that, on the contrary, we can arrive at the moral certainty that it is a matter of the personal experiences of the foundress that cannot be traced back to a supernatural action.”

NEXT: Pew study: Indians are devout, but religions want to live separately