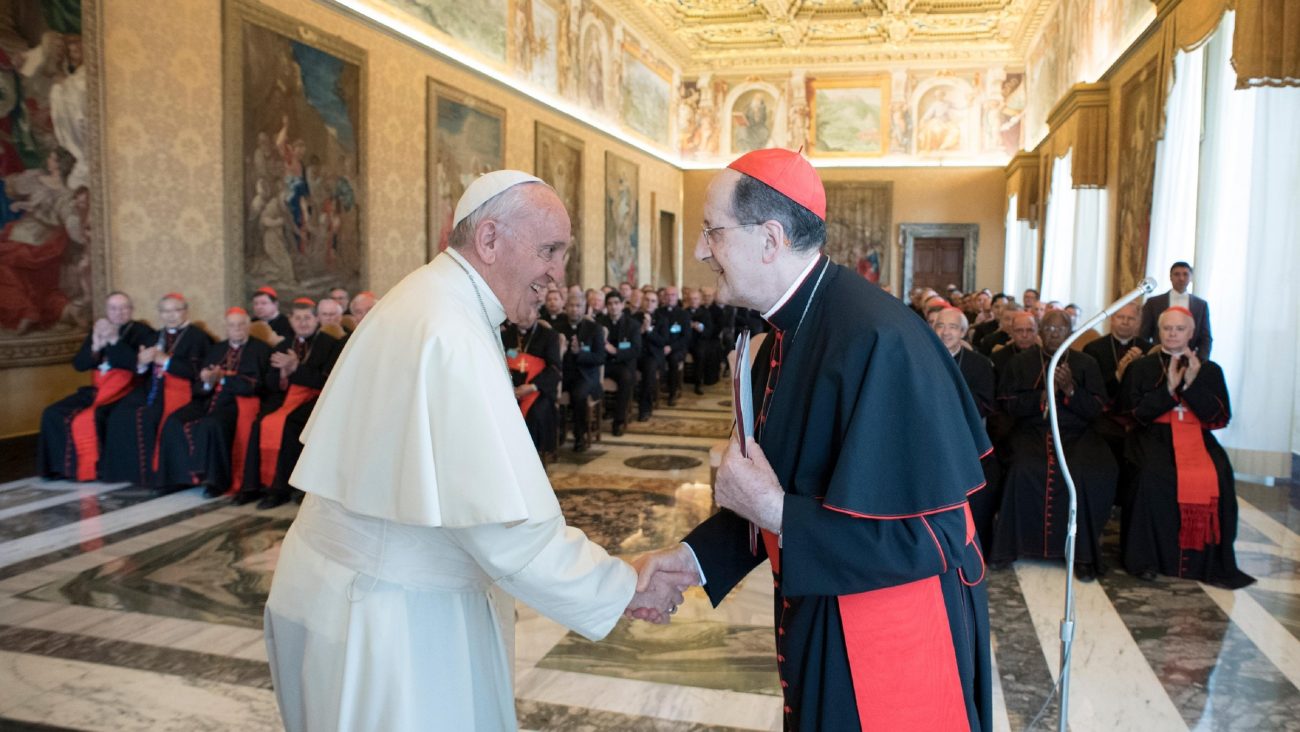 Pope Francis greets Cardinal Beniamino Stella, prefect of the Congregation for Clergy, during an audience with participants in the plenary assembly of the Congregation for Clergy at the Vatican in this June 1, 2017, file photo. Cardinal Stella will reach the mandatory retirement age of 80 Aug. 18. Pope Francis has asked an Italian bishop to conduct an official visit at the congregation in advance of Cardinal Stella's retirement and the naming of a new prefect. (CNS photo/L'Osservatore Romano)

In a letter June 7, Bishop Egidio Miragoli of Mondovì, Italy, told the priests of his diocese that Pope Francis had asked him “to undertake a visit, in his name, of the Congregation for Clergy.”

The current prefect of the congregation, Cardinal Beniamino Stella, will reach the mandatory retirement age of 80 Aug. 18. He was appointed prefect by Pope Francis in September 2013.

In his letter to the Mondovì priests, Bishop Miragoli said that when Pope Francis visited the assembly of the Italian bishops’ conference May 24, he told the bishop he wanted him to make the visit as “a favor.”
Then, June 3, he met the pope at his Vatican residence and was given further details, which the bishop did not share.

Bishop Miragoli did tell his priests that the task would require him to meet personally with the congregation staff in Rome beginning June 9 and likely would occupy a significant amount of his time, at least for the month of June.

However, the bishop said, he would maintain his diocesan commitments, including his schedule of confirmations.

The congregation coordinates and promotes the training of candidates for the permanent diaconate and diocesan priesthood and their ongoing formation after ordination. It also handles the requests of diocesan priests and deacons seeking dispensations from their ministerial obligations.

It also promotes the active functioning of presbyteral and parish councils and is involved with safeguarding the use of church assets.

Bishop Miragoli, 65, holds a doctorate in canon law from Rome’s Pontifical Gregorian University, and worked at seminaries and on church tribunals before being named bishop of Mondovì in 2017.

NEXT: Crime of abuse is personal failure, not institutional, cardinal says