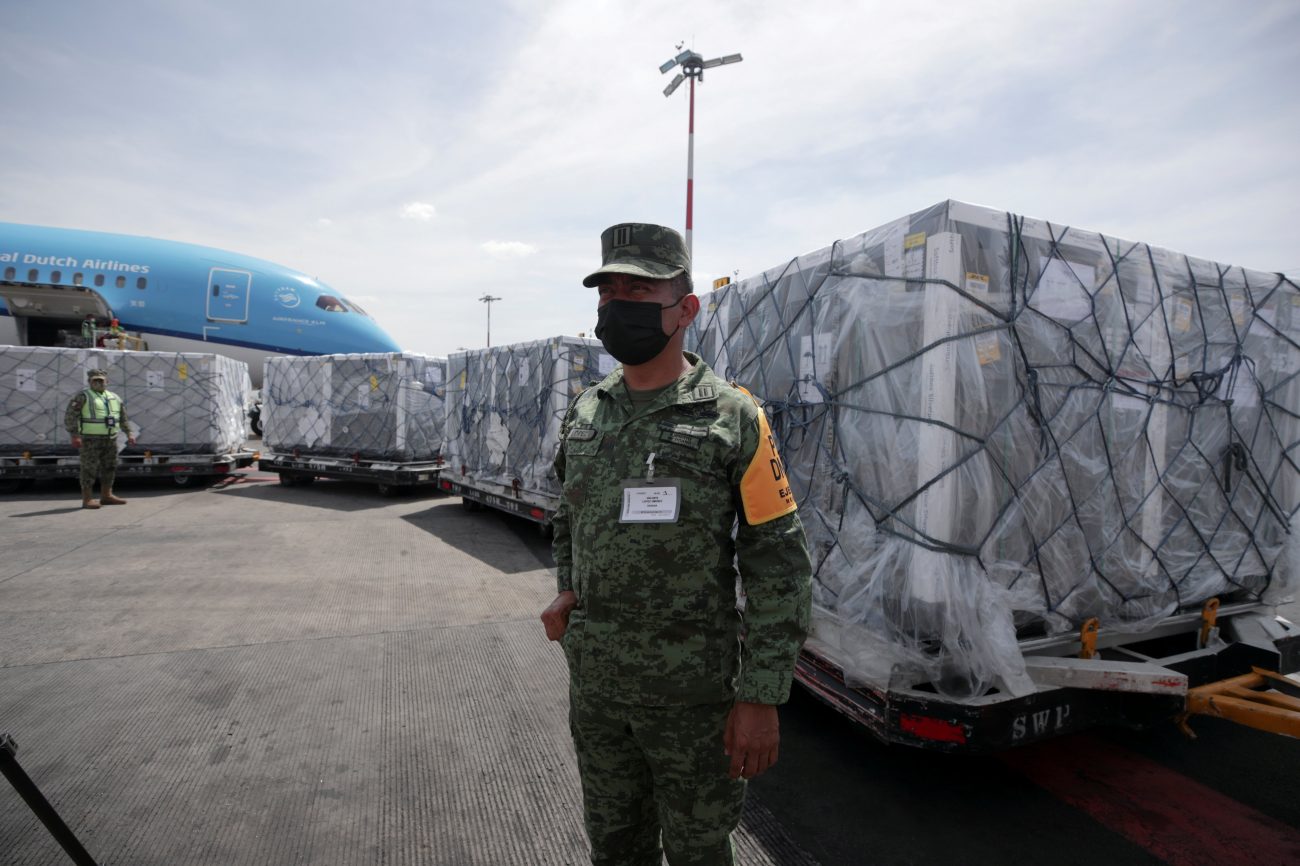 A member of the National Guard looks on as a batch of AstraZeneca COVID-19 vaccines, delivered under the COVAX scheme, is unloaded from a plane at Benito Juarez International Airport in Mexico City May 27, 2021. In a joint statement, the heads of the bishops of the European Union and the U.S. released a joint message that mentioned their support of the COVAX initiative. (CNS photo/Henny Romero, Reuters)

ROME (CNS) — Ahead of a transatlantic summit, the heads of the European Union bishops’ commission and the U.S. bishops’ conference called on government leaders to work together for a more just, peaceful and sustainable world.

When political leaders meet in Brussels June 15 for the EU-U.S. summit, “We pray that the participants be guided by wisdom and mutual trust to lay the basis for a renewed transatlantic partnership for greater peace, justice and sustainable human development across our continents and in the world,” said the joint declaration.

“The church on both sides of the Atlantic stands ready to support these noble efforts of our decision-makers,” it said.

Writing on behalf of the U.S. and EU bishops, they issued a joint declaration titled, “Shared Responsibility for the Whole Human Family.” They said the joint declaration was inspired by Pope Francis’ encyclical “Fratelli Tutti” and is a call for leaders to be “beacons of trust” who can revitalize and engage in multilateral cooperation.

The European Union and the United States have the “shared values and principles of freedom, democracy, rights of nations, the rule of law, justice and respect for human life” as well as a shared commitment “to the promotion of global peace, justice and human development,” the statement said.

This common foundation “makes the EU and the U.S. natural partners in steering multilateral efforts for ‘healing the world that was sick,'” and the Catholic Church wishes to encourage the two sides to see the summit as “a stepping stone” for joint action for facing current challenges and needs, it said.

The world urgently needs “a people-centered and just recovery from the pandemic and its consequences,” including supporting the COVAX Facility and the equitable distribution of vaccines, it said, as well as more joint efforts in promoting peace around the world and caring for humanity’s common home.

Among the specific actions the two bodies of bishops encouraged are:

— Promoting dignified working conditions, including among small- and medium-sized businesses and putting an end to tax evasion and other tax offenses so everyone contributes to the common good and a just recovery.

— Guaranteeing trade policies are “grounded in people-centered ethical criteria” and trade agreements “abide by principles which promote and defend human life and dignity, protect the environment and public health, and promote justice and peace in our world.”

— Assisting poorer nations in fighting poverty, hunger, corruption and other injustices, reducing their burden of external debt and promoting a new model of integral human development and cooperation.

— Promoting a peaceful resolution of violent conflicts and instability around the world, including in the Middle East; enhancing arms exports control, including nuclear disarmament; and stopping the illicit arms trade.

“We also wish to appeal to European and U.S. decision-makers to intensify their joint efforts in the protection of the fundamental right to religious freedom which is a core value of the transatlantic partnership yet continues to be threatened in many parts of the world,” the joint declaration said.

The statement also upheld people’s right to remain in their home countries and live in security and dignity, but when they are forced to flee, they must be welcomed, protected and integrated.

Lastly, the bishops encouraged the U.S. and the EU leaders to base future action on “the concept of integral ecology as outlined in Laudato Si’, which includes the challenge to address climate change as an opportunity to improve general living conditions, health, transport, energy and security, and to create new job opportunities.”

“Even though the transatlantic partnership is based on a solid foundation of common principles and values,” the archbishop and cardinal said, “it needs to be nurtured continuously to make it even more fruitful and mutually beneficial not only for our citizens, but also at the service of the whole human family.”

NEXT: Pope orders study of clergy congregation before prefect retires