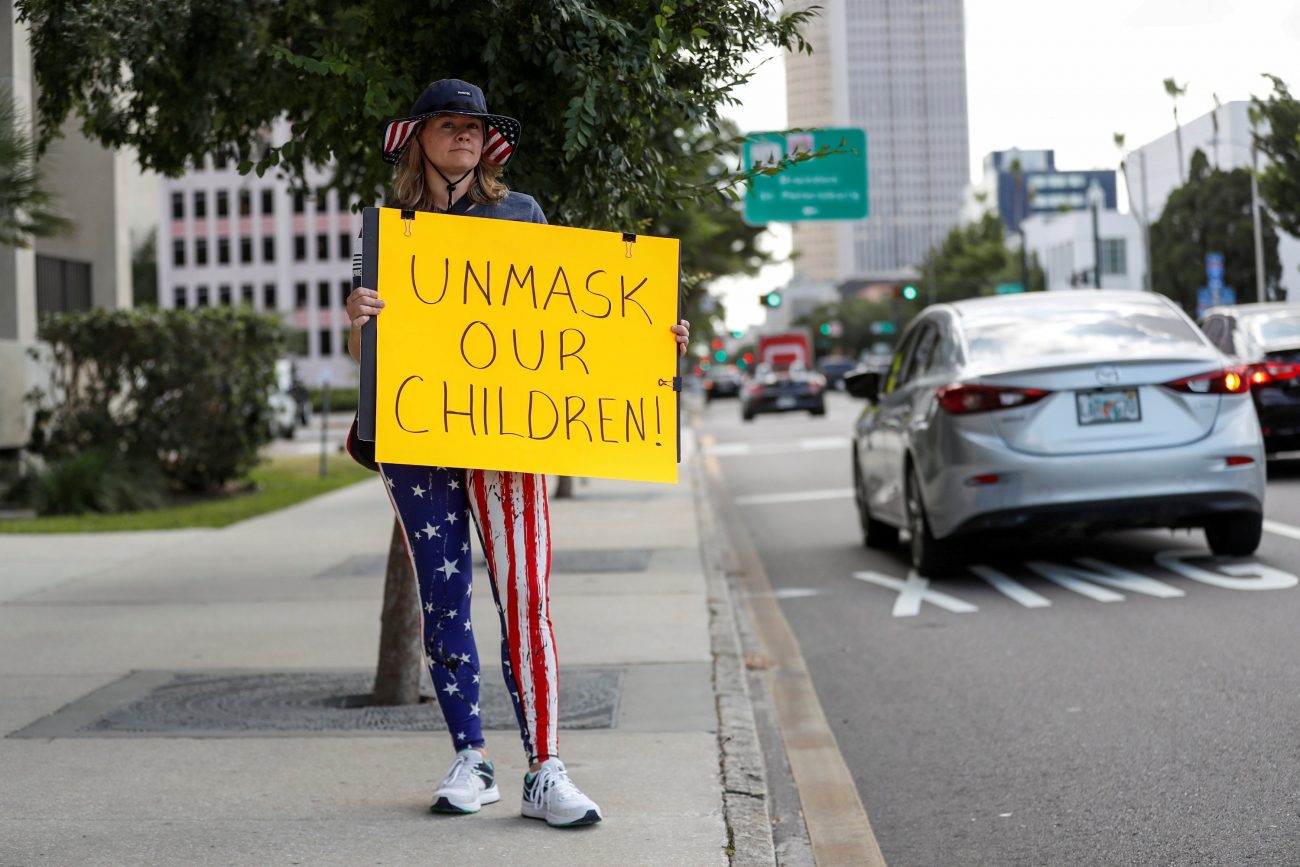 A person in Tampa, Fla. demonstrates outside a Hillsborough County School Board meeting May 18, 2021, against the school COVID-19 mask mandate. The 6th U.S. Circuit Court of Appeals heard arguments July 21, 2021, from Resurrection Catholic School in Lansing, Mich., on whether requiring Michigan students to wear masks in classrooms violates their religious freedom. (CNS photo/Octavio Jones, Reuters)

A lower court sided with state officials in the suit filed last October when the mandate was in place for school students.

On July 21, this case went before a federal appeals court even though most of the state’s COVID-19 restrictions were rescinded in June.

The complaint is from Resurrection School, which has a small student body of 150 students in kindergarten through eighth grade. The school, part of the Church of the Resurrection, emphasizes a traditional curriculum, according to the school’s website.

Its pastor, Father Steve Mattson, told WILX, an NBC affiliate in Lansing, that the case still went forward out of a concern that the mask mandate “can be reinstated at any time and we want to be able to get in front of it.”

He said students fifth grade and younger at the school never wore masks during the previous school year, when the school stayed open in-person all year, and there was no spread of COVID-19.

The school and parents were represented by the public interest law firm American Freedom Law Center in arguments before the U.S. Court of Appeals for the Sixth Circuit.

Last December, Judge Paul Maloney of the Western District of Michigan did not grant the school’s request for a preliminary injunction to ban enforcement of the state’s mask mandate for students in grades five and younger stressing the requirement was neutrally applied and did not target religious schools.

The lawsuit said the state mandate contradicted what the school emphasizes: that “every human has dignity and is made in God’s image and likeness.”

“Unfortunately, a mask shields our humanity. And because God created us in his image, we are masking that image,” it said.

It went on to state that masks “make us anti-social” and “they interfere with relations.”

The lawsuit pointed out that some of the plaintiffs’ students suffered from allergies, breathing or focusing issues and that the masks interfered with their ability to keep up academically and socially.

“The challenged orders single out children who cannot tolerate masks, making them unable to participate in religious education,” it said.

It also said wearing face masks “communicates the message that COVID-19 continues to be a terrifying and deadly threat” even for young students who are socially distanced. It added that “science and data do not support this message or the mask mandate” and that a mask wearer is showing that one has “surrendered his or her freedom to the government.”

On July 20, the Centers for Disease Control and Prevention recommended schools require masks for students under the age of 12 since they aren’t eligible yet for COVID-19 vaccine.