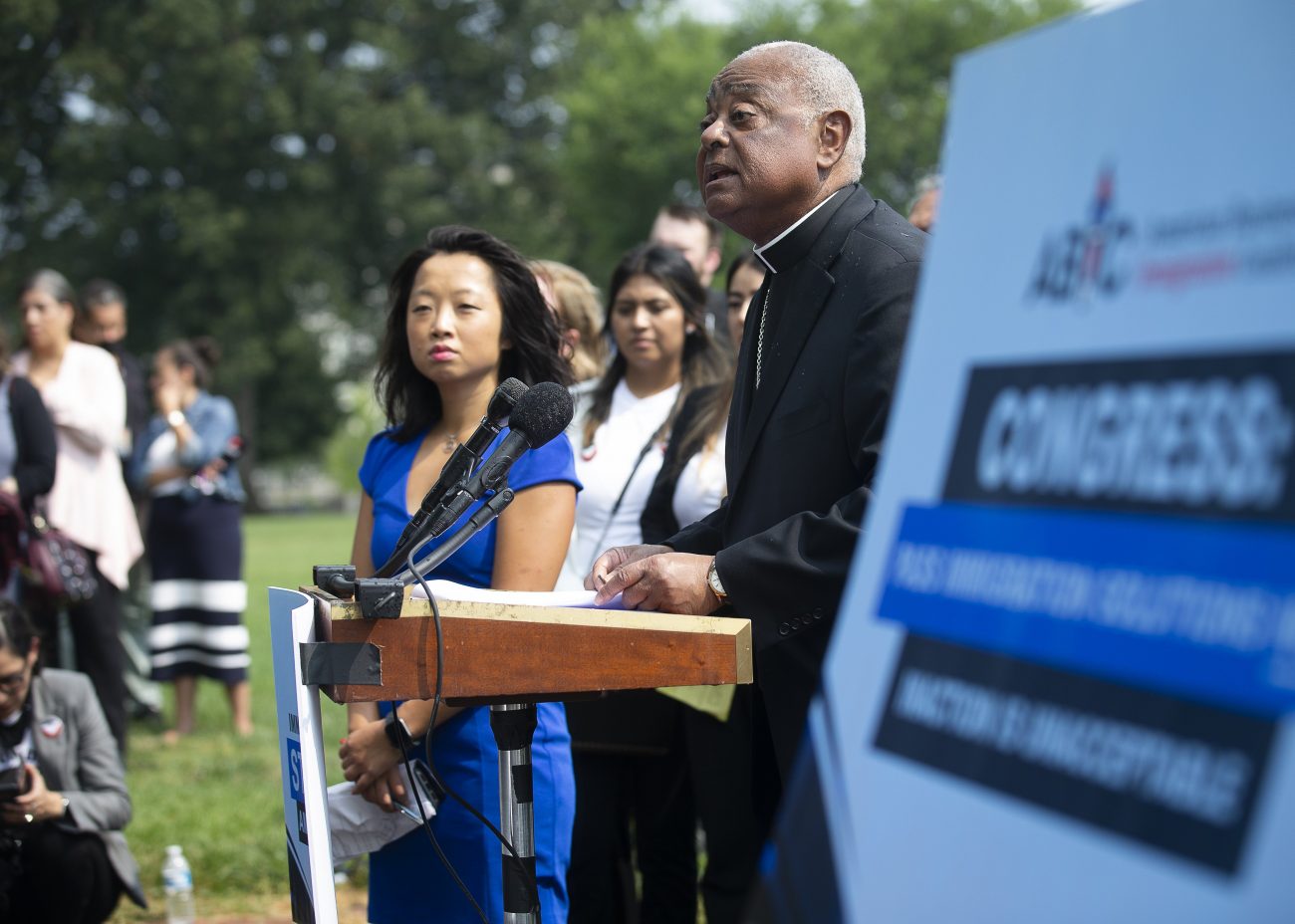 WASHINGTON (CNS) — At a Capitol Hill media event July 21, Cardinal Wilton D. Gregory of Washington joined immigrants, agriculture and business representatives and two U.S. senators in calling for legislative protections for immigrants that keep families together, including a pathway to citizenship.

Speaking on the lawn of the Capitol, Cardinal Gregory said that “like many of our own family members who made a new life here … we too are called to demonstrate kindness and a spirit of welcome to our migrant and refugee sisters and brothers, who are greatly contributing to our society through work and service.”

He added a note of gratitude “for their dedication and service to this country in positions classified as essential work, health care and military service” during the pandemic.

Cardinal Gregory’s remarks were bracketed by brief comments from Sen. Dick Durbin, D-Ill., and Senate Majority Leader Charles Schumer, D-N.Y., and by a recipient of DACA, the Deferred Action for Childhood Arrivals program, who aspires to become a police officer; representatives of the agriculture and poultry industries, including Arturo Rodriguez, former chairman of the United Farm Workers labor union; and a Michigan farmworker, an Ohio college president and immigrant advocacy organizations.

Cardinal Gregory said the 117th Congress “now has an opportunity to be courageous by addressing immigration in a comprehensive and productive way that will provide long-desired relief for those already living as Americans.”

He asked fellow Americans, “whatever political opinions may divide us,” to support legislation that will keep families together and protect children.”

That would include, he said, legislation that would allow Dreamers, as DACA recipients are known, those covered by Temporary Protected Status and Deferred Enforced Departure, seasonal agriculture workers “and other undocumented essential workers to integrate as fully recognized members of our society, whether through the enactment of stand-alone legislation or a broader legislative package.”

The cardinal explained that Catholic social teaching “upholds the principle that every person has the right to live in his or her own homeland, in security and dignity with opportunities for work. However, when the loss of these rights forces individuals to migrate to other lands, we must welcome them, protect them and generously share our abundance with them.”

In his remarks, the coalition’s co-chair, Don Graham, chairman of Graham Holdings, said he was attending “as a businessperson … but this is not primarily a business matter.”

He continued, saying that although the program featured two Democratic senators, “this is not primarily a partisan matter,” and that although Cardinal Gregory’s attendance meant there was “a prince of the church,” on hand, “this is not primarily a sectarian matter. He went on to joke: “Though I believe the cardinal is in daily consultation with the Lord and I believe he has his advice.”

Graham, who also chairs the board of TheDream.us and is the former publisher and chairman of The Washington Post, said immigration legislation is a matter of justice, fair treatment and, “above all, a moral matter.”

“America is not a cruel country, and Americans are not cruel people,” Graham added, “but what we are doing to Dreamers is cruel and it is wrong.”

Graham introduced Enrique Sanchez, a recent graduate of the University of Utah, who said he came to the United States from Mexico as a 2-year-old.

As a briefly intense rain shower swept through, blowing umbrellas inside out and drenching participants, Sanchez said that DACA has provided him, and others who have been raised in the United States but lack legal status, the chance to work and attend school “and contribute to this country.”

The event was hosted by the American Business Immigration Coalition, which represents 1,200 CEOs and employers. The group was sponsoring a national week of action focused on pressing members of Congress to pass the Durbin-Graham Dream Act. Sen. Lindsey Graham, R-S.C., is a co-sponsor of th measure.

In opening the press event, Rebecca Shi, the coalition’s executive director, said that in addition to participation by Durbin and Schumer, the members had met with 41 Republican senators and that potentially 13 to 15 of them might support immigration legislation. “There is a deal to be had,” she said.

Zapor writes for the Catholic Standard, newspaper of the Archdiocese of Washington.