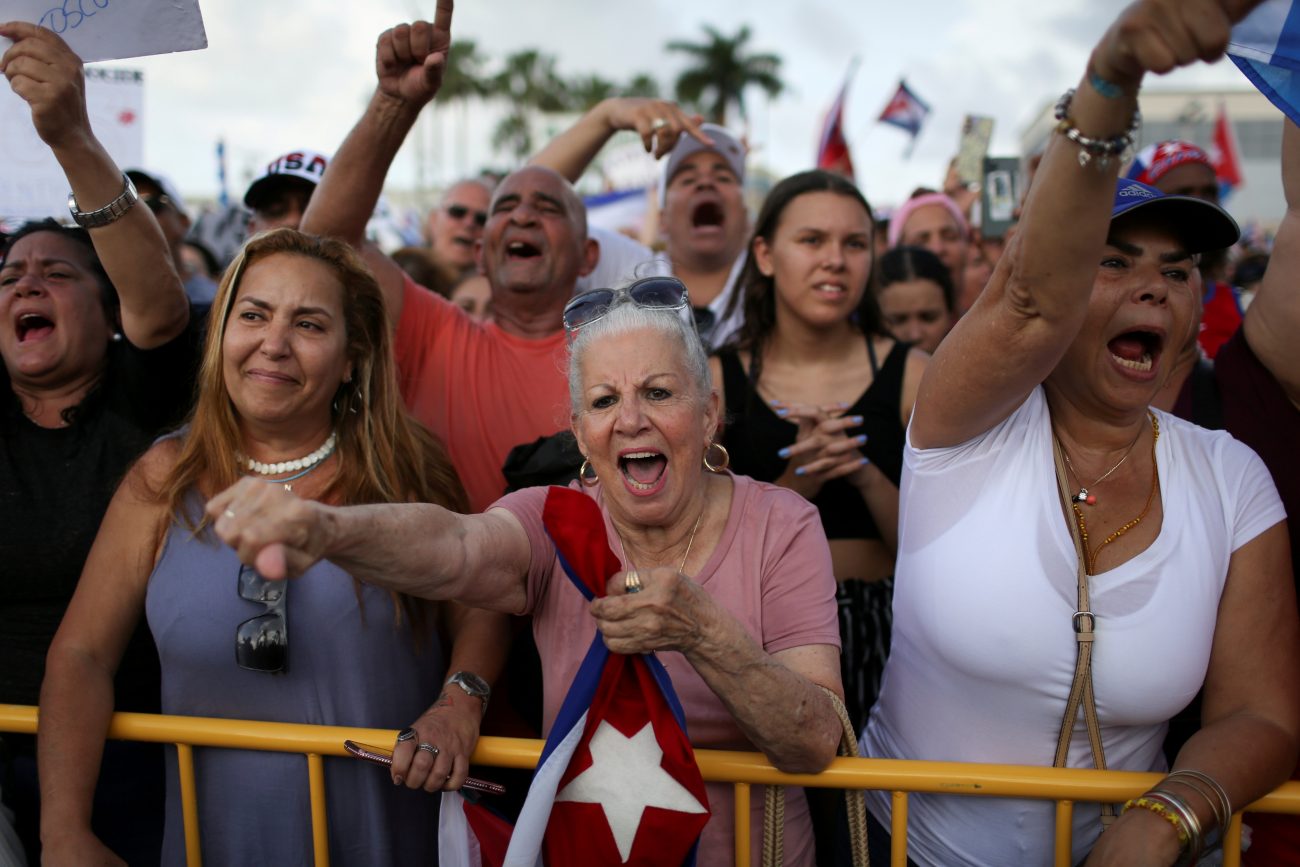 People in the Little Havana neighborhood of Miami rally July 14, 2021, in solidarity with protesters in Cuba. (CNS photo/Marco Bello, Reuters)

MIAMI (CNS) — With the hope that this time will be “the beginning of the end,” Cuban exiles gathered July 13 for Mass at the National Shrine of Our Lady of Charity in Miami to pray for freedom in their homeland, two days after unusual and unexpected protests broke out in different cities on the island.

Miami Archbishop Thomas G. Wenski celebrated the Mass for justice and peace — which the mayors of the city of Miami and Miami-Dade County attended. It marked the start of a novena of prayer for Cuba that continued the evening of July 14 and July 15. The novena is to take place every evening through July 22 at the shrine.

“The protests will continue,” said Bernardo Soto Sr., sports editor for Actualidad Radio 1040 AM. “The young people have reached the point where they cannot stand it anymore,” he added, citing lack of freedom, food, medicines and vaccines, along with an elevated rate of COVID-19 infections. “They are no longer afraid.”

His words were echoed by Father Fernando Hería, rector of the shrine. “The people can’t stand it anymore. It’s been 62 years,” he said, since the so-called “triumph of the revolution.”

He feels optimistic because those protesting — whose images spread around the world via social media — were young people. “They were born and raised 100% under the (communist) system. They see the injustices,” Father Hería said.

Injustices such as a video of Fidel Castro’s grandson driving his luxurious Mercedes at high rates of speed through the island’s streets, while the population lacks everything. 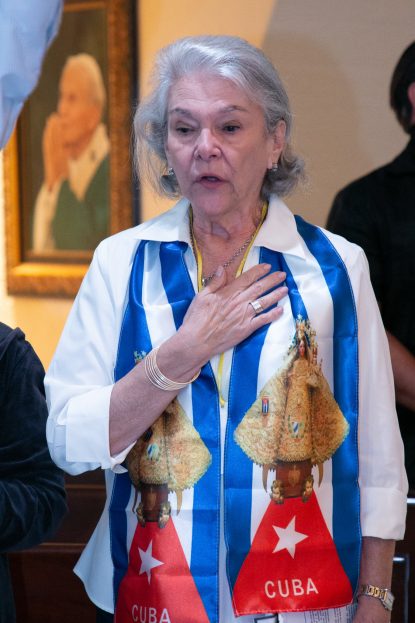 Conchita Gutierrez of Little Flower Parish in Coral Gables, Fla., sings the Cuban national anthem at the Shrine of Our Lady of Charity in Miami July 13, 2021. Archbishop Thomas G. Wenski of Miami celebrated Mass at the shrine two days after anti-government protests broke out all over Cuba. (CNS photo/Ana Rodriguez-Soto, Florida Catholic)

As a result of the protests, the people also saw images of soldiers clad in futuristic uniforms and with the most modern vehicles and equipment. The government can afford to pay for that but not for food and medicines for the people.

The authorities have reacted violently against some of the protesters, including a priest in Camaguey, Father Castor Jose Alvarez, who was wounded and detained for nearly 24 hours. That’s why it’s possible that “blood will be spilled” as a result of these protests, Father Hería said.

“We’re all praying fervently that won’t be the case,” said the priest, whose uncle was executed by Castro’s forces at the start of the revolution.

He always asked “that there not be vengeance but that there be justice and truth,” Father Hería recalled. The best thing would be that they “leave our people in peace. Take their millions and go,” he told the Florida Catholic, Miami’s archdiocesan newspaper.

“Reconciliation with justice” is what Pedro Camacho wants. He and his wife, Marta Trujillo, brought a Cuban flag to the Mass. Camacho arrived in the United States in 2005; his wife, whose parents were political prisoners, left Cuba via Venezuela in 1979. Camacho worked for the Cuban Church, in youth ministry and the Justice and Peace Commission in the Diocese of Camaguey.

“The reconciliation comes about when the guilty one recognizes himself as such and asks for forgiveness,” said Camacho, a member of St. Hugh Parish in Coconut Grove, Florida. 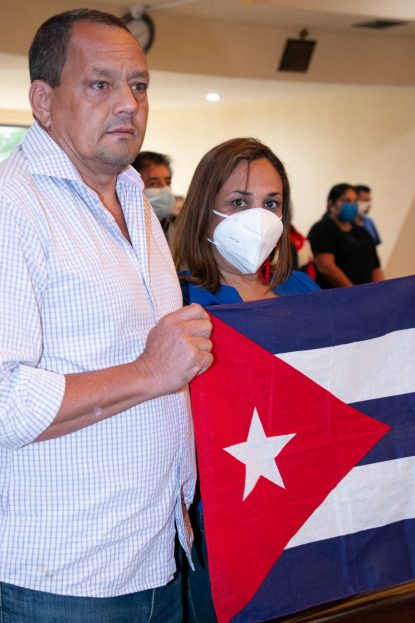 Pedro Camacho and Marta Trujillo of St. Hugh Parish in Coconut Grove, Fla., hold a Cuban flag at the Shrine of Our Lady of Charity in Miami July 13, 2021. Archbishop Thomas G. Wenski of Miami celebrated Mass at the shrine two days after anti-government protests broke out all over Cuba. (CNS photo/Ana Rodriguez-Soto, Florida Catholic)

He and Trujillo noted the unusual nature of the protests on an island where the government controls everything. “People went out on the streets together shouting freedom!” said Trujillo. “I’ve never before seen what I am seeing now.”

“It’s something new that yes, means a change in the people,” said Camacho. “The level of repression (used by the government against the protesters) expresses the alarm of those in power.”

And without social media it wouldn’t have happened, they noted, because that’s how people were able to learn about what was happening in the rest of the island and join the protests in different cities. “It’s a sign of the times,” said Camacho.

After the July 11 protests, the government quickly cut off access to the internet.

According to Camacho, Cubans such as himself, who have joined demonstrations in the diaspora, not only in Miami but throughout the U.S. and in other countries, are trying to “be the voice of those who don’t have voices, be the voice of the people of Cuba.”

But what happens after the protests? Will there really be a change in government? Will the Cuban people finally enjoy the liberty for which they yearn? Experts who study history and scrutinize events on the island don’t have the answers.

Trujillo said “we hope this is the beginning of the end. There are equal possibilities for change or no change. That’s why we’re here. … We have faith that, with God, everything is possible.”