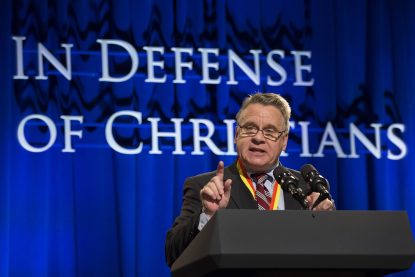 Rep. Chris Smith, R-N.J., is seen receiving the 2017 “Cedars of God” award during the annual In Defense of Christians Summit in Washington. In July 14, 2021, address to the International Religious Freedom Summit in Washington, Smith said China’s leader Xi Jinping and the Chinese Communist Party have exponentially increased persecution against religious believers “in ways not seen since the Cultural Revolution.” (CNS photo/Jaclyn Lippelmann, Catholic Standard)

WASHINGTON (CNS) — Charges of genocide — whoever the victim, whoever the perpetrator — “must be pursued,” Rep. Chris Smith, R-N.J., said July 14 at the International Religious Freedom Summit in Washington.

Smith, who referenced the genocides of Jews and Armenians as examples of 20th-century genocides, focused his summit remarks on China.

“Xi Jinping and the Chinese Communist Party have exponentially increased persecution against religious believers — including Christians, Muslims, Tibetan Buddhists and Falun Gong practitioners — in ways not seen since the Cultural Revolution,” he said.

Smith added that ever since the International Religious Freedom Act was passed and signed in 1998, China has been listed as a “country of particular concern” in human rights reports mandated by the law. China is “an egregious violator of religious freedom,” he said.

“Now Xi, apparently fearing the power of independent religious belief as a challenge to the Communist Party’s dominance, is trying to destroy or radically transform religion into the party’s slave, employing a draconian policy known as Sinicization,” Smith said.

“Under Sinicization, all religions and believers must comport with and aggressively promote communist ideology — or else,” he added. “To drive home the point, religious believers of every persuasion are harassed, arrested, jailed or tortured. Only the compliant are left relatively unscathed.”

“Xi Jinping’s genocide includes the forced disappearances of millions of Uighurs into concentration camps, the forced sterilization of Uighur women, forced abortion of their babies, and state abduction of Uighur children into orphanages far from home to be reared with non-Uighur upbringing,” he told the gathering, which met at a Washington hotel.

Smith said, “Shockingly, as it prepares to host the 2022 Winter Olympic Games, China’s leader Xi Jinping is committing genocide against the Uighur Muslims and other minorities in Xinjiang.” Smith conducted a congressional hearing in May on what he called “the Beijing Genocide Olympics.”

During the hearing, Smith said he declared that “it’s time to move the Games to another city and country or boycott.”

The day before Smith’s appearance at the summit, he conducted a separate hearing on human rights abuses in China during which one witness described the use of “tiger chairs” against Uighur and Kazakh detainees, as well as the systematic rape of Uighur women by Chinese authorities. Tiger chairs, made of metal, include handcuffs attached to the chair, in which detainees sit immobilized for what seems like countless hours or days.

In a related matter, Smith was rebuffed in a party-line vote of the House Foreign Affairs Committee on his attempt to give U.S. citizens the right to sue China over its lack of transparency during the coronavirus pandemic.

In a July 15 statement, Smith said he would seek to reintroduce his measure on the House floor during debate on the bill, the Ensuring American Global Leadership and Engagement, or EAGLE, Act.

PREVIOUS: Lifting dispensation is not enough to get Catholics back to in-person Mass

NEXT: Cuban exiles in Miami gather at their shrine to pray for homeland