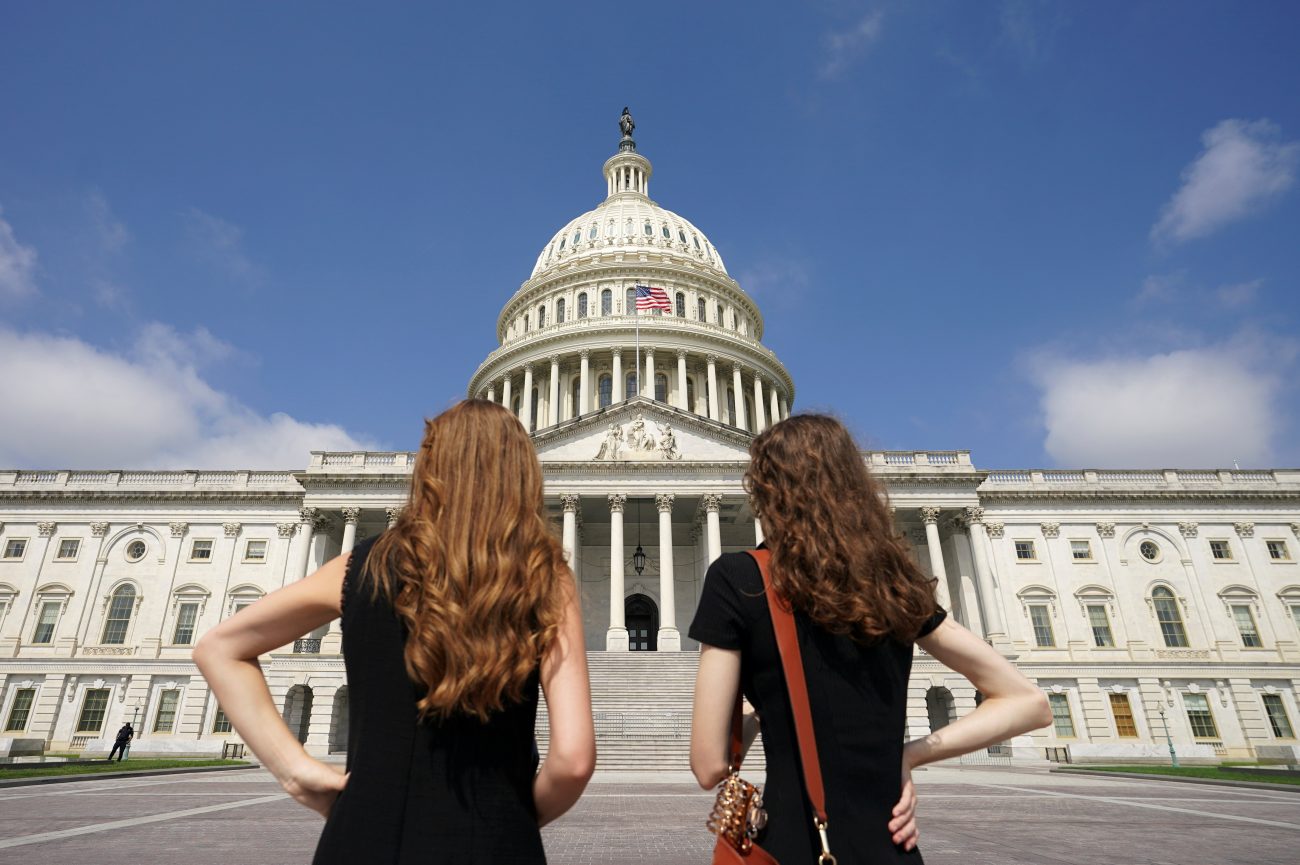 Women strike a similar pose while looking up at the dome of the U.S. Capitol in Washington July 12, 2021. (CNS photo/Kevin Lamarque, Reuters)

WASHINGTON (CNS) — As he offered three amendments to the State Department appropriations bill before the House July 28, U.S. Rep. Chris Smith, R-N.J., asked his House colleagues in remarks from the floor, “Where is the justice and empathy and compassion for unborn babies?”

“Rather than funding the death of a baby, I believe we must increase access to maternal and prenatal care and ensure access to safe blood and better nutrition,” said Smith, a Catholic, who is a co-chair of the Congressional Pro-Life Caucus.

“We must also expand essential obstetrical services, including skilled birth attendants, while improving transportation to emergency care facilities to significantly reduce maternal mortality and morbidity, including obstetric fistula,” he added.

Smith’s three amendments aimed to add back in protections for the unborn into the State Department funding bill, which passed the House Appropriations Committee without such language.

Later in the day, the House passed the Department of State, Foreign Operations and Related Programs Appropriations Act, or H.R. 4373, in a 217 to 212 vote — and without pro-life appropriations riders.

Smith’s amendments had to do with the so-called “Mexico City policy,” the Helms Amendment and the U.N. Population Fund.

President Joe Biden rescinded the “Mexico City policy” by executive order in January shortly after he was inaugurated. The policy blocked U.S. funding for nongovernmental organizations that perform or actively promote abortion as a form of family planning in other nations.

Smith’s amendment would have inserted “new text” to reinstate the policy and strike language in the State Department funding bill that would prevent any future president from changing the policy, which was first announced by President Ronald Reagan during an international conference on population in Mexico City in 1984.

Republican presidents since then have upheld it and Democratic presidents have overturned it. Opponents of the policy call it a “gag order.”

The Helms Amendment — what Smith called “the Hyde Amendment for the rest of the world” — has prohibited using U.S. taxpayer funds to directly pay for abortions in other countries since 1973.

“The bill before us today, however, completely reverses Helms,” Smith said. “My second amendment — co-sponsored by 46 members — simply reinstates it. … The underlying pro-abortion language in this bill is far outside the mainstream of American values.”

“U.S. foreign assistance and the foreign entities that we fund with billions of dollars of grant money should consistently affirm, care for, and tangibly assist women and all children — all children, including unborn babies –regardless of age or condition of dependency,” he said.

Regarding the U.N. Population Fund — formerly the U.N. Fund for Population Activities, or UNFPA — the congressman asked House members to support his amendment to make the U.N. agency “ineligible to receive U.S. funds appropriated in this bill.”

“The UNFPA ought to be at The Hague (international criminal court) giving an account of its support, promotion and complicity over the past 40 years in massive crimes against women,” Smith said.

He cited as one example the U.N. agency’s monetary support of China’s child limitation policy, which has led to forced abortions, including sex-selection abortions to eliminate unborn females because that society values men over women.

China’s policy has “led to the worst gender disparity in any nation in history,” Smith said.

He also cited a recent Marist Poll showing that 77% of Americans are opposed to using taxpayers’ monies to pay for abortion in other countries. The poll found that 55% of Democrats, 85% of Independents and 95% of Republicans are of this opinion.

The State Department appropriations bill was one of several spending bills the House was considering the week of July 26, including for Agriculture; Energy, Financial Services and General Government; Interior, Environment and related agencies, Labor, Health and Human Services and Education; Military Construction, Veterans Affairs and related agencies; Transportation; and Housing and Urban Development.

The House Appropriations Committee spent the previous weeks marking up the dozen or so spending bills for fiscal year 2022 on largely party-line votes to advance the measures to the House floor.

And in marking them up, committee members left out the Hyde, Weldon and Helms amendments and other language — which, taken together, ban federal funding of abortions (with a few exceptions) domestically and abroad and prevent discrimination against health care providers who do not want to participate in abortion.

The Appropriations Committee’s actions came after Biden released his proposed budget May 28 without the Hyde Amendment, a move decried by the U.S. Catholic bishops, the Catholic Health Association, several national pro-life organizations, and Smith and many other pro-life House members.

Biden, a Catholic, was a longtime supporter of the amendment, but in June 2019 during a Democratic campaign fundraiser in Atlanta, he announced he now is against it in light of Republican-led efforts in some states to pass laws restricting abortion.

Hyde, first enacted with strong bipartisan support 45 years ago, outlaws federal tax dollars from directly funding abortion except in cases of rape, incest or when the life of the woman would be endangered.

Congress must reauthorize the Hyde Amendment annually as an attachment to the appropriations bill for the Department of Health and Human Services. Hyde language also has been part of a dozen spending bills for decades.

On July 27, Smith called on the House to preserve Hyde and other pro-life appropriations riders to H.R. 4502, the Departments of Labor, Health and Human Services, and Education, and Related Agencies Appropriations Act of 2022, as they debated the measure. The package of bills passed 219-208 late July 29.

“The bill under consideration removes several long-standing pro-life protections and advances provisions that would force U.S. taxpayers to pay for abortion on demand,” he said, noting the absence of the Hyde and Weldon amendments.

“Similarly, the rule under consideration precludes even a vote on the Cole Amendment, which would restore the Hyde Amendment and the Weldon Amendment, he said, referring to an amendment sponsored by Rep. Tom Cole, R-Okla.

Also, Smith’s amendment prohibiting funding of abortion under the Federal Employees Health Benefits Program also was not renewed as it has been every year since he first sponsored it in 1983.

Earlier Smith had presented four pro-life amendments to the House Rules Committee, and Cole presented his amendment to that committee as well.

In an email July 29, Smith told Catholic News Service that he, Cole and other House members “pushed hard in the Rules Committee and in the House debates to defend the unborn and their mothers from the violence of abortion,” but they were ultimately unsuccessful.

“A total of 14 pro-life amendments were ruled out of order by the Democratic majority,” he said in his July 27 remarks on the House floor. “All is not lost, however. I remain hopeful — confident — that the Senate will reinstate all current pro-life protections, like the Hyde Amendment.”