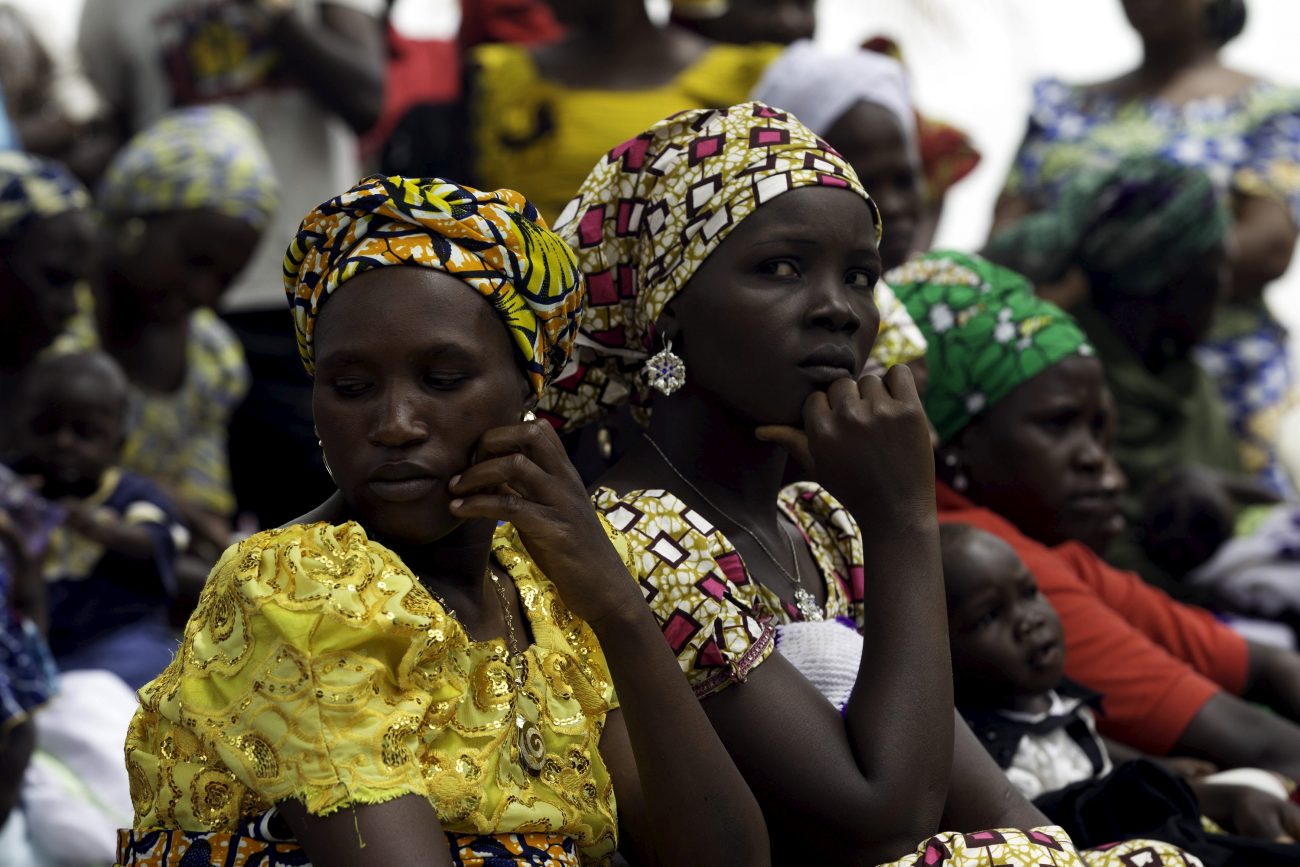 Displaced members of the Chibok community in Abuja, Nigeria, gather April 14, 2015, to mark the first anniversary of the mass kidnapping of 276 schoolgirls from a secondary school in Chibok by Boko Haram militants. As of July 16, 2021, the whereabouts of 112 girls remained unaccounted for. (CNS photo/Afolabi Sotunde, Reuters)

WASHINGTON (CNS) — Many people may not think about religious repression since it doesn’t happen in the United States. For those who may argue that it does, then it doesn’t happen on the scale and terror of those living in countries with authoritarian regimes.

One of the most compelling first-person accounts came from Joy Bishara, who grew up in the northern Nigeria town of Chibok, as a member of the Church of Christ.

Bishara was one of the 276 Christian teen girls abducted by the Islamist terror group Boko Haram from their school in 2014. “I had heard stories of Boko Haram, but I had never seen them face to face.”

“They burned the whole school to the ground and led us away from Chibok,” Bishara said. “We had to sit on top of each other because of how tight the truck was.”

She added, “I was glad the male students were not at school, because the story is that Boko Haram will kill all the men,” leaving the women no choice but to “marry a Muslim man and have their children.”

While in the truck, Bishara said, “I just heard a voice saying, ‘Jump out.’ The trucks were very tall. I ended up coming to the opinion that if I did not jump out, I did not know what they were going to do with me. Even if I die, at least someone will be able to find my corpse.”

After her escape, she said, she ran into two other Chibok girls who also had jumped out of their trucks. Today, there are still 112 girls whose whereabouts remain unaccounted for.

“Whatever happened to the Chibok girls in 2014 was just the beginning,” Bishara said. “When you go to the government to complain, they say they are going to do something about it, but they never do. … All The Muslim people get all the help that they need from the government, and Christians never get any help.

“For people in Chibok, that’s not the worry. They stay at home because the economy is closed and there’s COVID.” That just means, though, according to Bishara, that “Islamic groups can come in and kill them in their own comfort zones.”

Bishara said of herself and her fellow students, “We had committed no crime. Our crime was going to school and getting an education. Education is a taboo, so school is a taboo.” Bishara is now studying in the United States.

Bishara’s was just one testimony among many told during the July 13-15 conference.

Wai Wai Nu, an ethnic Rohingya Muslim woman who became founder of the Women’s Peace Network, talked of experiences in Myanmar; speakers referred to the country as Burma during the summit’s plenary sessions.

“I was born and grew up in Rakhine state in the western part of Burma,” Nu said. “Our existence has become a crime due to our ethnicity and religion.”

She added, “For decades, the Burmese government has denied our history, our identity, our citizenship, and denied us our basic human rights: to travel, to marry, to go to school, to have access to health care and to practice religion, and the list goes on.”

Nu said, “I was born to insecurity and persecution. My life has been subject to several forms of discrimination and persecution, including being in prison for seven years at the age of 18 with my entire family. Yet I feel I’m a privileged one in my community. … There was nothing comparable to the 1.1 million victims and survivors in Bangladeshi refugee camps who had to flee.”

“These survivors and victims witnessed the most horrific experiences, including the throwing of children into fire, rapes of women with their husbands watching in front of them, and torching hundreds of villages,” she said. “Each of us is a testament to the genocide that we endure every day.”

Nu said, “Ending the military’s impunity will not only help the survivors of the Rohingya genocide but will also send a signal to other regimes around the world that their actions have consequences.”

Nu said she feels connected to ethnic and religious minorities elsewhere who are targeted by their governments” condemning “the people in power, especially the authoritarian regimes” using repression to “sustain their power.”

“It is now more important than ever to uplift the religious minorities and act to protect religious freedom,” Nu said.

“We have been doing everything our capacity day and night, to protect tour freedom. It is now up to those in power to act,” she added.

NEXT: U.S. using list of ‘shame’ to root out Central American corruption