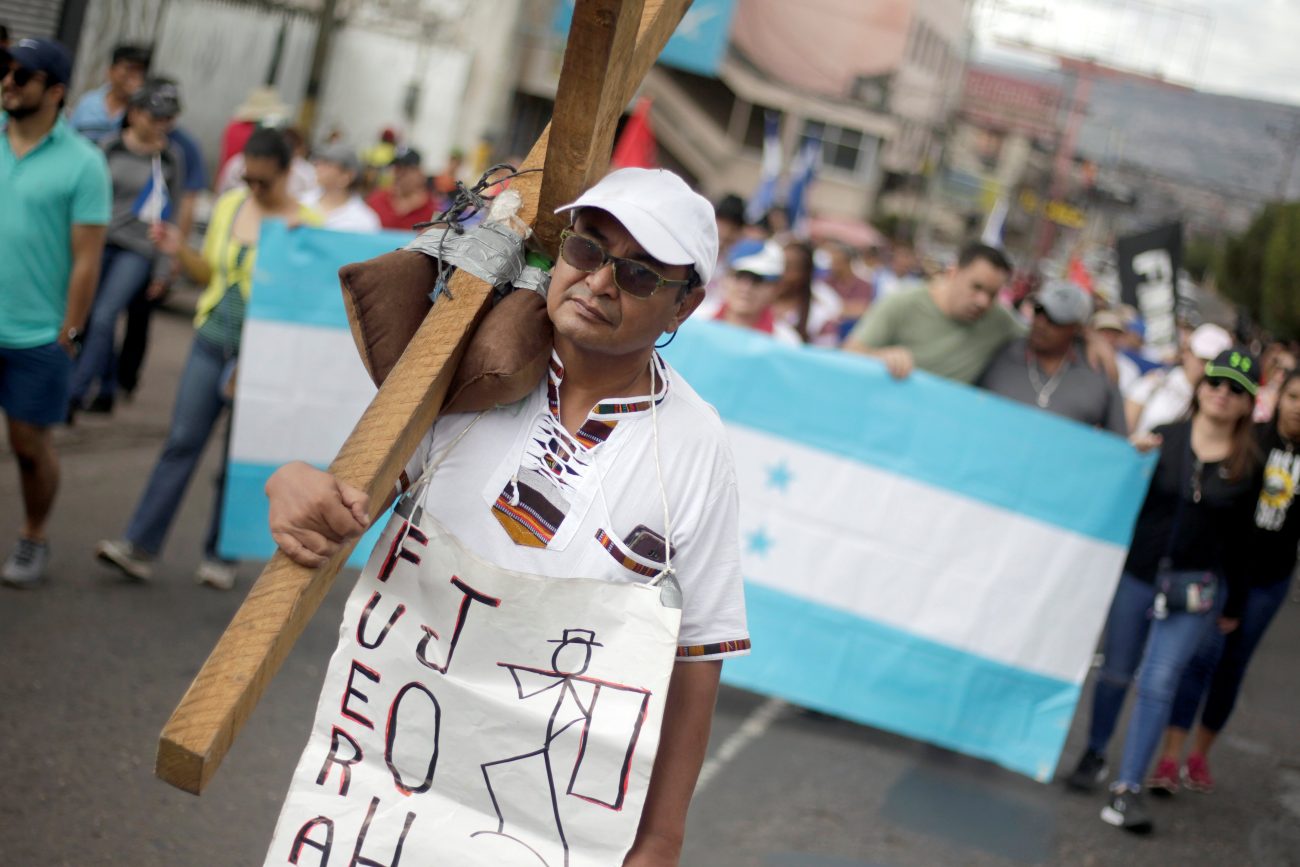 WASHINGTON (CNS) — It’s a list no one wants to be part of.

On July 1, the U.S. Department of State released a long-awaited roster of “corrupt and undemocratic actors” from El Salvador, Honduras and Guatemala.

In total, it listed 55 notable Central Americans — judges, a former president and many high-ranking members of government — that, the U.S. government says, have been involved in corruption, undermined democracy or obstructed justice.

Corruption is an important matter to the U.S. under the Biden administration, whose plan to reduce immigration from those countries involves rooting out graft and other malfeasance in the governments of the region.

Over the years and decades, officials from the region have pocketed foreign aid, undermined democracy to stay in power and even accepted money from cartels and gangs — problems that, immigrants to the U.S. say, have forced them to emigrate en masse.

“Actions that undermine the rule of law and democracy in Guatemala, Honduras, and El Salvador, and their repercussions on the lives of people in these countries, contribute to irregular migration and destabilize entire societies,” said Secretary of State Antony J. Blinken in a press statement announcing what has become known as the “Engel List.”

The list was created in late 2020 as part of the Northern Triangle Enhancement Engagement Act sponsored by its namesake, former Rep. Eliot Engel of New York, who was then chair of the House Foreign Affairs Committee.

Ironically, some TV broadcasters in El Salvador struggling to pronounce it call it the “angel” list, though actions described in it are less than angelic.

In Guatemala, Nester Vasquez Pimentel, who was recently appointed to the country’s Supreme Court even as he was under investigation for influence-peddling, appeared on the list. U.S. officials allege that he has “undermined democratic processes or institutions by abusing his authority to inappropriately influence and manipulate the appointment of judges to high court positions.”

Carolina Recinos, current chief of staff for Salvadoran President Nayib Bukele, is one of four high-ranking members of the Salvadoran Cabinet appearing on the list and is said to have been involved in money laundering and misusing public funds for personal benefit, the State Department says.

“The intent is mostly to ‘name and shame’ individuals the U.S. considers involved in corrupt activities. Individuals on the list are denied entry visas to the United States and are subject to other sanctions, which could include freezing of assets,” said Orlando J. Pérez, a professor and scholar on Latin American politics and dean of the school of liberal arts and sciences at the University of North Texas at Dallas, in a July 7 email exchange with Catholic News Service.

Though the list was supposed to shame those appearing in it as well as those associated with them, it has been undermined and attacked.

“Thanks for the list but in El Salvador, we have one of our own,” tweeted Bukele, denigrating the list a few days after its release, making no mention of his Cabinet members on it.

The list also includes Rolando Castro, his secretary of labor, alleged to have “obstructed investigations into corruption and undermined democratic processes or institutions in efforts to damage his political opponents.” Castro said he would no longer visit the U.S. in protest because his rectitude had been impugned. His visa, by then, however, had already been revoked.

Honduran President Juan Orlando Hernández said the dignity of those who appeared on the list must be respected because there was no proof of their wrongdoing.

And while Guatemala’s President Alejandro Giammattei has remained largely silent on the topic, a few days before Vice President Kamala Harris’ June 7 visit, he criticized a top official at the office of the country’s Special Prosecutor Against Impunity, saying he was “biased.”

The University of North Texas’ Pérez said the effectiveness of the list is “yet to be determined,” but part of its purpose may be to pressure leaders in the region by naming close collaborators, friends, supporters or political allies.

“The U.S. has used similar tactics before, namely in Venezuela with limited success,” Pérez said. “One problem, which some have pointed to, is that there doesn’t seem to be a clear strategy for why certain individuals are included and others excluded from the list — the rationale behind the names is not published.”

For example, Pérez said, Guatemala’s roster excludes members of Giammattei’s Cabinet “some of which have been accused of corruption” and Honduran President Hernández also is not on the list, even as he “is among the most corrupt politicians in the region.”

U.S. authorities have said they are looking into Hernández’s connections with drug cartels, including allegations that he took a bribe from the Mexican drug lord known as “El Chapo.”

Catholic Church officials in Central America have pointed out the link between corruption and immigration.

In a June meeting in Illinois, between bishops from the U.S. and Central America, Bishop Guido Charbonneau, of Choluteca, Honduras, spoke of how Central America has become a drug corridor, bringing with it violence and increased corruption, which prompts people to leave.

Honduras, in essence, he said, has become a “narco-state,” with the government doing little to stem migration because it pads the economy as people send money home.

In July 2019, El Salvador’s Cardinal Gregorio Rosa Chavez, during a Mass in San Salvador to remember migrants who had died in the journey north, said there was a factor involving governments causing migration that many didn’t like to address.

“There is another cause that is not spoken about, which is corruption,” he said. “All the money that has been stolen and was necessary for people to have a better life. That part is important to denounce because it is from the root that the drama of migration takes place.”

It’s a message the Biden administration has heeded, and though the list is a first step toward addressing part of the problem, Pérez said there were other factors at play and that there’s also more to be done than just naming an assortment of wrongdoers.

“The Engel List is a positive step in the right direction, but much more needs to be done. The list has to be coupled with a sustained multidimensional strategy that focuses on broader and deeper root causes of migration, which include structural inequality, crime and violence, and political instability,” he said. “I think the Biden administration has taken some positive steps, but a lot more needs to be done.”

In a July 14 press call advocating for immigration protections for Guatemalans in the U.S., Ricardo Barrientos, senior economist with the Central American Institute for Fiscal Studies in Guatemala, said corruption in the country is “an insidious issue that harms government response” to other problems: unemployment, education, health, crime and malnutrition.

“There should be no question why the youngest (Guatemalans) want to leave the country,” he said.

NEXT: Spending bills without Hyde seen as move to expand abortion on demand