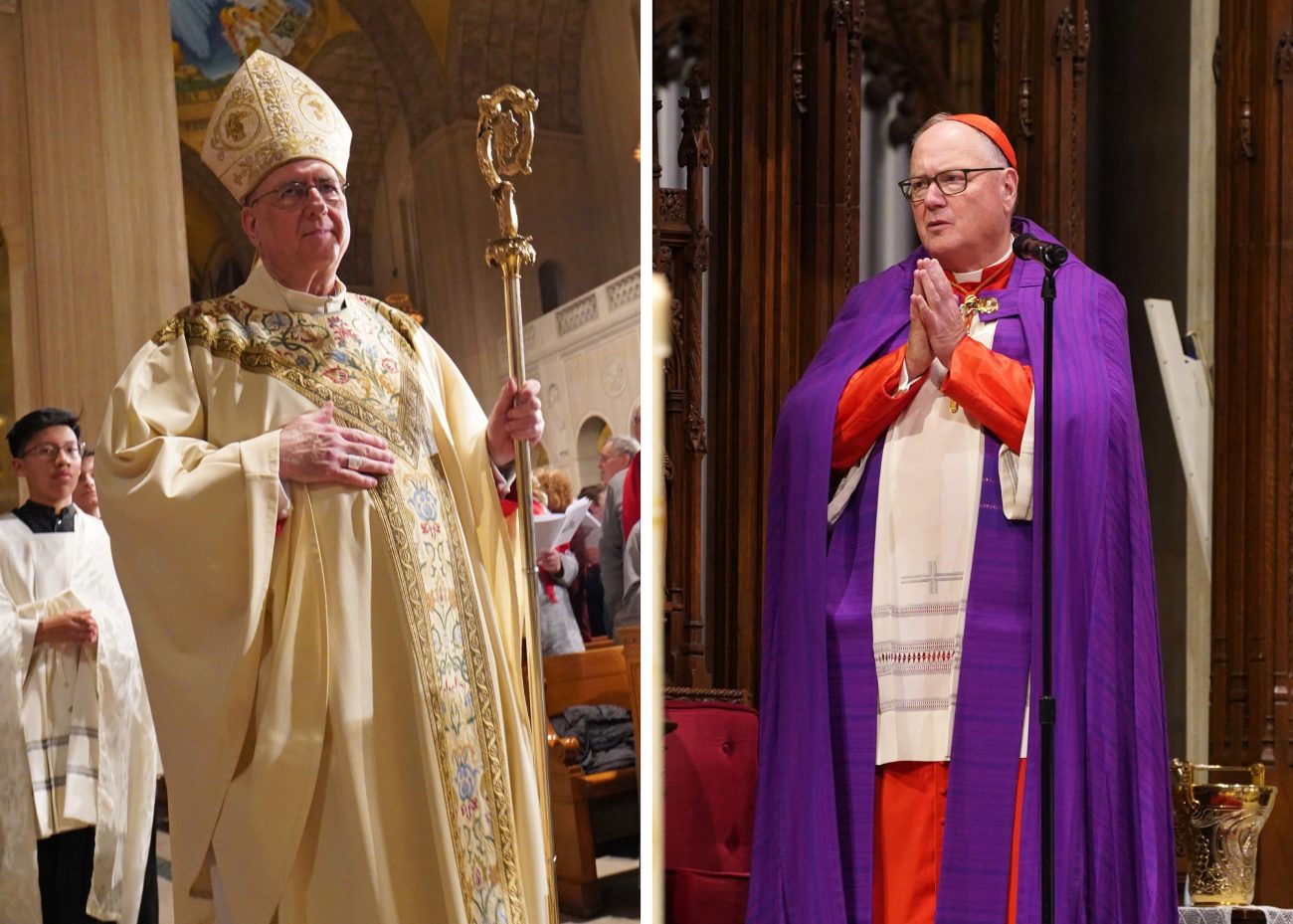 Archbishop Joseph F. Naumann of Kansas City, Kan., chairman of the the U.S. Conference of Catholic Bishops' Committee on Pro-Life Activities, and New York Cardinal Timothy M. Dolan, chairman of the USCCB's Committee for Religious Liberty, are seen in this composite photo. (CNS composite; photos by Long Island Catholic and Gregory A. Shemitz)

WASHINGTON (CNS) — The House Committee on Appropriations is poised to mark up “the most extreme pro-abortion appropriations bill we have seen” because it excludes the 46-year-old Hyde Amendment and other long-standing bipartisan provisions that prevent tax money from being spent on abortion, two U.S. bishops’ committee chairmen said July 13.

If the Labor, Health and Human Services, Education and Related Agencies appropriations bill is marked up as, it is “effectively mandating health care professionals to participate in abortion, and forcing American citizens to pay for abortion with their tax dollars,” said Cardinal Timothy M. Dolan of New York and Archbishop Joseph F. Naumann of Kansas City, Kansas.

“By eliminating the Hyde Amendment, and other Hyde-like policies, the financial fruits of Americans’ labor would advance the destruction of the smallest, most vulnerable humans,” they said in a joint statement.

In late June, Archbishop Naumann and Bishop David J. Malloy of Rockford, Illinois, chairman of the bishops’ international policy committee, issued a similar statement on Hype provisions being left out of proposed spending bills for the District of Columbia, several federal agencies and U.S. foreign operations.

Hyde first became law in 1976 to prohibit federal funds appropriated through the Labor Department, the Health and Human Services Department and related agencies from being used to cover abortion or fund health plans that cover abortion except in cases of rape, incest or when the life of the woman would be endangered.

Hyde has been reenacted in spending bills every year since it was first passed.

Also left out of the spending bill addressed by Cardinal Dolan and Archbishop Naumann is the Weldon Amendment, which has been included in the annual appropriation for HHS since 2005. It allows health care providers as well as insurance plans to refuse to provide abortions, pay for them or refer women to abortion clinics.

“Eliminating the Weldon Amendment would be an egregious violation of conscience rights by forcing individuals and entities to perform, pay for, or otherwise participate in an abortion against their beliefs,” they said.

“We implore the House Committee on Appropriations to reverse course on these bills that currently expand taxpayer funding of abortion, and to restore the long-standing, bipartisan Hyde provisions and Weldon Amendment that have saved millions of lives and protected conscience rights,” Cardinal Dolan and Archbishop Naumann said.

“These bills include many other provisions and funding for critically needed services that we support,” they added. “Americans’ tax dollars should be used for the common good and welfare of all, not to finance abortion or force Americans to violate deeply held beliefs.”

In Congress, after hearings on a bill are completed, the measure is then considered in a committee session known as the “mark-up” session. At this time, amendments may be offered to the bill, and the committee members vote to accept or reject these changes.

Cardinal Dolan and Archbishop Naumann called on U.S. Catholics and “all people of goodwill to contact their legislators and make their voices heard” on the need to retain these amendments.

“The lives of millions of vulnerable children, and the well-being of their mothers, depend on our advocacy,” they said.

They also urged people go to www.NoTaxpayerAbortion.com and sign a petition on the site before July 16 to send “an urgent message” to Congress to preserve the Hyde Amendment. The petition is sponsored by the U.S. bishops’ Committee on Pro-Life Activities.

“Abortion is not health care nor a ‘human service’ to anyone,” Cardinal Dolan and Archbishop Naumann said. “Rather, abortion is inhumane. It is a painful death to an innocent baby, and often leaves women physically harmed and emotionally devastated.”

In recent days, a number of other Catholic leaders also have urged Congress to retain Hyde, including Cardinal Joseph W. Tobin of Newark, N.J., Baltimore Archbishop William E. Lori, and the New York State Catholic Conference on behalf of Cardinal Dolan and the other Catholic bishops of the state.

NEXT: Oregon Catholic’s single-minded focus is on competing in Olympic marathon