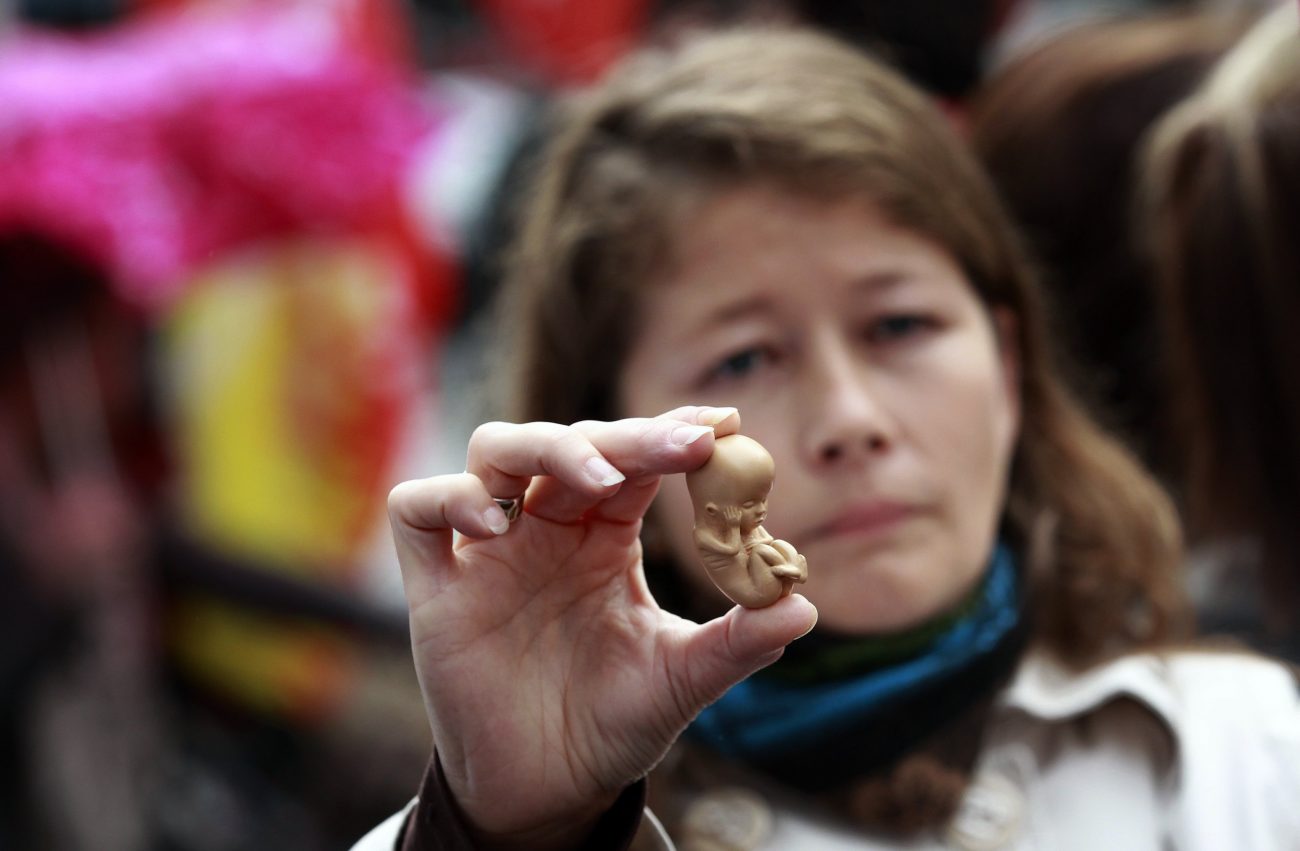 A pro-life advocate is pictured in a file photo holding up a model of a 12-week-old embryo during a protest outside the Marie Stopes clinic in Belfast, Northern Ireland. Catholic bishops in Northern Ireland are saying unilateral moves by the British government to force Northern Ireland's Department of Health to introduce abortion services up to 12 weeks of pregnancy threaten the region's peace process. (CNS photo/Cathal McNaughton, Reuters)

Legislation that permits abortion in the region in all circumstances up to 12 weeks of pregnancy was introduced in London in 2019, over the heads of the Northern Ireland legislative assembly, which has consistently refused to legislate for abortion. The move was widely criticized at the time, and all of Northern Ireland’s representatives in Westminster voted against it.

The church leaders described the latest move to extend abortion to Northern Ireland as “unjust,” “gravely disquieting” and injurious to relations between the Catholic and Protestant communities who elect the power-sharing government brought about by the 1998 peace agreement.

“It is the latest in a line of decisions by the current Westminster government which we believe threaten the fragile balance of relationships at the heart of the Belfast (Good Friday) Agreement,” said a statement by Archbishop Eamon Martin of Armagh and the four other bishops in Northern Ireland. They also criticized politicians who have welcomed the “unilateral imposition” and urged Catholics to see abortion as a key election issue ahead of next year’s polls for the assembly.

“As our society prepares in coming months to engage in the ultimate expression of democratic participation — the election to our local assembly — we encourage all Catholics, and those who share our view on the inviolability of all human life, to reflect carefully on the issues raised by this succession of unilateral impositions by the Westminster government,” they said.

“We encourage everyone who believes in the equal right to life and compassionate care for a mother and her unborn child to ask local candidates and political parties to explain their position on these interventions and on this most fundamental of all issues.”

The bishops said that the shared search for peace in Northern Ireland “is driven in no small part by our collective rejection of the brutality and demeaning of human dignity that occurs when the right to life is diminished in any way.”

“In unilaterally imposing this direction on the local Northern Ireland Assembly to provide abortion services, it is as if the Westminster government, and those local parties who have supported them, believe the answer to the issue of providing compassionate care for a woman and her unborn child in pregnancy can be framed simply and exclusively as a ‘health care issue,'” they added.

“Absent from the discussion, however, are the thousands of unborn children who have no legal protection and whose humanity is excluded from the political equation.

“It is for this reason that the argument for the protection of all human life can never be abandoned or referred to human rights experts alone.

“Westminster has imposed an unjust law. Christians, and all people of good will, can never stand silently by and fail to raise their voices at any attempt to ignore completely the fact that unborn children are human beings worthy of protection.”