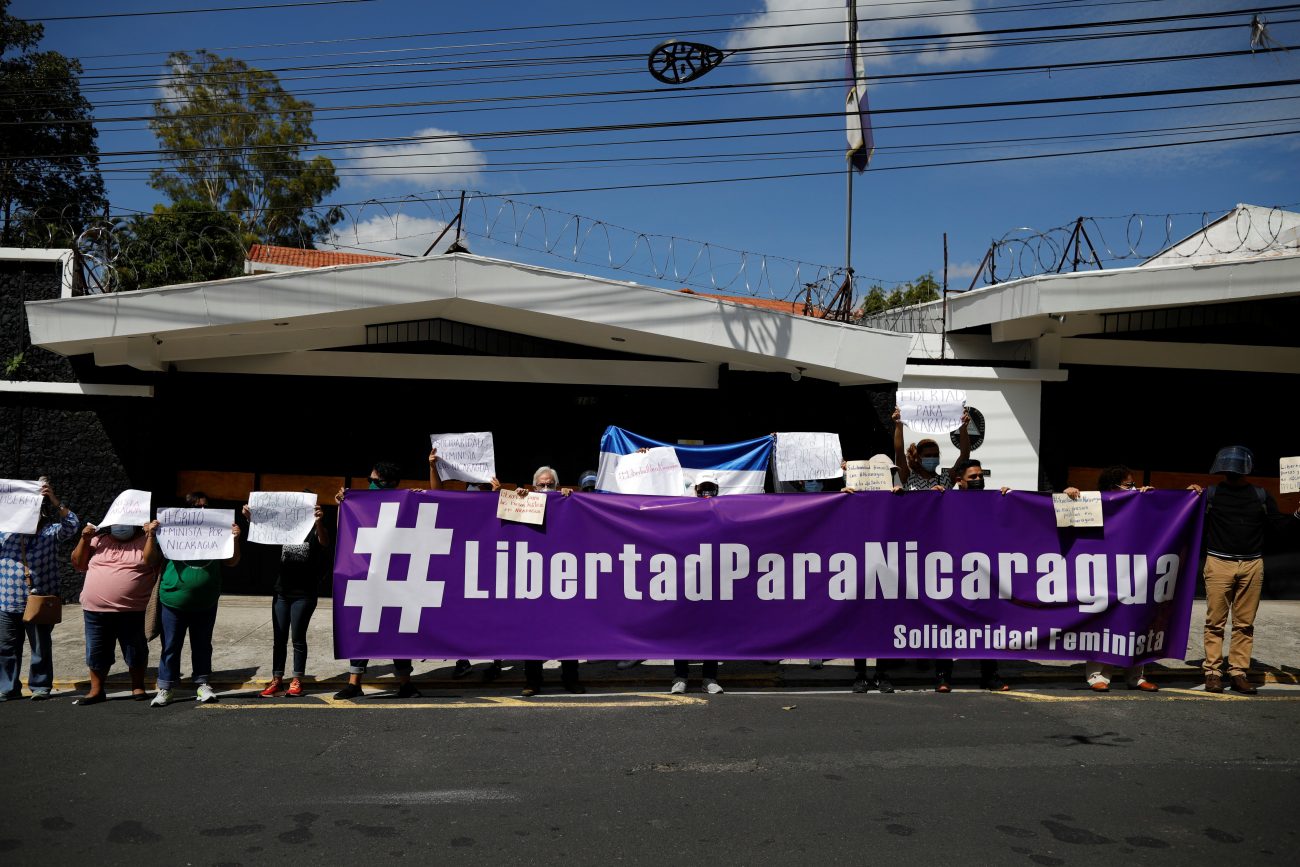 Women protest in front of the Nicaraguan embassy in San Salvador, El Salvador, June 30, 2021, to demand an end to the repression and the release of political prisoners in Nicaragua. (CNS photo/Jose Cabezas, Reuters)

WASHINGTON (CNS) — The political, economic and social crisis in Nicaragua “is reaching a flashpoint” and “is more than likely to lead to more violence and destabilization in the country,” Rafael Estrada said at a recent hearing on Capitol Hill in Washington.

The Central American country’s “constant persecution of political opponents and independent journalists is unprecedented,” said Estrada, who is president of the Nicaraguans for Security and Prosperity Foundation.

He was one of several witnesses at a July 21 hearing sponsored by the Tom Lantos Human Rights Commission on President Daniel Ortega’s government and its political prisoners, which the committee described as “the human cost of repression in Nicaragua.”

Witness Victoria Cárdenas testified that because her husband, Juan Sebastián Chamorro, dared to speak out against Ortega’s oppression, “the regime has also persecuted and harassed me and my family.”

Chamorro is a candidate for president. The elections are scheduled for Nov. 7.

“It is clear that Ortega is using every part of Nicaragua’s institutions, including its judicial system,” she said, “to not only persecute those who challenge the government, but also their family members.”

Berta Valles spoke about what her husband, Félix Maradiaga, has faced as a presidential candidate.

“For years, Felix has been a target of attacks by the Ortega regime because he speaks truth to power. He has been beaten, confined to house arrest and threatened,” she said. “For months, he endured 24/7 surveillance by the police. They have tried again and again to silence him, but he never stands down.”

The issues raised by witnesses echoed the grave concerns about Nicaragua expressed six weeks earlier by the country’s Catholic bishops about a wave of politically motivated arrests that have sidelined opposition figures, media members and government critics ahead of the fall elections.

“We must avoid the institutionalization in our homeland of arbitrary and illegal restrictions of citizens’ freedoms and the persecution of the opposition and media outlets,” the bishops said in a June 10 letter.

“We prefer and want a democratic system for Nicaragua,” in which there is a “division of powers of the state” because “it is the principle of the rule of law … the principle in which legislation is sovereign and not the arbitrary will of men,” the bishops said.

“It is necessary to build a Nicaragua based in peace, justice and respect for human rights, rejecting all that is contrary to these principles and working together, conscious of the pillars of peace, justice and forgiveness,” they said.

After the bishops’ letter was released, police arrested at least five high-profile critics of Ortega by using recently approved laws that criminalize information the government considers false and that outlaw receiving foreign funds to carry out political activities.

In April 2018, the Ortega regime cracked down on widespread protests by the people of Nicaragua, leading to the emergence of an opposition movement calling for a wide range of democratic reforms, including Ortega’s resignation.

“Despite the protests, Ortega remains in office as hundreds of Nicaraguans have been killed, imprisoned or have fled the country,” according to the Lantos commission.

Also speaking at the Lantos commission hearing was Bianca Jagger, a Nicaraguan social and human rights advocate and a former actress. Jagger currently serves as a Council of Europe goodwill ambassador and is chair of the Bianca Jagger Human Rights Foundation.

She noted Ortega’s longtime disregard for human rights, saying: “Through his years in power, he has dismantled all legal and democratic institutions in Nicaragua. His objective is to perpetuate his power at any cost by establishing a new tyrannical dynasty.”

“The cruelty of the Ortega regime is a consistent cruelty — political prisoners span the gamut of activists on the political Left, often dissident Sandinistas themselves, to those on the political right,” said Rep. Chris Smith, R-N.J., who co-chairs the Lantos commission with Rep. James P. McGovern, D-Mass.

Smith praised the witnesses for their courage and their “commitment to democratic principles and a resistance to tyranny.”