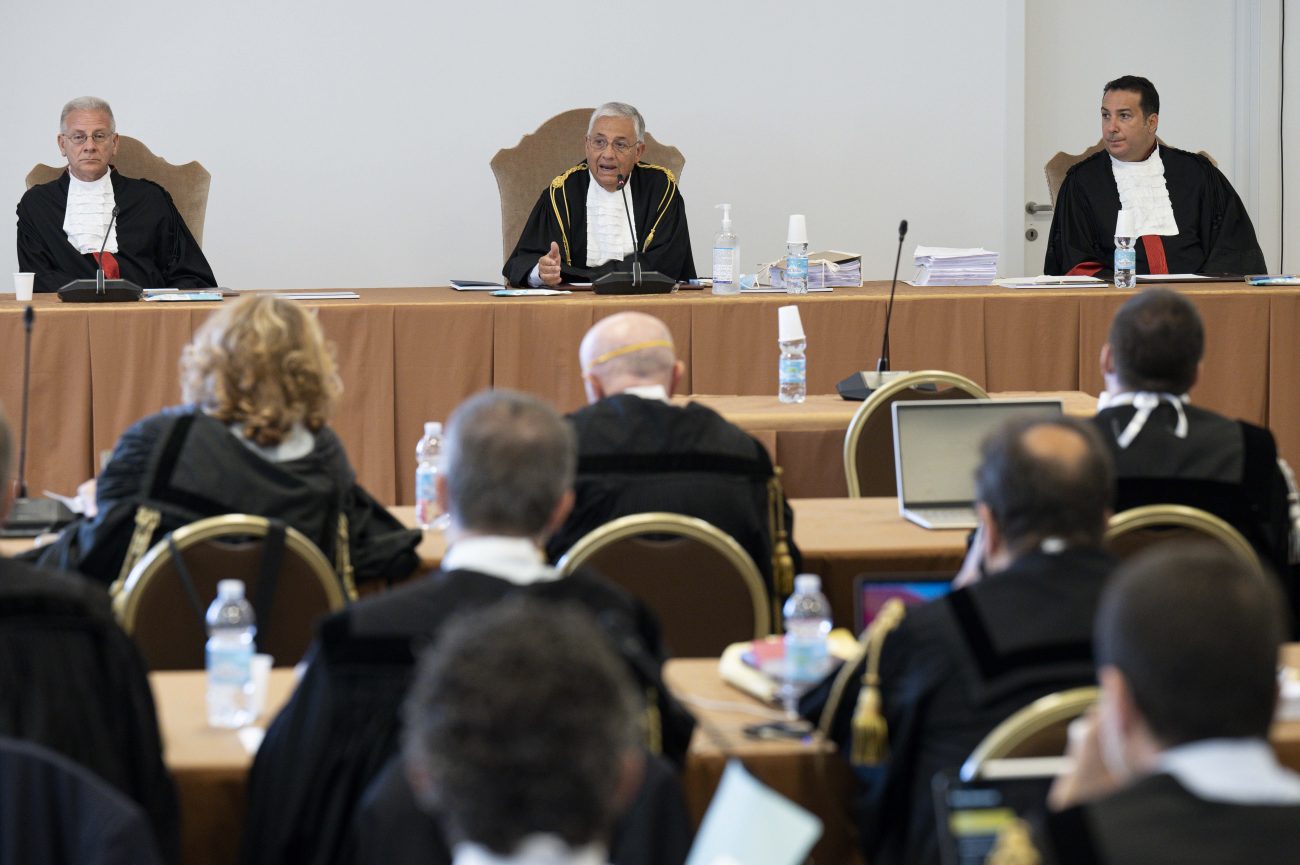 The judges of the Vatican City State criminal court -- Venerando Marano, Giuseppe Pignatone and Carlo Bonzano -- face dozens of lawyers in a makeshift Vatican courtroom July 27, 2021, as the trial of 10 defendants in a financial malfeasance case begins. Cardinal Angelo Becciu is among the defendants. (CNS photo/Vatican Media)

VATICAN CITY (CNS) — On the first day of a Vatican trial involving alleged embezzlement, money laundering and abuse of office, lawyers for 10 defendants, including Cardinal Angelo Becciu, questioned the Vatican’s jurisdiction in prosecuting their clients and insisted on needing more time to prepare their defense.

After seven hours of listening to the defense lawyers and a lawyer for the Vatican Secretariat of State, Giuseppe Pignatone, president of the Vatican City State criminal court, said the trial would resume Oct. 5, when it would address the objections raised by the defendants’ lawyers.

Most of the charges stem from a Vatican investigation into how the Secretariat of State used $200 million to finance a property development project in London’s posh Chelsea district, a project that incurred millions of dollars in debt.

Speaking to journalists after the hearing concluded, Cardinal Becciu, a central figure in the Vatican purchase of the building, said he was present for the hearing because he was “obedient to the pope, who sent me to trial.”

“I am serene, I feel calm in my conscience, I have faith that the judges will know well the facts, and my great hope is that certainty they will recognize my innocence,” he said.

The Italian cardinal also told journalists he ordered his lawyers to file a lawsuit against Msgr. Alberto Perlasca, the former head of the Vatican Secretariat of State’s administrative office, and Francesca Chaouqui for defamation.

Msgr. Perlasca initially was seen as a possible suspect after Vatican police seized documents, computers and even floppy disks from his home and office in 2020. However, the report stated that he requested to speak to investigators.

According to the trial indictment, Msgr. Perlasca provided investigators “with a precious contribution for the reconstruction of some central moments relating to the case of the London property.”

In 2016, Chaouqui, a member of the former Pontifical Commission for Reference on the Economic-Administrative Structure of the Holy See, was found guilty by a Vatican court of leaking confidential documents about Vatican finances and was given a 10-month suspended sentence.

Of the 10 people on trial, the only defendants present for the opening day were Cardinal Becciu, former prefect of the Congregation for Saints’ Causes, and Msgr. Mauro Carlino, the cardinal’s former secretary. The other eight defendants were represented by their lawyers.

Msgr. Carlino is accused of extortion and abuse of office.

Fabrizio Tirabassi, a former official at the Secretariat of State, is accused of corruption, extortion, embezzlement, fraud and abuse of office.

A lawyer representing Enrico Crasso, a longtime investment manager accused of embezzlement and money laundering, said the accusations brought by Vatican prosecutors “would not be possible in any other legal system in the world.”

Paola Severino, the lawyer representing the Secretariat of State and the Administration of the Patrimony of the Holy See, argued against the lawyer’s claims that the court was a “special tribunal.”

“It is a wrong message that this is an ‘ad hoc’ tribunal constituted for this case,” she said. “This is the Vatican criminal court.”

René Brülhart and Tommaso di Ruzza, respectively former president and former director of the Vatican’s financial watchdog agency, now known as the Supervisory and Financial Information Authority, also are among the defendants.

Lawyers for several other players involved in the majority stake purchase of the London property also were present at the first hearing, including counsel for Gianluigi Torzi, an Italian broker who served as the middleman in the development deal, and London-based Italian financier Raffaele Mincione, the owner of the London property, who is accused of embezzlement, fraud, abuse of office, misappropriation of funds and money laundering.

Torzi faces several charges, including the extortion of $17 million from the Vatican as payment for the majority stake and his role in brokering the deal. Nicola Squillace, a Milan-based lawyer who helped broker the London property deal, also was indicted on charges of fraud, embezzlement and money laundering.

Cecilia Marogna, an Italian political analyst who allegedly was hired as a consultant by Cardinal Becciu, was indicted on charges of embezzling money through a humanitarian organization she ran in Slovenia. The organization, Logsic Humanitarne Dejavnosti, D.O.O., was also included in the Vatican’s indictment.

NEXT: In South Sudan, church works to keep young people off streets, drugs