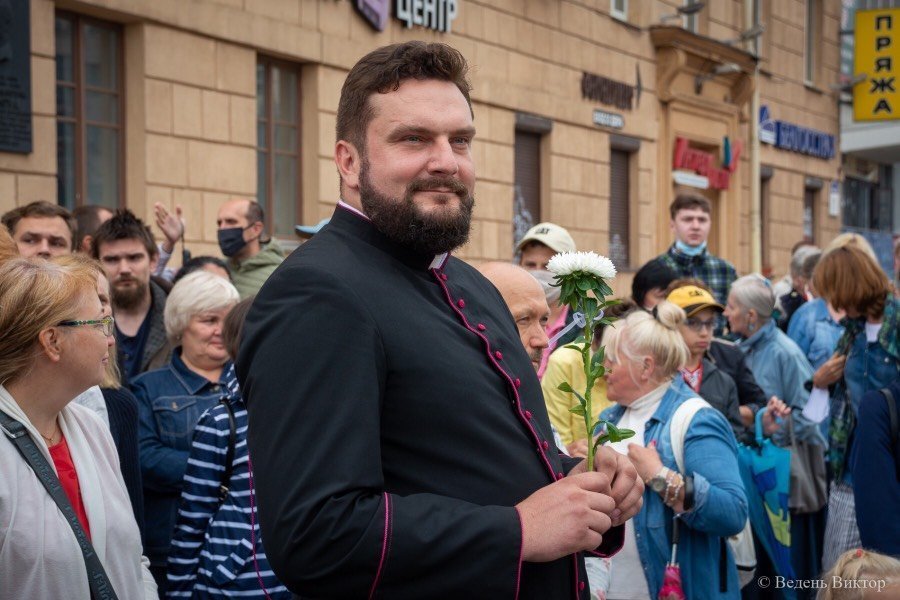 “We don’t really know what the police were seeking,” Father Yuri Sanko, spokesman for the Minsk-based bishops’ conference, told Catholic News Service July 8, four days after police arrived at Minsk’s Blessed Virgin Mary Cathedral after the main Sunday Mass. “Although they spoke with the cathedral clergy, no one was arrested and nothing confiscated, and we haven’t heard of other similar incidents.”

On July 3, President Alexander Lukashenko had warned Catholics against singing a hymn, “Magutny Bozha” (“Almighty God”), which has been a symbol for anti-regime protests.

In a July 7 Facebook post, Auxiliary Bishop Yury Kasabutski of Minsk-Mohilev said police officers had complained “some norm of law had been violated” by the hymn, but had appeared not to “understand themselves” what this meant.

The bishop added that the hymn, composed in 1947, was “first of all a prayer for homeland and people,” and had been proposed as a new national anthem in 1993 by a parliamentary commission.

“This hymn has also become a prayer used in worship by Catholics, Orthodox and Protestants, as well as being sung by people not identifying with any religion,” Bishop Kasabutski said.

“Every prayer carries incredible power and is capable of performing great miracles. If a certain prayer has great power, then the devil will fight with the greatest force to prevent people from using it.”

However, an online editor from Belarus’ Eastern Catholic Church said the director of a church choir had been arrested with at least 20 others in the western city of Brest after singing the hymn.

“Thank God, no similar actions by law enforcement agencies have so far been reported,” Ihar Baranouski told CNS July 8. “But the authorities may have decided to test the reaction of Catholics in the capital’s main church in this way.”

In a speech on Belarus’ July 3 state holiday, which commemorates the Soviet army’s 1944 capture of Minsk from occupying Germans, Lukashenko warned Christians against singing the hymn.

“The pain from crimes committed during the Great Patriotic War is still in our hearts — yet some people want to turn history back, rehabilitate their grandfathers and complete the business they started by destroying a sovereign state,” Lukashenko said. “They have moved to the sacred places of our statehood under the banner of fascist mercenaries — as our mass media report, they now seek to pray in churches with this ‘Almighty God.'”

Father Sanko said the hymn was “not prohibited” and would continue to be sung.

“The president can say what he likes — this isn’t our concern,” he said. “This hymn has been sung openly and devotionally for decades, and people can have opinions about it. But it’s also been sung on state occasions, and no previous government has had any issue with it.”

Baranouski noted that although some choirs had refrained from singing the hymn, “Everyone in Belarus knows this majestic religious anthem carries no fascist propaganda whatsoever, so most Catholics have so far ignored the head of state’s threat.”

“They feel it’s unnecessary to listen to what they consider illegal state interference in their prayer life and hope Lukashenko’s latest emotional outburst, caused by the country’s general crisis, will soon be forgotten.”

The United States and European Union tightened sanctions against the Belarus regime in late June, in response to human rights violations since Lukashenko’s disputed August 2020 reelection and the forced landing of a Ryanair commercial flight in May.

In a July 7 statement, the country’s Christian Vision association said a prominent Catholic priest, Father Viachaslau Barok, who served 10 days’ detention in December, had fled Belarus after police raided his home July 1 and accused him of involvement in an “unauthorized public event.”

It added that Father Barok’s YouTube channel had more than 9,000 subscribers and said his “politically motivated” harassment was intended to intimidate “all clergy and laity in Belarus who speak out against human rights violations, lawlessness and violence.”

“This is a clear interference in the activities of the Catholic Church — it violates constitutional rights to freedom of conscience and expression,” Christian Vision said.

NEXT: Archbishop: Decade after independence, South Sudan ‘is bleeding slowly’