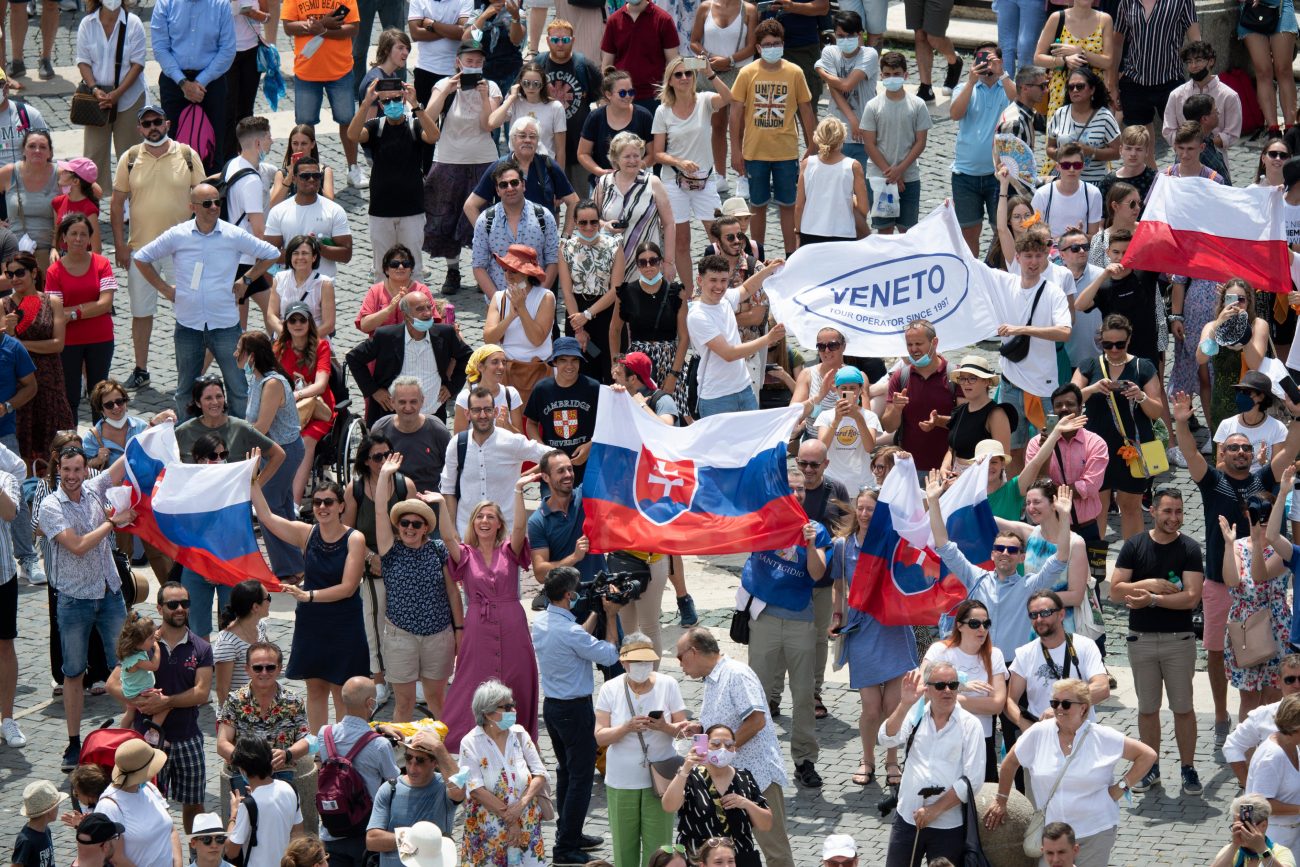 Pilgrims holding the Slovak flag cheer in St. Peter's Square at the Vatican July 4, 2021, as Pope Francis announces he will visit their country Sept. 12-15 after stopping in Budapest, Hungary, to celebrate the closing Mass of the International Eucharistic Congress. (CNS photo/Vatican Media)

VATICAN CITY (CNS) — Before going to the hospital for colon surgery July 4, Pope Francis told a crowd in St. Peter’s Square that he would be visiting Hungary and Slovakia Sept. 12-15.

With pilgrims from Slovakia holding their country’s flag aloft in St. Peter’s Square, the pope told the crowd, “I am happy to announce that from Sept. 12 to 15, God willing, I will travel to Slovakia to make a pastoral visit.”

But, first, he said, the morning of Sept. 12 “I will celebrate the concluding Mass of the International Eucharistic Congress in Budapest,” Hungary.

“From the bottom of my heart, I thank those who are preparing this journey, and I am praying for them,” he said. “Let us all pray for this journey and for the people who are working to organize it.”

The Vatican press office said the Slovakia trip would include stops in the cities of Bratislava, Presov, Kosice and Sastin, but did not immediately provide details of the pope’s program.

Eduard Habsburg, the Hungarian ambassador to the Holy See, replied on Twitter to people who asked why the pope was going to Hungary only for a Mass, but then would make a full pastoral visit to Slovakia.

“Hungary, a few hours, Slovakia, a few days. Why?” he tweeted. The pope “is doing exactly what he has been invited for — in Budapest, the final Mass of the @iec2021Budapest (the eucharistic congress), in Slovakia, an extended visit to the country.”

In a statement shared by the Vatican-based secretariat of the International Eucharistic Congress, Cardinal Peter Erdo of Esztergom-Budapest said, “The Catholic community is waiting for the arrival of the Holy Father with great joy and love. We are praying for his visit to be the sign of hope and a new beginning after the abatement of the pandemic.”

While the visit was scheduled to be brief, the cardinal said the pope’s visit was significant since, for the past two decades, popes had sent representatives to the congress rather than participating themselves.

“The last time a pope participated in the international congress was 21 years ago in Rome, where Pope John Paul II was present,” the statement said.

The International Eucharistic Congress generally is held every four years and includes workshops, catechesis, adoration, a solemn procession with the Blessed Sacrament and a closing Mass. The Budapest gathering originally was scheduled for 2020 but was postponed a year because of the COVID-19 pandemic.

PREVIOUS: Pope out of bed, walking after surgery at Rome hospital

NEXT: Bishops thank those who lobbied Parliament against abortion proposals