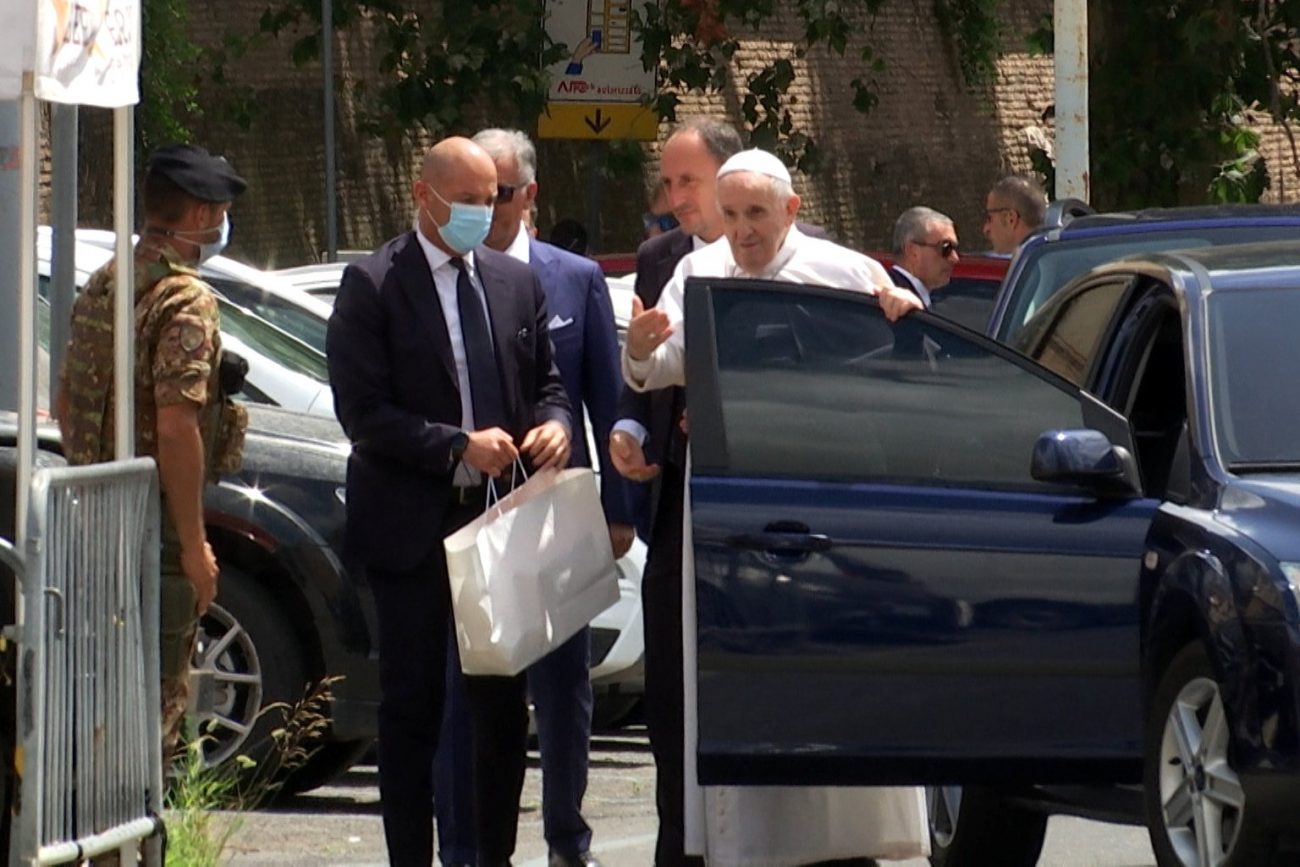 Pope Francis greets police officers before entering the Vatican after being discharged from Rome's Gemelli hospital following his recovery from colon surgery in this screengrab taken from a video July 14, 2021. (CNS photo/Cristiano Corvino, Reuters TV screengrab)

In a statement released July 14, Vatican spokesman Matteo Bruni said that after leaving the hospital midmorning, the pope visited the Basilica of St. Mary Major to say a prayer of gratitude before the icon of “Salus Populi Romani” (health of the Roman people).

The pope thanked Mary “for the success of his surgery and offered a prayer for all the sick, especially those he had met during his stay in hospital,” the statement said.

After praying at the basilica, the pope returned to his Vatican residence, the Domus Sanctae Marthae, Bruni said.

The pope was admitted to Gemelli hospital in the early afternoon July 4 to undergo “a scheduled surgical intervention for a symptomatic diverticular stenosis of the colon.”

He underwent a three-hour left hemicolectomy, which is the removal of the descending part of the colon, a surgery that can be recommended to treat diverticulitis, when bulging pouches in the lining of the intestine or colon become inflamed or infected.

Initially expected to remain in the hospital for seven days, the Vatican said July 12 that the pope would “remain hospitalized for a few more days in order to optimize his medical and rehabilitation therapy.”

During his stay, the pope continued working and spent time visiting patients at the hospital.

In his Sunday Angelus address July 11 from the 10th floor balcony of his suite of rooms at the hospital, Pope Francis said his time in the hospital gave him the opportunity to experience “once again how important good health care is” and that free, universal health care, especially for the most vulnerable, is a “precious benefit (that) must not be lost.”

“It needs to be kept,” the pope said. “And for this, everyone needs to be committed because it helps everyone and requires everyone’s contribution.”

The evening before his release, Pope Francis visited Gemelli’s pediatric oncology ward, which also is on the 10th floor, and greeted the young patients, their families and the staff.

While Pope Francis usually takes July as his vacation month, he is scheduled to lead the recitation of the Angelus at noon July 18 and to celebrate Mass July 25, the first World Day for Grandparents and the Elderly.

NEXT: Study finds 221,000 Catholics left the church in Germany during pandemic