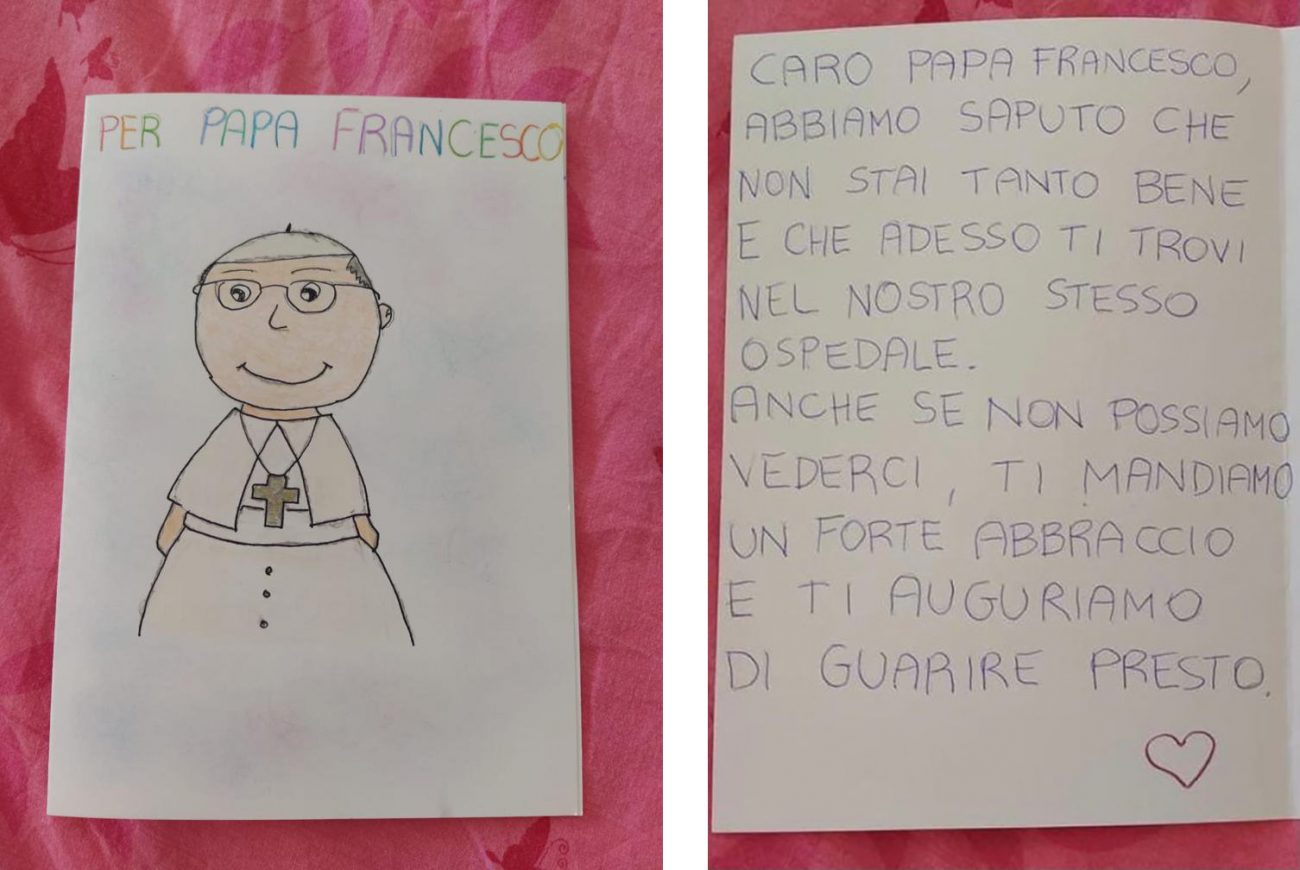 A patient in the pediatric oncology ward of Rome's Gemelli hospital made a card for Pope Francis, who is recovering there from colon surgery. The child wrote, "Dear Pope Francis, we heard you are not so well and that you are in our hospital now. Even if we cannot see each other, we send you a big hug and hope you will heal quickly." (CNS photo/Courtesy Policlinico Gemelli)

VATICAN CITY (CNS) — Although still hospitalized, Pope Francis has resumed working and celebrated Mass for his caregivers in the small chapel that is part of the suite of rooms reserved for the popes at Rome’s Gemelli hospital, the Vatican press office said July 9.

“He walked in the corridor and resumed his work, alternating it with moments of reading texts,” said the statement issued on the fifth morning of his hospitalization for colon surgery.

Matteo Bruni, director of the press office, also announced that Pope Francis will lead the midday recitation of the Angelus prayer July 11 from his room on the 10th floor of Gemelli hospital.

“Following the brief episode with a slight temperature (July 7), the Holy Father is without fever,” he added.

The morning after the running a temperature, the pope’s doctors performed a CT scan of his abdomen and chest as well as routine exams to ensure that he was not suffering from an infection, a common complication of intestinal surgery.

The results of the scan and exams were negative, the Vatican press office had said July 8.

Pope Francis had sent a message of “paternal closeness” to the “young patients in the nearby pediatric oncology and children’s neurosurgery wards,” Bruni said.

Early July 9, the Gemelli hospital released photos of a card one of the young oncology patients had made for the pope. The cover features a simply drawing of Pope Francis and the inside has the message: “Dear Pope Francis, we heard you are not so well and that you are in our hospital now. Even if we cannot see each other, we send you a big hug and hope you will heal quickly.”

“The Holy Father gives thanks for the many messages of affection and closeness that he receives daily and asks that we continue to pray for him,” Bruni said.

The Vatican’s July 7 midday bulletin, issued before the pope’s temporary temperature, said the doctors had removed his intravenous drip, and that “the post-operative progress of His Holiness Pope Francis continues to be regular and satisfactory.”

“The Holy Father has continued to eat regularly, and infusion therapy has been suspended,” it added.

Announcing that the pope had arrived at the Rome hospital July 4, the Vatican had said he was to undergo “a scheduled surgical intervention for a symptomatic diverticular stenosis of the colon.”

The next morning, the Vatican said the surgery lasted three hours and included “a left hemicolectomy,” the removal of the descending part of the colon, which can be recommended to treat diverticulitis, when bulging pouches in the lining of the intestine or colon become inflamed or infected.

Three days after surgery, the Vatican said, “the final histological examination has confirmed a severe diverticular stenosis with signs of sclerosing diverticulitis,” a hardening of the tissue. The statement seemed to indicate that the biopsy showed no cancerous cells.

Pope Francis is expected to remain in the hospital at least until July 12. Since St. John Paul II was shot in 1981, the Gemelli hospital, part of the Catholic University of the Sacred Heart, has maintained a suite of rooms for use by the pope.

Hospitalized there on several occasions, St. John Paul would lead the Sunday Angelus from his room when able and even would go to the window to greet people gathered in the square in front of the hospital’s entrance. 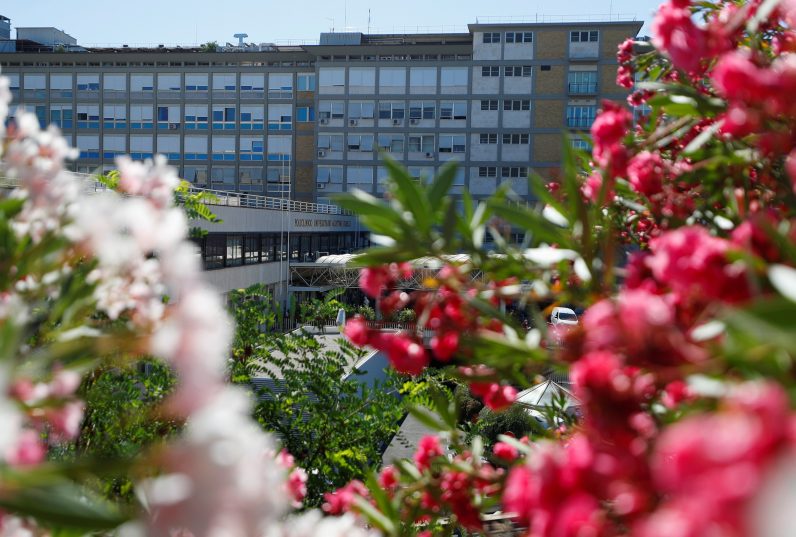 This is a view outside Gemelli hospital in Rome where Pope Francis had a prescheduled colon surgery July 4, 2021. Pope Francis’ recovery from colon surgery continues to go well, the Vatican said. (CNS photo/Guglielmo Mangiapane, Reuters)

NEXT: Pope to remain in hospital ‘a few more days,’ Vatican says