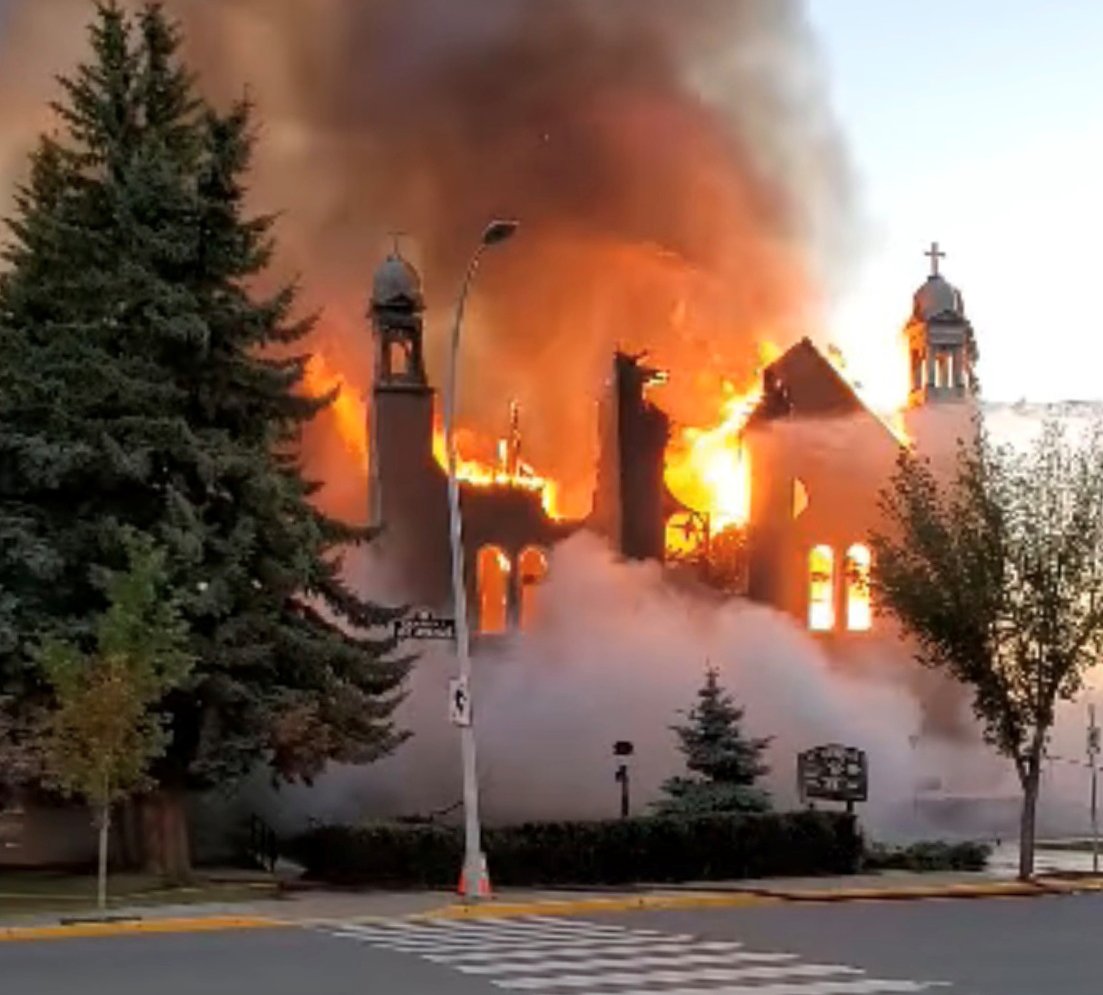 Flames engulf St. Jean Baptiste Church in Morinville, Alberta, June 30, 2021, in this still image taken form video obtained from social media. The early morning fire destroyed the century-old Catholic church near Edmonton and is being treated as suspicious by Royal Canadian Mounted Police. (CNS photo/Diane Burrel, social media via Reuters) EDITORS: THIS IMAGE HAS BEEN SUPPLIED BY A THIRD PARTY. MANDATORY CREDIT. NO RESALES. NO ARCHIVES.

VANCOUVER, British Columbia (CNS) — More churches across Canada have been destroyed or damaged by fires that police are describing as suspicious or suspected arson.

The fire in Morinville, about 20 miles north of Edmonton, is being investigated as arson, Staff Sgt. Tom Kalis told Canadian Broadcast Corp. News.

Edmonton Archbishop Richard Smith released a video message on YouTube in which he called the news “heart-rending” and called for prayers for parishioners of St. Jean Baptiste. He also said the archdiocese is working with parish priests and police on arson prevention protocols.

The fires occurred as news has emerged of unmarked graves at former residential schools on First Nations lands. About 70% of the government schools were run by Catholic religious orders, which worked to assimilate the First Nations students. A Truth and Reconciliation Commission said more than 4,000 students died while attending the residential schools, and many of the families never heard what happened to them.

First Nations leaders have condemned the fires. Chief Clarence Louie of the Osoyoos Indian Band, who is also tribal chair and spokesman for the Okanagan Nation Alliance, told Global News June 27 he has no doubt the fires were intentionally set.

“Obviously, it’s the same group of people. Why did they do it under the cover of darkness? Because it’s a criminal act and they are criminal,” he said.

On June 21, the Penticton Indian Band condemned the burning of two churches on First Nations Land in the South Okanagan area, saying they and the Osoyoos Indian Band “are in disbelief and anger over these occurrences, as these places of worship provided service to members who sought comfort and solace in the church.”

Perry Bellegarde, Assembly of First Nations national chief, said June 30 the Indigenous way is not to burn things down, but, rather, is about building relationships and coming together.

Some politicians are also starting to speak out. On Twitter, Alberta Premier Jason Kenney said the burning of the Morinville church “appears to be another violent hate crime targeting the Catholic community.” He said the century-old church “was the heart of Morinville and a key part of the history and spiritual life of Alberta’s Francophone community.”

Prime Minister Justin Trudeau mentioned the church fires, saying: “This is not the way to go. The destruction of places of worship is unacceptable. And it must stop.”

In Nova Scotia, police are describing a fire as “suspicious” after it damaged St. Kateri Tekakwitha Church on the Sipekne’katik First Nation grounds northwest of Halifax.

The spate of fires began June 21 when fires reduced to rubble two historic Catholic churches on First Nations lands in the Okanagan area.

Lower Similkameen Indian Band Chief Keith Crow told CBC that many in the community were members at the church and were very upset.

“I’m angry,” he told CBC. “I don’t see any positive coming from this and it’s going to be tough.”

NEXT: Through faith and science, people come closer to truth, pope says