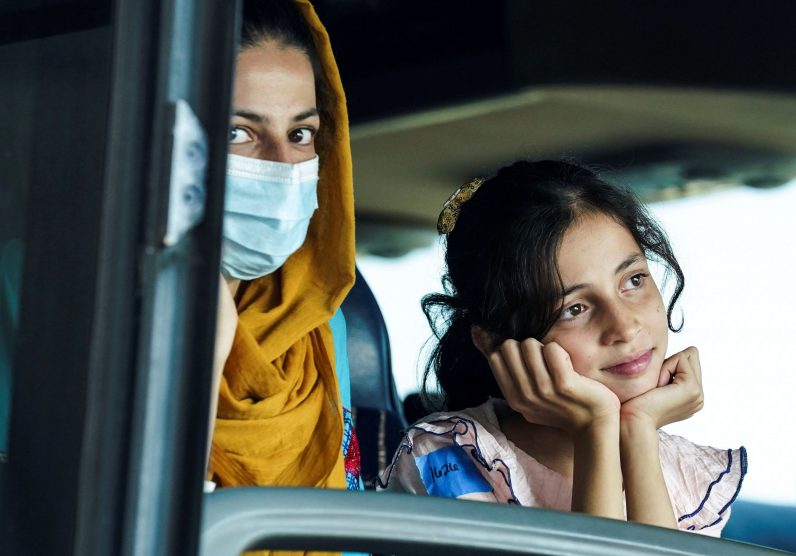 Afghan refugees ride aboard a bus taking them to a refugee processing center upon their arrival at Dulles International Airport in Dulles, Va., Aug. 25, 2021. (CNS photo/Kevin Lamarque, Reuters)

WASHINGTON (CNS) — An already tense situation in Afghanistan took a turn for the worse early Aug. 26 when an explosion near the Kabul airport led to casualties and injuries still being calculated.

According to the Pentagon, at least 13 U.S. service members and at least 95 Afghans were killed; about a dozen others were injured.

Gen. Kenneth F. McKenzie, head of U.S. Central Command, said in an Aug. 26 video news conference, “While we’re saddened by the loss of life, both U.S. and Afghan, we’re continuing to execute the mission.” He added that an extremist Islamic State group was behind the attack involving a suicide bomber.

Afghans, U.S. citizens and others eager to leave the country had been flocking to Kabul’s international airport after a Taliban takeover in the capital in mid-August when the Afghan military collapsed following withdrawal of U.S. troops and contractors.

On the other side of the world, the Catholic Church, particularly in the U.S., has been “involved in the reception and establishment” of those seeking safe haven, participating in the effort with other faith-based aid groups and organizations such as the International Rescue Committee, said Bill Canny, executive director of Migration and Refugee Services for the U.S. Conference of Catholic Bishops.

While some of those fleeing are U.S. citizens, many are refugees who don’t have family members in the country nor have been in the U.S. before and left their lives behind at a moment’s notice with little beyond what they could carry.

“These are people who have been persecuted in their countries and they need new homes, their kids need to get into schools, they need to find work,” said Canny in a Aug. 25 telephone interview with Catholic News Service, speaking about the dire situation unfolding by the minute in Afghanistan. 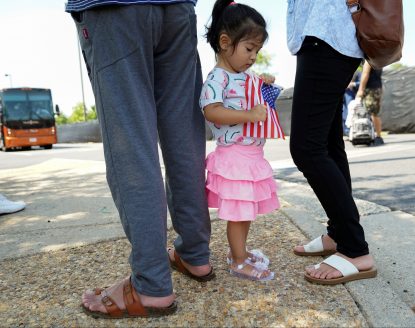 A girl holding a U.S. flag waits with her parents for Afghan relatives at a processing center for refugees evacuated from Afghanistan at the Dulles Expo Center near Dulles International Airport in Chantilly, Virginia, Aug. 24, 2021. (CNS photo/Kevin Lamarque, Reuters)

Faith-based groups, including Catholic organizations, also have been calling on the Biden administration to speed up the evacuations.

“Our government owes a debt of service to the Afghan people, not to mention the moral responsibility it has to help the women and children of Afghanistan who are now in imminent danger. The National Advocacy Center of the Sisters of the Good Shepherd calls on President Biden to immediately not just to welcome but to fervently work to get out those in danger,” said Fran Eskin-Royer, the organization’s executive director, in an Aug. 26 statement.

Anna Gallagher, executive director for Catholic Legal Immigration Network Inc., said Aug. 24 on Twitter that Afghans had “risked their lives for us, and we must now make every effort to protect theirs.”

The George W. Bush administration sent troops to Afghanistan after the Sept. 11, 2001, attacks in New York and Washington, trying to pin down al-Qaida militants who planned the attack, including Osama bin Laden, who was believed to be in and out of Afghanistan hiding with help from the Taliban.

U.S. troops remained there under previous administrations from both political parties and in October 2020, President Donald Trump tweeted that he would withdraw U.S. troops from Afghanistan by Christmas. Biden continued with the plan but with a different timeline. However, analysts have blamed all previous administrations– from George W. Bush to Biden — with the unfolding drama.

Some Catholics say what is important is to help those affected by it.

“All politics must remain out of this decision. These are our brothers and sisters, and we must receive them with great dignity and respect,” Gallagher said.

President Joe Biden said Aug. 22 that the military had evacuated 28,000 people since Aug. 14 from the Kabul airport and seemed set on an Aug. 31 full withdrawal of troops in what analysts said was to prevent precisely the kind of attack that took place Aug. 26.

McKenzie said at least 1,000 Americans were still in Afghanistan and the U.S. would do everything possible to get them out, “but not everybody wants to leave,” he said.

For its part, the church has been helping Afghans as best as it can, given that certain systems to move refugees along, in the U.S., are “still slow and recovering from the previous administration,” said Canny.

“Over the last month, we’ve begun to rebuild the system in preparation of more arrivals … since those arrivals haven’t been able to get started, it’s a good moment to welcome those families being resettled,” Canny said.

The U.S. has been using domestic military bases to process and house Afghan refugees, including at El Paso’s Fort Bliss in Texas, Camp McCoy in Wisconsin, Fort Lee in Virginia, Joint Base McGuire-Dix-Lakehurst in New Jersey.

The challenge is that facilities at those military installations have only been put up recently, Canny said.

“We have staff in each one with exception of Fort Lee. … We want to make sure we do a review of their legal status. They would only be in the installation for a week and are given assistance with mental health and wellness, if they need it, make sure they’re OK, make sure the kids are OK,” said Canny.

Local news reports out of New Mexico also said Holloman Air Force Base was waiting for indications it would be a place to welcome refugees.

Parishes and Catholic laypeople around the country who want to help can do so in a variety of ways, said Canny.

“The best thing for parishes to do is get in in touch with local Catholic Charities who are involved in the national effort,” Canny said. “Call their dioceses and find out what’s going on (locally). Also, look at what other churches are doing in an ecumenical (effort) to provide refugees, people who are here out of fear for their lives, the best welcome, because they aided our government.”

People can also donate to Catholic Charities as well as to organizations listed in the MRS resources page at www.justiceforimmigrants.org/afghanistan. There also may be opportunities for people to open up their homes to refugees in the short-term as they move into some cities where the housing markets are expensive, Canny said.

“We’re grateful for the opportunity to help,” Canny said. “We don’t consider ‘we’re saving these people,’ who are in effect saving us by giving us the opportunity to help. … This is what our church does and it’s founded on the Gospel and it includes the life of Jesus and Mary and Joseph as they fled for safety.” 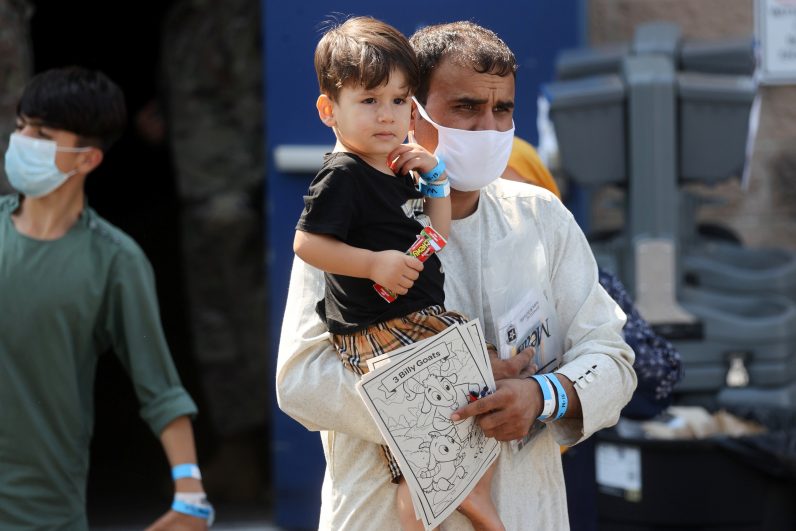 NEXT: Aid group fears for 400 employees in Afghanistan