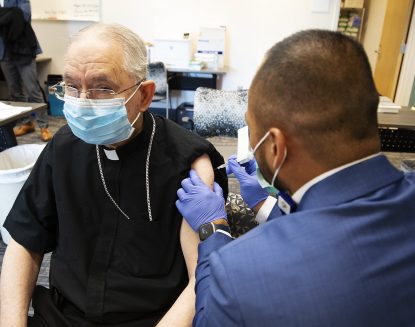 The rise in coronavirus vaccine mandates around the country, including at Catholic diocesan offices, hospitals and universities, has prompted a parallel increase in interest in a vaccine exemption template letter developed by the National Catholic Bioethics Center.

Father Tadeusz Pacholczyk, the center’s director of education, confirmed in an email to Catholic News Service Aug. 24 that the bioethics think tank has seen a jump in interest in the letter as people look to explain to employers their choice, rooted in conscience, not to receive any of the vaccines developed in response to the coronavirus pandemic.

Questions surrounding the three vaccines administered in the U.S. — Pfizer-BioNTech, Moderna and Johnson & Johnson — from some within the church revolve around whether already widely used cell lines developed decades ago from tissue of aborted fetuses are used in manufacturing or testing processes.

The NCBC has had the template letter on its website, www.ncbcenter.org, since July 2, when it posted a statement explaining that it “does not endorse mandated COVID-19 immunization with any of the three vaccines” that have received emergency use authorization from the U.S. Food and Drug Administration. (The Pfizer vaccine has now received final FDA approval, as of Aug. 23.)

The bioethics center cited guidance from the Vatican’s Congregation for the Doctrine of the Faith, which in December explained that individuals must decide to be vaccinated or not based on personal conscience and discernment.

The Vatican’s doctrinal office said at the time that when alternative vaccines are not available, it is morally acceptable to receive COVID-19 vaccines developed or tested using cell lines originating 50 years ago from aborted fetuses.

“It must therefore be considered that in such a case all vaccinations recognized as clinically safe and effective can be used in good conscience with the certain knowledge that the use of such vaccines does not constitute formal cooperation with the abortion from which the cells used in production of the vaccines derive,” the statement said.

However, the congregation added, “the licit use of such vaccines does not and should not in any way imply that there is a moral endorsement of the use of cell lines proceeding from aborted fetuses.”

The doctrinal office also said those who refuse for reasons of conscience “must do their utmost to avoid, by other prophylactic means and appropriate behavior, becoming vehicles for the transmission of the infectious agent” to those who are the most vulnerable.

Father Pacholczyk wrote in an email to CNS that the NCBC’s July 2 stance remains unchanged even though vaccine mandates are being implemented in at least two dioceses and several bishops have directed priests not to sign letters from parishioners seeking an exemption from vaccination.

He said the template does not require a priest’s signature to “‘certify’ or ‘authenticate'” its contents. “Priests, in fact, cannot ‘certify the state of another’s conscience,’ and really do not need to be asked to do so,” he explained.

Since the NCBC posted its statement, dioceses have come down on both sides of the religious exemption question.

The Catholic bishops of Colorado, South Dakota and Wisconsin have issued statements supporting the conscience rights of individuals to seek a religious exemption from being vaccinated.

The Colorado Catholic Conference followed the NCBC’s lead and has included a template letter for vaccine exemption on its website that can be downloaded.

The state’s four bishops affirmed in early August that “the use of some COVID-19 vaccines is morally acceptable under certain circumstances,” but also said they objected to mandating that Coloradans get vaccinated against the coronavirus.

In South Dakota, Bishop Donald E. DeGrood of Sioux Falls and Bishop Peter M. Muhich of Rapid City, said in an Aug. 10 statement that people have a right to follow their conscience regarding the vaccines. “We must not be forced to act contrary to our conscience, i.e., to be compelled to do something we believe to be wrong,” they said.

The five bishops of Wisconsin echoed that stance Aug. 20, but also said, “Pastors should not feel compelled to issue documentation recognizing this conscientious objection (to mandatory vaccination) and are not recommended to do so.”

Meanwhile, Bishop Mark J. Seitz of El Paso, Texas, and Bishop John E. Stowe of Lexington, Kentucky, in mid-August required diocesan employees to be vaccinated. In El Paso, the mandate extends to catechists, extraordinary ministers of the Eucharist and others in ministry.

Bishop Seitz said the diocesan requirement stems from what he believes is the church’s “responsibility to keep others safe.”

“Those who work and perform ministries in a special way represent the church. We need to lead by example,” he said, explained that Catholic Christians are responsible for acting “on behalf of the common good and not just for ourselves as individuals.”

Bishop Stowe described the challenges posed by the growing number of reported COVID-19 cases that are leading to more hospitalizations as “an urgent matter of public health and safety.”

“There is no religious exemption for Catholics to being vaccinated, and Pope Francis has repeatedly called this a moral obligation,” he said in a statement posted Aug. 17 on the diocesan website.

“The health care system is now overwhelmed by a crisis caused primarily by those who refuse to protect themselves and others by getting vaccinated. This is unacceptable, and our diocese now joins those employers who have already made this basic commitment to the common good a requirement,” he added.

Bishop Stowe told CNS Aug. 25 that the requirement is in place for school employees and will extend to workers at the chancery Sept. 1. “Pastors were informed that if they required a vaccination for other employees, they would have my support but the vaccine requirement for employees is not universal,” he said.

Pope Francis has joined other church leaders in urging Catholics to be vaccinated.

“Being vaccinated with vaccines authorized by the competent authorities is an act of love,” the pope said in a three-minute public service announcement in Spanish with English, Spanish and Portuguese subtitles released Aug. 18.

The video message was part of a global effort by the U.S.-based nonpartisan, nonprofit Ad Council and the COVID Collaborative’s “It’s Up To You” campaign to increase people’s confidence in the vaccines by reminding them that such a medical intervention is safe, effective and saves people’s lives.

Father Pacholczyk explained that he believes Pope Francis’ involvement in the ad campaign “represents a decision to share a personal judgment, his best assessment of the situation surrounding the pandemic.”

“His judgment is a prudential judgment, a judgment based on the virtue of prudence, where he strives to understand the risks and benefits to the best of his ability, reading all the particulars of a situation, and deriving his best personal conclusion,” Father Pacholczyk wrote in his email to CNS.

“Even though the pope counsels and encourages the reception of vaccines generally, and using broad language, the pope himself would not actually encourage such reception universally. … His passing comments during an interview or his thoughts shared in a public service announcement can scarcely be invoked as imposing a universal moral obligation to be vaccinated,” the ethicist continued.

Throughout the United States, bishops and diocesan officials have urged priests to avoid giving religious exemptions to COVID-19 vaccines to parishioners.

Cardinal Blase J. Cupich of Chicago in an Aug. 17 letter advised priests to “politely decline and explain” that signing such a letter “would mean that you would be endorsing something that is not in keeping with Catholic teaching.”

“Parishioners surely can determine their own actions, but it would be important to clarify that they cannot use the teaching of the church to justify such decisions, which in their essences, are a rejection of the church’s authentic moral teaching regarding COVID vaccines,” the cardinal’s letter said.

In the Archdiocese of St. Paul and Minneapolis, Archbishop Bernard A. Hebda Aug. 20 acknowledged that while the church supports a person’s right to seek a vaccine exemption based on conscience, such a decision “should not be dependent upon an attestation from a member of the clergy.”

NEXT: As Afghanistan convulses, Catholic groups help refugees in U.S.