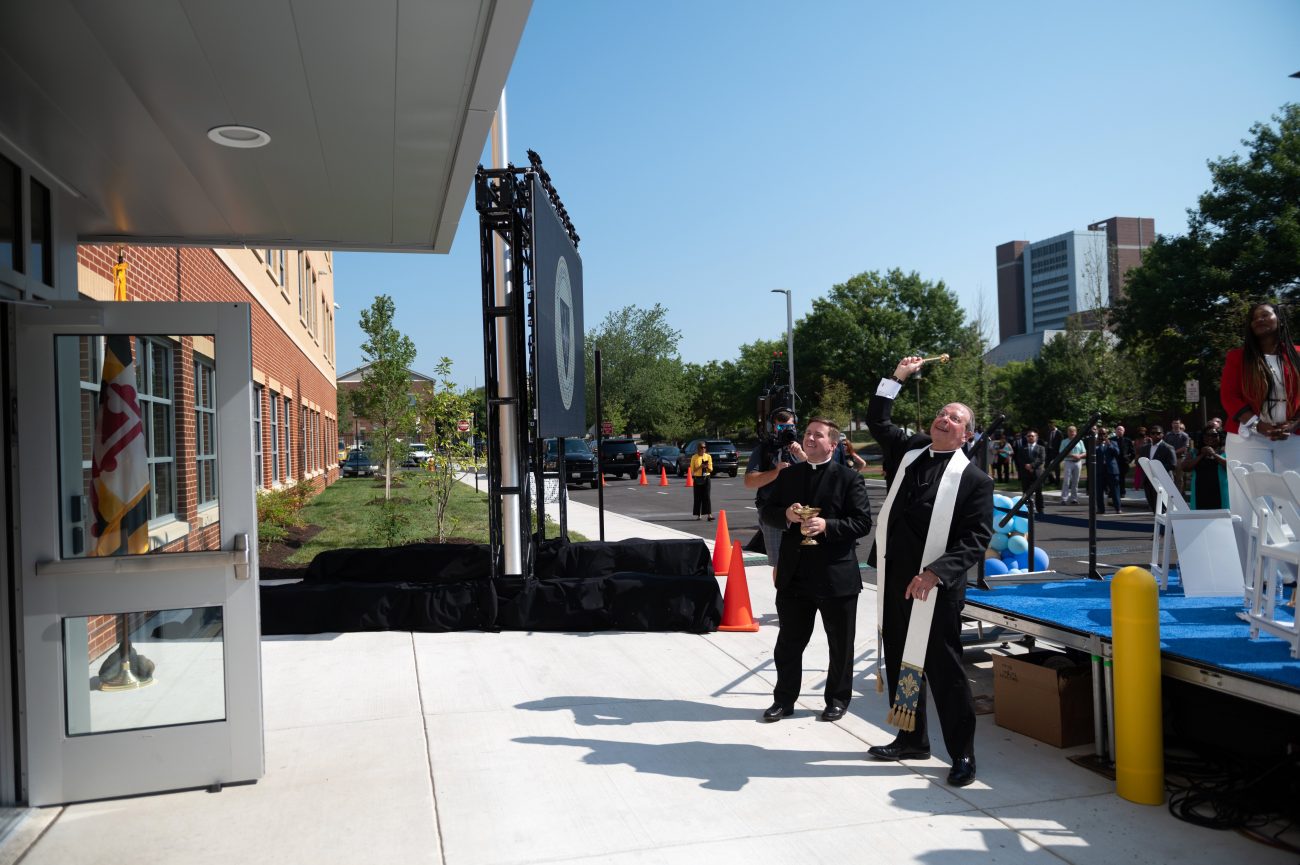 BALTIMORE (CNS) — As more than 100 people gathered outside the front doors of Mother Mary Lange Catholic School Aug. 6, some cars and buses on Martin Luther King Jr. Boulevard honked their horns in acknowledgment of the accomplishment.

The blessing and ribbon-cutting ceremony for the first new Catholic school in the city in 60 years featured remarks from Baltimore Archbishop William E. Lori; James Sellinger, chancellor of education for the Baltimore archdiocesan Catholic schools; and Donna Hargens, superintendent of Catholic schools.

Others who spoke included a student from what will be the first graduating class of the school; and Baltimore Mayor Brandon Scott and other civic dignitaries.

In an opening prayer, Sister Rita Michelle Proctor, major superior of the Oblate Sisters of Providence, said the members of her order were proud and happy to be part of the dedication of a school named for their foundress, whose commitment to educating Black children in Baltimore began more than 192 years ago.

She prayed that the students’ spiritual, intellectual and emotional well-being would be strengthened by what they learn and experience.

“Loving God, let this be a place where the laughter of children is heard, and everyone will be treated with loving respect,” Sister Rita Michelle said. “May these holy grounds be a place of peace, offering refuge from chaos and doubt. May all students who enter this shelter experience the freedom, calm and safety necessary to learn, play and explore.”

She quoted Mother Lange, who said of her own students: “May these students do all they can in your honor and glory and may they enter to learn and leave to serve.” 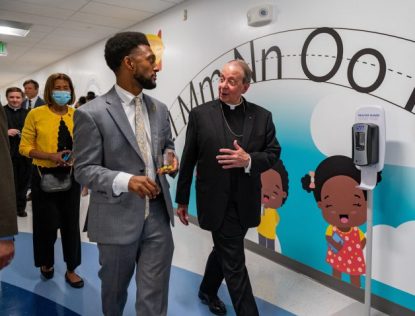 Sellinger greeted the crowd asking, “Is there anything more beautiful and hopeful than a new Catholic school?”

He noted that a similar group gathered 22 months earlier on the same campus to break ground for the project, which he said would become a “new beacon of hope and light for Baltimore city.”

He said in the spirit of Mother Lange, the archdiocese envisioned a school where “all children — regardless of creed, skin color and socioeconomic status — could have the same opportunity to learn, to hope, to dream and to achieve.”

One of the solutions to problems in the city has always been good schools, he said. “Education changes lives. Investing in education of children is investing in our community.”

The 65,000-square-foot facility will welcome over 400 students when classes begin Aug. 30. The school has a capacity of more than 500 but is phasing in some grade levels the first few years. Students from pre-K3 to eighth grade will have access to a turf field, gymnasium, cafeteria, art and science rooms, a library and a chapel.

Several speakers mentioned how construction on the project persevered through the pandemic, so that the opening of the school in fall 2021 would not be delayed.

Before the ceremonies, Hargens called the day “pure joy” and said it marked a commitment to education and to the city by providing access to education for students.

Part of the fundraising for the new school included the establishment of an endowment to provide tuition assistance. She said support also comes from Partners in Excellence, a group that has been working since 1996 to improve educational options for children in low- and very-low-income families in Baltimore City to attend Catholic schools.

During the ceremonies, Hargens introduced the new school’s first principal, Alisha Jordan, who began working more than a year ago — meeting with families and community members and recruiting teachers and staff.

Jordan said when she started the job last August, the building was just a shell and it was hard to visualize what it would be when complete.

“But now, just look,” she said, waving her hand toward the front of the building that features a large cross, which will be illuminated from within at night. “It’s our school. It’s beautiful and I cannot wait for all my students to fill the building on Aug. 30.”

Incoming eighth grader Jaylah Golder, who will be part of the new school’s first graduating class, spoke after Jordan. In her remarks, which drew a standing ovation from the crowd, she called the new school “amazing” and said she looks forward to using the robotics lab, gym and other resources the school offers.

She looks forward to growing in her Catholic education, she said. “I intend to follow in the footsteps of Mother Lange by leading others to do good and try my best to stand up for those who are not big enough to stand up for themselves.”

State and local civic leaders praised the new school as well, emphasizing the archdiocese’s $24 million investment in the west side of the city. The school stands on the site of the former Lexington Terrace housing project, opened in the late 1950s and demolished in 1996.

Scott, elected mayor in 2020, recalled that as a teen he worked for his family’s heating and air conditioning business installing systems at Lexington Terrace. “This is what a true mark of what transformation through the power of the Lord looks like,” he said in his remarks.

Several speakers, including Archbishop Lori, acknowledged how the archdiocese worked with city and state leaders and community partners to make the school possible.

The archbishop acknowledged the state’s BOOST program — Broadening Options and Opportunities for Students Today — program that provides scholarships for low-income families to find the best educational opportunity, including nonpublic schools. He also cited the New Market Tax Credit, a federal tax credit that provides an incentive for businesses to invest in low-income communities.

In his remarks, Maryland Gov. Larry Hogan called the opening of the school “an incredible achievement.” He thanked Archbishop Lori for his “steadfast leadership throughout the COVID-19 pandemic, working with us to keep people safe and reassure the community.”

The governor announced the state is directing an additional $39 million more in federal funding to provide additional relief for nonpublic schools to address some of the impacts of COVID-19.

Hogan, who is Catholic, noted that in the Gospel of Matthew, “Jesus tells his disciples that if they only had faith as small as a mustard seed nothing would be impossible. For so many children here in Baltimore City, the Mother Mary Lange Catholic School will be that mustard seed — that seemingly small, but powerful change that could make all the difference, and result in unlimited possibilities for their future.”

Before blessing the front doorways of the building and the lobby with holy water, Archbishop Lori referred to the cause for sainthood for Mother Mary Lange, who has the title “Servant of God,” whose image is emblazoned throughout the new school that bears her name. He noted that, in general, two confirmed miracles are needed for beatification and canonization. “What do you think?” he asked, gesturing to the facade of the school. “I think this new school qualifies as a miracle.”

“It’s beautiful outside; it’s even more beautiful inside. But what’s really going to make this school beautiful is when it’s full of students,” the archbishop said.

Gunty is associate publisher and editor of Catholic Review Media, the news operation of the Archdiocese of Baltimore. 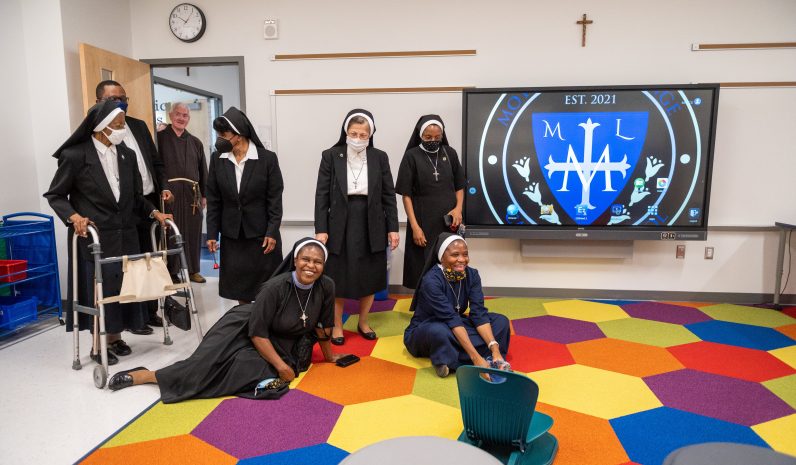 Oblate Sisters of Providence pay a visit to one of the preschool classrooms at the new Mother Mary Lange Catholic School in West Baltimore following dedication ceremonies Aug. 6, 2021. The school is named for the order’s founder. (CNS photo/Kevin J. Parks, Catholic Review)