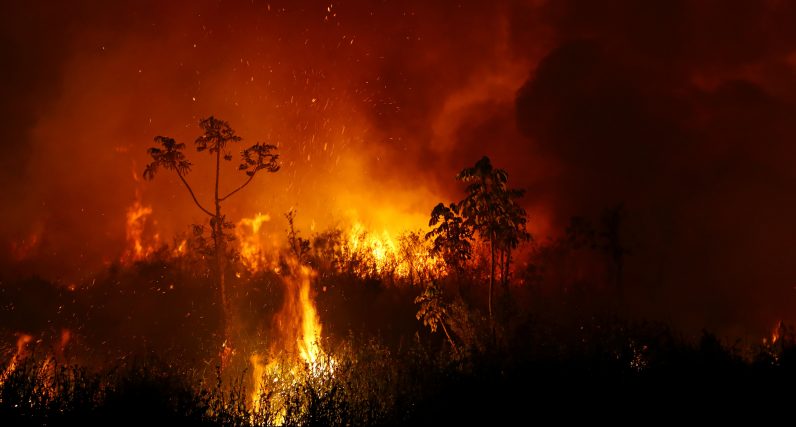 Smoke from a fire in Pocone, Brazil, rises into the air Sept. 3, 2020, as trees burn among vegetation in the Pantanal, the world’s largest wetland. (CNS photo/Amanda Perobelli, Reuters)

Amadou Diallo, a program manager for Catholic Relief Services in his native Senegal, knows from talking with the farmers and cattle herders that the cyclical droughts the country experienced occurred about once every 10 years for generations.

More recently, he has learned from conversations with them that the droughts occur more often, perhaps every three or four years, and are unpredictable in duration.

The more frequent droughts cause the herders to take their cattle elsewhere, possibly opening the way to conflict. For people who grow crops to sell, their yields are smaller, limiting their ability to provide enough food for their families. At times, parents pull their children from school and send them to work to help support their families.

It’s all a sign of climate change, Diallo said.

Such changes in traditional practices of the Senegalese people, 80% of whom depend on agriculture as their source of income, are an example of the impact of a changing climate in communities around the world, according to the latest climate assessment report from the U.N.’s Intergovernmental Panel on Climate Change, or IPCC.

Severe flood, long-term drought, wildfires and extremes of heat and cold are all resulting from climate change, the report said.

Released Aug. 9, the massive document, covering 3,900-plus pages, serves as a “reality check” on how the planet is being reshaped by rising global temperatures, said Valerie Masson-Delmotte, co-chair of one of several working groups that compiled it.

The report was written by 234 climate scientists and draws its conclusions based on over 14,000 studies since the last assessment report in 2013.

It says that temperatures have risen by 1.1 degrees Celsius (2 degrees Fahrenheit) since the 19th century, reaching their highest level in more than 100,000 years. The report concludes that human activities, through the burning of fossil fuels, like wood, oil, coal and natural gas, accounts for almost all of the temperature rise. Burning those fuels releases heat-trapping greenhouse gases, such as carbon dioxide and methane.

The warming atmosphere is affecting virtually every corner of the planet, the report said. Rising temperatures are leading to the melting of glaciers, ice packs and sea ice, contributing to rising sea levels that threaten coastal communities; increased extreme weather events such as stronger hurricanes, torrential rains — like those that have recently caused widespread flooding in Europe and China — and droughts that can lead to wildfires and the loss of tillable farmland.

The report also outlines a series of paths that describe increasingly greater warming and projected progressively dire outcomes across the planet by the mid-21st century. It also said that it’s not too late to slow those changes and avoid the worst environmental catastrophes.

Catholic leaders in the environmental protection movement said the church can cement a leading role in addressing climate change based on the report’s conclusions.

Dan Misleh, executive director of the Catholic Climate Covenant, told CNS that the science behind the report makes clear it is time for people to reduce the consumption of fossil fuels in an effort to slow climate change.

“These reports come out regularly and each time the scientists are saying this is a problem and we need to address it,” he said. “The difference now is more and more people are experiencing the impact of climate change. Perhaps this time the message will fall on a few more ears than it has in previous IPCC reports.”

Misleh turned to a Gospel story to stress his concern. Citing the Matthew’s Gospel in which Jesus asks the disciples “What parent among you would had your child a stone when your child asks for bread?”

“Young people are asking of us older people to give them bread and nourishment and we keep handing them stones. We don’t do what we need to do, to pass the gift of God’s creation to them as we’ve done before,” Misleh said.

Key to the church’s response will be the Laudato Si’ Action Platform, introduced in May by Pope Francis. It is designed to carry out a global grassroots movement to create a more inclusive, fraternal, peaceful and sustainable world based on the pope’s 2015 encyclical on the environment.

One such effort she identified emerged in Dayton, where a group of University of Dayton graduates developed Mission of Mary, a community-supported agriculture program to provide food in a “food desert” in one of the city’s neighborhoods. “Graduates started living in the neighborhood, forming relationships. They took an abandoned swimming pool lot and are helping neighbors grow a garden,” she said.

Such efforts also can help address environmental injustices that find people of color and low-income communities adversely affected by polluting practices with no plan for corrective action, said Sister Jablonski who also is a scholar for faith and environment at the university’s Hanley Sustainability Institute.

The report also points to the need for Catholics to “understand the stakes and the realities” warming temperatures pose to all life on earth, said Michael Schuck, co-director of the International Jesuit Ecology Project at Loyola University Chicago.

He also encouraged people who are passionate about protecting God’s creation to talk about it with others and that the report which made headlines can be a starting point for small steps that can lead to significant action.

And it’s also time to allow the younger generation to lead, Schuck added.

“We elders, we have to keep listening and empathizing with the next generation.” 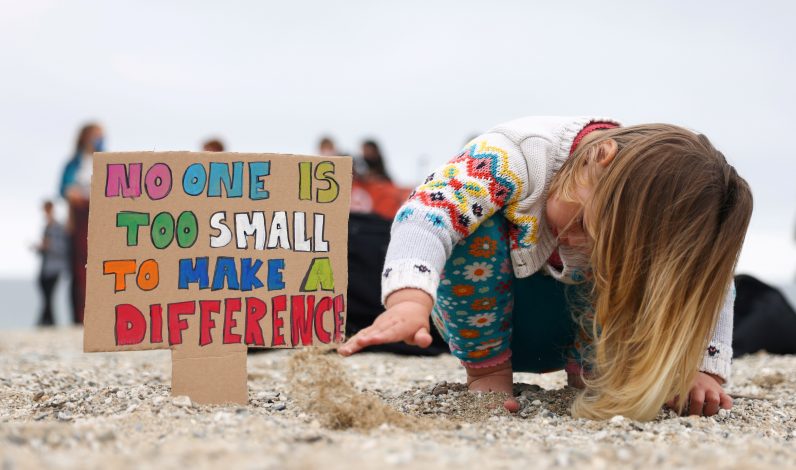