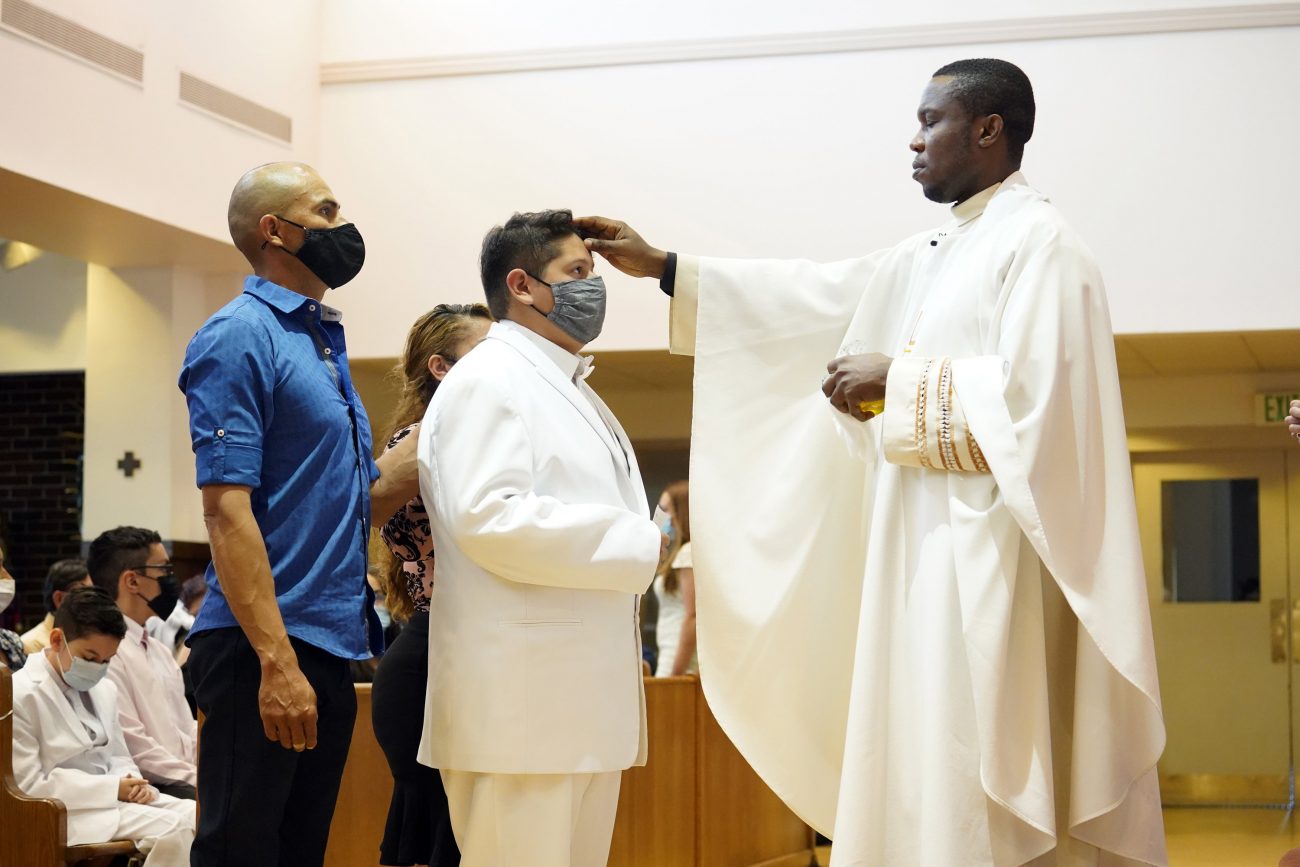 Melecio Ventura, 16, is confirmed by Father Patrick Ojiakor Aug. 14, 2021, at St. John of God Church in Central Islip, N.Y. Nine young people, ages 9 through 17, received the sacraments of initiation -- baptism, confirmation and first Communion -- during a special Mass celebrated for them. They had been expected to receive the sacraments earlier in the year but issues related to the coronavirus pandemic interrupted the preparation process. (CNS photo/Gregory A. Shemitz)

Face masks are back in vogue at Mass.

The rising nationwide spread of the delta variant of the coronavirus is leading church leaders to strongly encourage — or even require — Massgoers to use facial coverings while attending indoor Masses.

Other steps such as social distancing of at least three feet, more frequent sanitizing of surfaces and limits on the size of choirs also have been reinstated in several dioceses.

The extent of the precautions meant to restrict spread of the more virulent strain of the virus that causes COVID-19 varies from diocese to diocese and often depends on local or state public health requirements.

Despite the return of masks, parishes have seen Mass attendance remain steady or even gradually rise since the dispensation of the obligation to attend Sunday Mass has been rescinded in most dioceses.

Joseph Zwilling, spokesman for the Archdiocese of New York, told Catholic News Service that a mask mandate has not been reinstated, but that pastors have been reminded that other protocols instituted at the start of pandemic remain: having a separate area for worshippers who want to remain socially distant; frequent sanitation; no consecrated wine from the chalice at Communion; a simple acknowledgment, not a handshake, at the sign of peace and no holy water in fonts.

“Anecdotally we continue to hear that Mass attendance is rising each week at our parishes; that is certainly the case at (St. Patrick’s) Cathedral,” Zwilling wrote in an email.

When it comes to masking, many dioceses are encouraging the use of face coverings in line with guidance from the Centers for Disease Control and Prevention. The federal agency in July updated its guidance as rising numbers of COVID-19 cases were reported, recommending that masks be worn indoors by all people, including the fully vaccinated, in areas of high transmission.

During the week of Aug. 11-17, virtually every corner of the country was classified as having high transmission rates. Low transmission rates were limited to parts of Nebraska and isolated counties in Midwestern, Rocky Mountain and Great Basin states.

The Diocese of Harrisburg, Pennsylvania, announced Aug. 12 that masking requirements were being restored for clergy and laypeople for the distribution of holy Communion. Ushers and greeters, when exercising their service, also are covered by the decision.

Parishioners are exempt from the mandate, however. Still, the diocese “strongly encouraged” parishioners “to make a responsible decision about the use of masks and vaccination.”

“All persons — whether vaccinated or unvaccinated — should consider wearing masks when in close proximity to others,” the Diocese of Cleveland said in an announcement Aug. 10. “Frequent hand-washing and practicing social distancing also are strongly encouraged. Health professionals say that these steps, along with regular disinfection of frequently touched surfaces will prevent the spread of the disease.”

In the Diocese of Burlington, Vermont, masks are not required, but officials are tracking the spread of the coronavirus closely even as Mass attendance has gradually increased since Easter, Josh Perry, director of the diocesan Office of Worship, told Vermont Catholic magazine.

Bishop Joseph R. Kopacz of Jackson, Mississippi, encouraged Catholics to wear masks at Mass and other indoor church events in a July 23 video. He also said he was keeping the dispensation from the Sunday Mass obligation in place, suggesting that people participate in another Mass during the week when fewer people are present.

“Again we encourage everyone to be vigilant and to beware that we are still in the midst of the pandemic in a very, very infectious time,” Bishop Kopacz said. He also urged unvaccinated people to get the necessary shots “as a way of protecting yourself and others.”

Similar encouragements on mask-wearing at Masses and other large church gatherings have been made by the dioceses of Portland, Maine, and Sioux City, Iowa, and the Archdiocese of Detroit.

In contrast, mask mandates have been reestablished elsewhere, including by the Archdiocese of Portland, Oregon.

In a statement Aug. 13, the archdiocese said its COVID-19 Response Team had consulted with “faithful Catholic medical experts who have confirmed the contagious nature of the delta variant and the dire situation of our hospital systems in Oregon.”

“In charity, we must do our part to help stop the spread of this dangerous variant,” the archdiocese said, adding that “restrictions and vaccinations are not 100% effective against the virus, but we have a pastoral responsibility to attempt to mitigate the risks for parishioners and school families.”

In the Archdiocese of San Francisco, Archbishop Salvatore J. Cordileone has not lifted a mask mandate even as other safety protocols have eased since he ended dispensation from the Sunday Mass obligation in June.

Bishop John E. Stowe of Lexington, Kentucky, restored a mask requirement for Masses and liturgies July 30. He also called for singing to be “greatly reduced or eliminated.”

“The mask mandate for Masses had already been resumed and it has not had any noticeable impact on Mass attendance,” he told CNS Aug. 19. “Some parishes have designated areas of the church for social distancing and they are being used. There was some, but not a lot, of grumbling about the return to mask-wearing.”

The Archdiocese of Los Angeles July 16 began requiring worshippers to wear masks at Mass in Los Angeles and Santa Barbara counties after public health officials reinstated mandates. The archdiocese’s requirement does not apply to Ventura County parishes where no public health mandate is in place.

Parishes in the cities of Washington and Chicago also began requiring Massgoers to wear masks in late July as local health officials reinstated mandatory mask-wearing for all indoors events and at workplaces.

One place where the dispensation from in-person Mass attendance remains in place is in the Diocese of Dallas. Bishop Edward J. Burns had planned to end the Mass dispensation starting Aug. 15. However, the diocese announced Aug. 10 that Bishop Burns decided to delay the plan because of the delta variant’s advance.

“This decision has not been made lightly as we all desire to get beyond the ongoing effects of the pandemic. We will continue to monitor this situation closely and as soon as we are safely able to do so, we will get back to normal,” Bishop Burns said in a statement.

Amid the resurgent pandemic and the debate over whether masking should be required or optional, some dioceses found it necessary to issue reminders asking people to refrain from arguing over masking and other safety protocols.

“Everyone is reminded to show kindness and respect to on another, especially those who may be taking an approach different from their own,” the Cleveland Diocese’s announcement said.

“Individuals and families,” it said, “must decide for themselves how best to respond to the current situation taking into consideration information from credible health authorities while following our Lord’s command, ‘As I have loved you, so you should love one another.'”