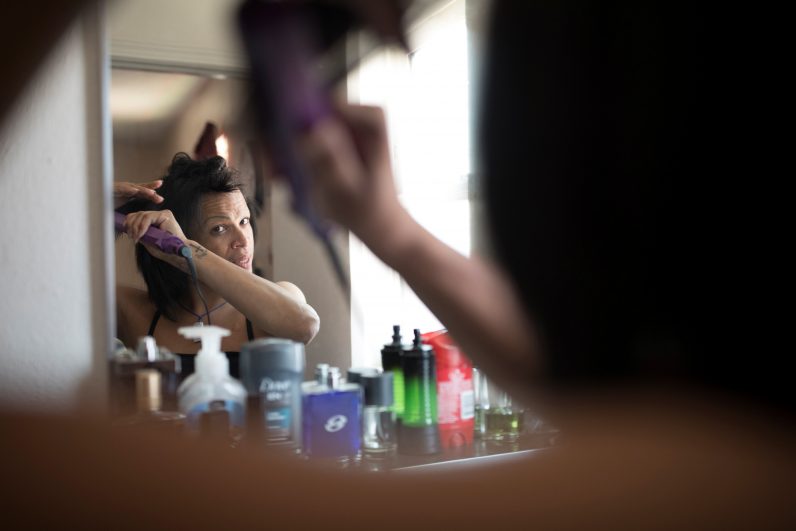 Shannel Cruz, who is transgender, gets ready for the day in Albuquerque, N.M., July 29, 2018. Bishop Michael F. Burbidge of Arlington, Va., published “A Catechesis on the Human Person and Gender Ideology” Aug. 12, 2021. “As a Catholic Church, we have a sacred duty and obligation — out of our love for our young people and God’s family — to speak the truth,” he said, about transgenderism, an ideology that says a person can change his or her gender. (CNS photo/Adria Malcolm, Reuters)

ARLINGTON, Va. (CNS) — The topic of transgenderism is discussed routinely in the news, on television shows and in schools.

This prevailing ideology — that a person can change his or her gender — is impacting Catholic families, too, said Bishop Michael F. Burbidge of Arlington.

So, following consultation with experts in theology, bioethics, clinical counseling, civil and canonical law, as well as with priests, Bishop Burbidge issued “A Catechesis on the Human Person and Gender Ideology” Aug. 12.

He also released policies relating to the human person and gender ideology to be followed in Catholic schools and faith formation and youth ministry programs.

“As a Catholic Church, we have a sacred duty and obligation — out of our love for our young people and God’s family — to speak the truth,” said Bishop Burbidge. “Not only to speak the truth but to explain why we believe what we do and to give Catholics the language they need to explain this to others.”

This resource was intended to assist all Catholics, but especially adults and parents of children who experience gender identity confusion.

Many reach out for help to priests such as Father Stephen Schultz, who in addition to serving as chaplain of St. Paul VI Catholic High School in Chantilly, Virginia, ministers to individuals in these situations.

“It’s really picked up among younger people,” said Father Schultz, one of the many people consulted in the drafting of the catechetical resource. “There’s been times this year that in a week, I’ve gotten two or three calls from parents of middle school-age children who are reporting sexual identity dysphoria.”

The topic of transgenderism is very much a part of the cultural conversation right now, said Father Schultz, “but it feels like a one-sided conversation. There are these movements that think we can totally define ourselves and that we are completely self-creating individuals.”

The Catholic Church teaches differently. “Our bodies are a gift and we need to receive them as a gift and understand ourselves — body and soul — in the light of God’s love,” he told the Arlington Catholic Herald, the diocesan newspaper.

The catechetical resource begins by explaining the Catholic understanding of the nature of human beings. “To be a human person means to be a unity of body and soul from the moment of conception,” the document said. As a result, our God-given bodies are “neither foreign nor a burden, but an integral part of the person.”

Part of that person is his or her gender. Men and women of different times, cultures and personalities may express their femininity and masculinity in a variety of ways, and some may have interests that are more associated with the opposite sex. But none of that changes their sex as male or female, the document said.

The differences between men and women are ordered toward their complementary union in marriage.

“Man and woman were made ‘for each other’ — not that God left them half-made and incomplete: He created them to be a communion of persons, in which each can be ‘helpmate’ to the other, for they are equal as persons,” said the document.

According to the American Psychiatric Association, gender dysphoria is a psychological condition in which a biological male or female comes to feel that his or her emotional and/or psychological identity does not match his or her biological sex and “experiences clinically significant distress” as a result.

“The experience of this interior conflict is not sinful in itself but must be understood as a disorder reflecting the broader disharmony caused by original sin,” the document said, and those who experience this issue should be treated with “respect, justice and charity.”

The prevailing secular culture encourages these individuals to choose a new name, go by opposite sex pronouns, and turn to chemical or surgical interventions that alter the body’s appearance and destroy otherwise healthy reproductive organs. The church says the way to assist those experiencing gender dysphoria is to help them come to a true understanding of their identity.

The rest of the catechetical resource advises Catholics on how they should speak the truth about transgenderism with love.

“The church has a special solicitude for those who are suffering and desires to lead them to the truth and to healing,” said the document. “Thus, when speaking with those who experience gender dysphoria or who claim a ‘transgender’ identity, it is essential to listen and seek to understand their experiences. They need to know they are loved and valued, and that the church hears their concerns and takes them seriously.

“At the same time, a person who deliberately rejects his or her given identity or the sexed body and seeks harmful medical or surgical interventions is pursuing a path that is objectively wrong and harmful on many levels.”

The document encourages people to not use pronouns or names that do not reflect the truth of a person’s sexuality. “Such use might seem innocuous and even appear to be an innocent way of signaling love and acceptance of a person. In reality, however, it presents a profound crisis: We can never say something contrary to what we know to be true,” said the document.

The resource also recommends that parents be on the lookout that their children are not exposed to this false ideology in school or online.

“This means the close monitoring of what your children receive via the internet and social media. Transgender ideology is being celebrated, promoted, and pushed out over all social media platforms and even children’s programming,” it said. “Much of your good work and witness can be undone quickly by a child’s unsupervised or unrestricted internet access.”

Bishop Burbidge knows many will be criticized and ostracized for their belief that men and women cannot change their sex, but he asks the faithful to speak out anyway.

“We cannot be silenced. The mandate to speak on this issue clearly and lovingly is greater than ever,” he said. “There’s no need to be afraid. It’s the truth, we’re speaking it in love, and God will give us the strength and courage and perseverance we need.”

Finally, the document addresses those who experience gender dysphoria with a word of encouragement.

“Please know that, although you may struggle with your body or self-image, God’s unrelenting love for you means that he loves you in the totality of your body as well,” it said. “Our basic obligation to respect and care for the body comes from the fact that your body is part of the person — you — whom God loves.

“Christ suffered for our sake, not to exempt us from all suffering but to be with us in the midst of those struggles. The church is here to assist and accompany you on this journey, so that you will know the beauty of the body and soul that God gave you.”