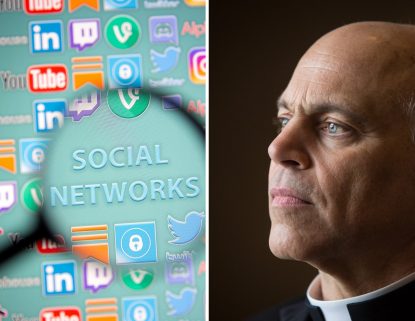 SAN FRANCISCO (CNS) — YouTube’s blocking of a theologian’s talk on the Christian view of sex as a “content violation” raises serious concerns that “religious speech is being censored online,” San Francisco’s archbishop and Focus on the Family’s president said in a Wall Street Journal op-ed they co-wrote.

“Today’s sexual politics function as a new kind of fundamentalism, one that presents a deep problem to a diverse and democratic society. … Social media enables the new fundamentalism, enforced by the mysterious rules of big tech’s quasi-monopoly,” wrote Archbishop Salvatore J. Cordileone and Jim Daly.

In their Aug. 12 op-ed, they explained that twice on Aug. 7 a live broadcast by the Rev. Carl Trueman, a scholar, best-selling author and Presbyterian minister, “was booted off the air.”

He was giving a series of talks at the Sacramento Gospel Conference that were livestreamed on the YouTube channel of the conference’s host, Immanuel Baptist Church in Sacramento, California.

“Viewers were informed that the first interruption was due to a copyright violation, possibly the result of Christian music that the conference organizers played during a break,” the archbishop and Daly wrote. “But in the second, more mysterious instance, Mr. Trueman’s presentation went dark because of a ‘content violation.'”

Neither Rev. Trueman nor Immanuel Baptist have been told if “a human being or an algorithm on automatic pilot” intervened in the broadcast, they said.

“Equally unclear is the specific nature of the alleged content violation,” they said. “Nothing in Mr. Trueman’s talks encouraged hatred, vulgarity or violence. On the contrary, he offered a thoughtful analysis of American cultural attitudes toward sex through the lens of classic Christian thought, citing sources from Freud to the philosophers Rousseau and Charles Taylor.”

In a recent essay in Deseret Magazine, Rev. Trueman wrote that “when traditional attitudes toward sexual behavior collide with modern notions of identity, religious conservatives may be labeled as anti-social or harmful to the sexual identity of others.”

“When the belief that bodies are fundamental to who we are, and therefore no one can be ‘born in the wrong body,’ crashes up against the notion of inner identities,” he wrote, “those who hold such views are considered bigoted.”

In their op-ed, Archbishop Cordileone and Daly said that after the YouTube incidents, Rev. Trueman “is understandably worried that religious speech is being censored online. So are many other religious believers.”

“And for good reason,” they continued. “We sense that the First Amendment guarantee of religious liberty is being dismantled, and with it the profound contributions that religion makes to American unity and self-government.”

An Aug. 17 opinion piece in the Deseret News by writer Cassandra Hedelius echoed the concerns raised by Archbishop Cordileone and Daly. “It’s chilling,” she wrote, “to think that internet media giants might be sidelining, or even censoring, traditional religious beliefs.”

“On public sidewalks, the First Amendment still theoretically protects free speech. In the new public square of the internet, power displaces liberty and conscience,” said the op-ed by the archbishop and Daly.

Adherents to the new fundamentalism of sexual politics “seek to impose their own rigid certitude,” rather than encourage “the dialogue of democratic process,” they said.

“On matters ranging from foster care and education to gender ideology and the family, this new fundamentalism is displacing the moral convictions that once grounded U.S. culture. The result isn’t a more compassionate and liberal society; it’s a more punitive one,” they added.

It used to be that religious liberty issues “could be resolved, or at least fruitfully argued,” by citing the words of the nation’s Founding Fathers, Archbishop Cordileone and Daly said. The Founders’ moral vision “was shaped by a mix of biblical faith and Enlightenment thought: reason and faith working together.”

“This vision was once widely shared but lately has less force,” they said.

This is because, they continued, “the language of ‘rights’ and social justice that marks so much of today’s social unrest may sound familiar — and much of it is a response to real injustice — but some of the key ideas that govern our current culture wars are found nowhere in the Constitution, or, for that matter, in reality.”

Many people today believe “intolerance in the service of a new and allegedly ‘liberating tolerance’ is not only acceptable, but praiseworthy,” they said. “Killing freedom in the name of freedom is the Orwellian proposition at work.”

Religious liberty “should be important to everyone,” they said. “It checks government’s tendency to overreach, and it helps form citizens in the virtues necessary for democracy to work.”

“As writers, we speak from two different branches of the Christian tradition,” they continued. “Yet as Christians we share an obligation to hear those who suffer, to work for justice and speak the truth with love. St. Paul’s Epistle to the Romans reminds us to respect and obey civil authority, and to be leaven for goodness and beauty in the world.”

“The American experiment was founded on, and has always thrived on, the freedom of religious believers to speak, teach, preach, practice, serve and work in peace — not only in private, but in the public square — for the truth about God and humanity that ennobles their lives and all lives,” Archbishop Cordileone and Daly said.

“The more we diminish that freedom, the more crippled we become as a people. The more we feed it, the deeper and more robust the roots of our nation and its freedoms grow,” they said. “Those are the two paths before us. Here’s the good news: We get to choose.”