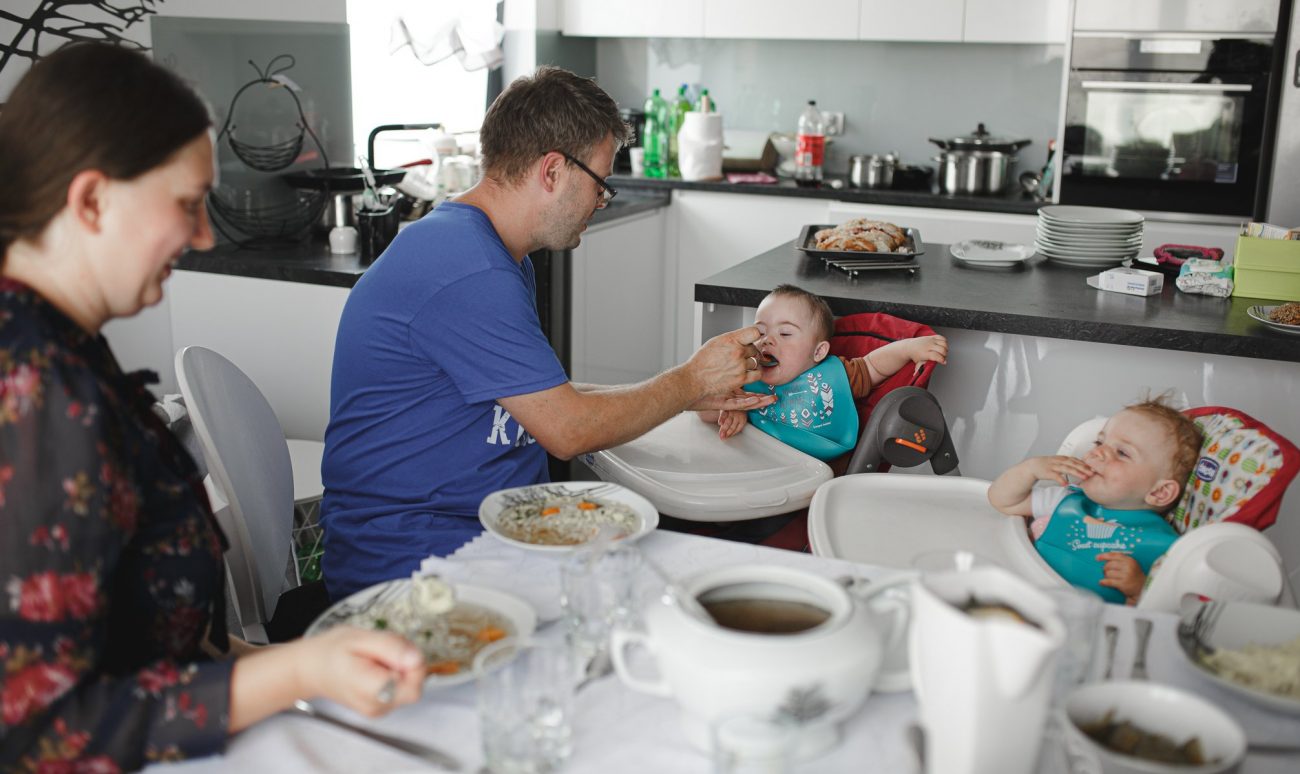 Michal and Angelika Steciak and their children, 19-month-old Peter, and 11-month-old Mary, are pictured during meal time at their home in Rembieszyce, Poland, July 11, 2021. The Steciak family was named the 2021 International Family of the Year by the Knights of Columbus during the fraternal order's virtual convention Aug. 3-4. (CNS photo/Maciej Maziarka, Knights of Columbus)

NEW HAVEN, Conn. (CNS) — The Knights of Columbus named the Steciak family of Rembieszyce, Poland, as the organization’s 2021 International Family of the Year.

The family as recognized for being “deeply involved in the life of the church” by leading “numerous social and volunteer initiatives,” including an outreach to the elderly and children with disabilities.

The honor came during the Knights’ 139th annual convention Aug. 3-4. It was held virtually, with key events being broadcast from the Supreme Council’s headquarters in New Haven and members from around the world participating online.

Five local Knights councils also were recognized for a range of efforts over the past year, including helping men become better fathers, building up council membership, helping foster families’ faith amid the pandemic lockdown and going the extra mile to support an annual March for Life affected by the pandemic.

The conference, which had as its theme “Called to Creative Courage,” opened with a Mass celebrated at St. Mary’s Church in New Haven.

The Mass included a message from Pope Francis sent to the Knights on his behalf by Cardinal Pietro Parolin, Vatican secretary of state. In it the pope expressed gratitude and well-wishes to the fraternal organization and noted the convention theme took up a challenge issued the Dec. 8, 2020, apostolic letter, “Patris Corde” (“With a father’s heart”), in which the pope declared a year of St. Joseph.

“St. Joseph’s example of ‘creative courage’ in the fullfilment of his vocation as father of the Holy Family,” the message said, “makes him a particularly good model for all those men who, in these times of uncertainty and unrest, seek to persevere in fidelity to our Lord and his Church, entrusting their lives and the lives of their families to his providential guidance and care.”

The pope’s message also noted how the convention theme reflected the life of the Knights’ founder, Blessed Michael J. McGivney, who was beatified Oct. 31, 2020.

“It was creative courage that characterized the life and ministry” of the priest, leading him to found the Knights in 1882, “with a small group of Catholic men … in response to the pressing spiritual and material needs of working men and their families,” it said.

“From seeds planted in a small but vibrant local parish, your order expanded throughout the world in subsequent years, enriching the lives of countless men and contributing in signal fashion to the development of the modern lay apostolate in service to the church’s universal mission,” the message added.

The pope urged members to be men of courageous witness, faith and integrity and “men committed to building up rather than tearing down, promoting healing and reconciliation in place of hatred and recrimination.”

“Inviting all to undertake the ‘journey of fraternity’ … can lead to a world ever more in accord with God’s saving plan for our human family,” he said.

In the message, Pope Francis also thanked the Knights for their “unfailing support of our Christian brothers and sisters experiencing persecution for the sake of the Gospel,” as well as their “manifold charitable activities” during the COVID-19 pandemic.

Pope Francis also sent prayerful good wishes to Patrick Kelly on his “new responsibilities as Supreme Knight, and to the members of the Supreme Council.”

Regarding the newly named International Family of the Year, Micha and Angelika Steciak and their two children, Peter and Mary, a news release from the Knights said the couple runs the Angels’ Village Foundation, which helps, among others, children with disabilities and the elderly.

They also are very active in parish life, and run a children’s choir and Bible study group.

The highlight of the couple’s life “is their marriage and family,” the release said. Married in 2011, they wanted children but learned they were unable to have their own. But their desire to become parents “came to fruition” in 2020 when they adopted Peter, an infant “who was rejected by his biological parents when they discovered he has Down syndrome.”

“The Steciak family was the 10th family in line to adopt this little boy, but the other nine candidate-couples gave up when they found out about the child’s health condition and refused to even see him,” the release said. “Today, 19-month-old Peter is being raised by a loving family, which recently also adopted a second child: 11-month-old Mary, now his little sister.”

The Knights councils honored during the convention were each recognized for a particular emphasis of their efforts:

— For faith, Monroe Council 1266, Monroe, Michigan: For creation of a group fostering brotherhood and an environment “where they take responsibility for learning, living, strengthening and sharing the faith by hosting a men’s prayer breakfast.

Thirty council members and 20 nonmembers call themselves the “Regular Joes” and “focus on becoming better men, leaders, husbands, fathers and followers of Christ.” This group started in 2019 with five men and has grown to 50; they continued to meet regularly — and remotely — during COVID-19. The prayer breakfasts have led 18 men to become Knights and also “have injected new life into the council.”

— For life, Divine Word Council 7331, Techny, Illinois: Council 7331 is one of the main organizers and route marshals for the annual March for Life in Chicago. In 2020, due to the pandemic, the march could not proceed as an in-person event, so council members worked with other organizations “to ensure the pro-life voice would still be heard.”

Along with the Archdiocese of Chicago and WeDignify, nearly 50 Knights helped organize a “Drive for Life” through the cities of Mundelein and Chicago, drawing more than 1,100 vehicles — holding 4,000 riders — from Illinois and nearby states. The council recruited and organized volunteers, helped with the setup and take-down of stages and audio equipment, directed traffic and helped park cars, and handed out pro-life signs. In addition, over 70,000 diapers were collected during the event.

— For family, Our Lady of Fatima Council 9636, Las Piñas in the metro area of Manila, Philippines, South Luzon: When pandemic restrictions limited the ability for people to gather, Council 9636 developed a plan that, beginning in July 2020, brought together Knights and their families, as well as other parishioners and their pastor, virtually every Saturday night to pray and share their needs and experience. They pray for the sick and those who have died. Over 250 people have participated in the more than 40 virtual family prayer nights that are still occurring.

— For community, St. Cecilia Council 7395, Claremore, Oklahoma: Council 7395 organized 30 members and 10 nonmembers to help the Benedictine monks of Clear Creek Abbey. They provided the funds and 3,200 total hours of experienced labor needed to rebuild a suspension bridge and build a gravel sifter used to maintain the abbey roads; construct and install roll cages for their tractors; and host a luncheon for 500 people.

The council also bought a new car for one of the abbey’s priests to help him travel and begin a new monastery. They also supported the community by preparing and donating 1,200 food boxes to people in need during the past year.

— Leave No Neighbor Behind: St. Bonaventure Council 7432, Calgary, Alberta: As part of the Leave No Neighbor Behind initiative, the Knights of Columbus response to the pandemic, Council 7432 “jumped into action” to help their pastor transition the parish to a virtual format by organizing 106 members and 168 nonmembers to provide 4,159 volunteer hours toward this effort.

They also volunteered to serve at Masses, take Communion to homebound Catholics, and carried out other worship activities to helped the parish resume operations. The council also raised nearly $7,000 to support the Society of St. Vincent de Paul and other charities during the pandemic.