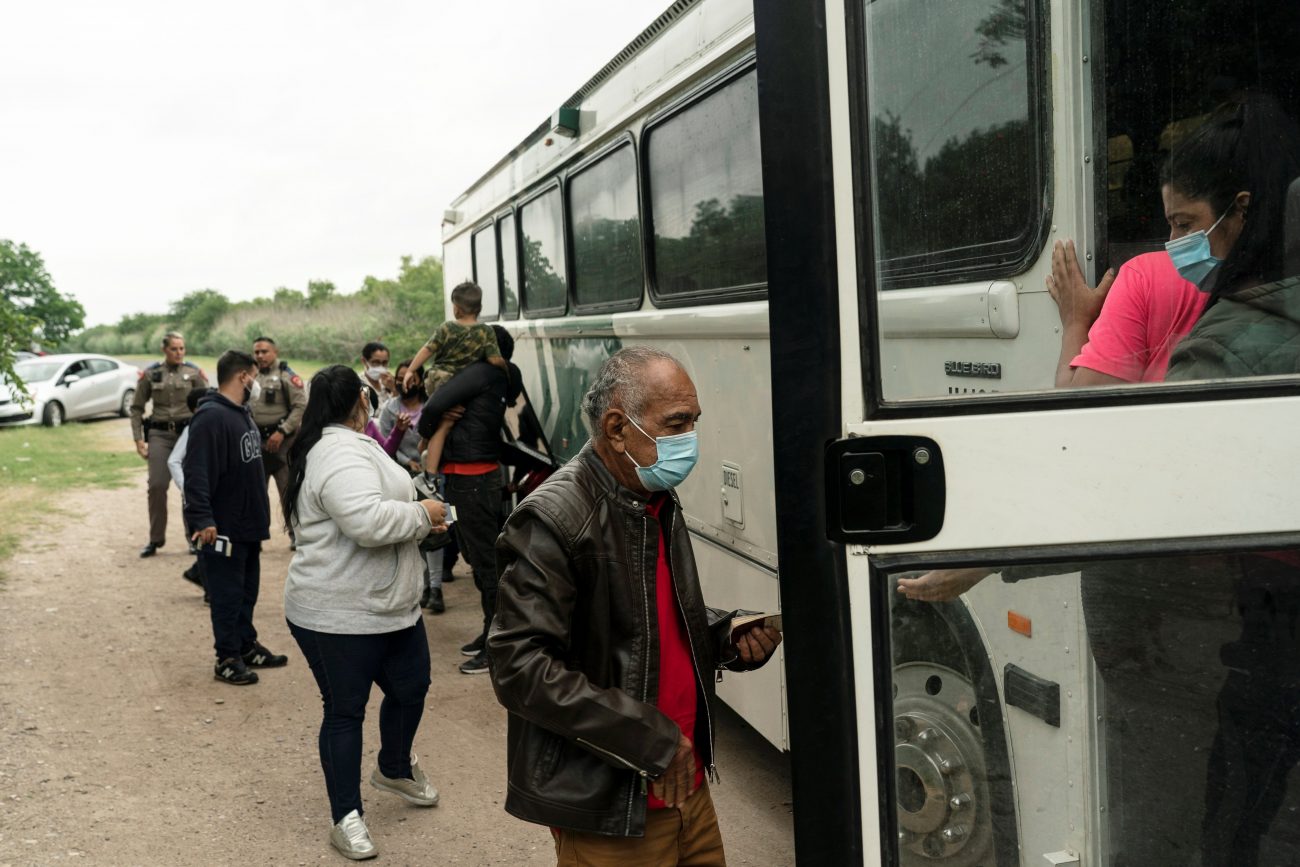 Migrant families from Venezuela seeking asylum board a U.S. Border Patrol's bus in Del Rio, Texas, May 27, 2021, to be transported after crossing the Rio Grande into the United States from Mexico. (CNS photo/Go Nakamura, Reuters)

A federal judge Aug. 3 temporarily blocked an order issued by the governor of Texas to halt transportation of migrants by anyone other than local or federal authorities following an incident involving a Catholic nonprofit.

Judge Kathleen Cardone of the U.S. District Court for the Western District of Texas in El Paso granted an emergency request from the Department of Justice, which said the order was “dangerous and unlawful.”

The department filed a lawsuit July 30 against the state of Texas, trying to stop enforcement of the order, which gives troopers the ability to pull over and impound a vehicle, if needed, that is suspected of transporting migrants.

The move halts enforcement at least until Aug. 13 when the judge is set to hear the case in court.

“The executive order causes irreparable injury to the United States and to individuals the United States is charged with protecting, jeopardizing the health and safety of noncitizens in federal custody, risking the safety of federal law enforcement personnel and their families, and exacerbating the spread of COVID-19,” the judge said in granting the emergency block of the executive order.

Texas Gov. Greg Abbott issued the executive order July 28 after authorities reportedly discovered a migrant family, being aided by the local Catholic Charities agency, at a fast-food restaurant without masks even though they were supposed to be in quarantine at a hotel after testing positive for COVID-19.

They were being helped by Catholic Charities of the Rio Grande Valley, which buses migrants to their shelters and now to hotels to quarantine when one or more family members test positive.

Sister Normal Pimentel, a member of the Missionaries of Jesus, who is executive director of the local Catholic Charities agency, said July 29 that while it’s true that one of the families that the nonprofit was helping “decided to go out of the (hotel) room and go buy a hamburger,” it was an isolated incident, and didn’t mean that all of them do that.

“What we’re seeing today, this misinformation, that it’s everybody, families are all over, exposing everybody to COVID, it’s false. It’s not true,” she said during a Facebook Live interview conducted by the Diocese of Brownsville, Texas.

The Texas governor, however, insinuated migrants are to blame for a rise in infections in the state and the measure was a way to stop COVID-19 from spreading into the community.

But others said his mismanagement of the pandemic in the state is to blame since he won’t call for a mask mandate as infections rise. Others like Brownsville Bishop Daniel E. Flores questioned in a tweet whether the order amounts to racial profiling.

Catholic Charities of the Rio Grande Valley, in the Brownsville Diocese, has a long history of helping migrants released from federal custody with food and shelter before they go to their final destinations in the U.S. The order had the potential to be disruptive to its daily operations since volunteers and others drive migrants to Catholic Charities shelters and, during the pandemic, to hotels to quarantine.

Though it doesn’t mention the incident, an Aug. 3 news release posted by Catholic Charities USA on its website explains the role of local member agencies.

“Once a migrant has been granted permission by the federal government to be present in the United States, they are sent to us for transitional care that is threaded with the dignity we believe should be afforded to every human — a warm meal, a shower, clean clothing, medicine and other supplies,” the release said.

“Within usually two days, the migrants leave our centers to continue their journey while they await the start of their immigration court process which can take years to conclude,” it continued. “The staff and volunteers have the utmost concern for the safety of the communities they live within and do everything they can to protect against the spread of COVID-19.

“They work with government officials to separate individuals and families who test positive to allow for isolation until a negative test is returned.”

It added: “Of course, we are concerned with our ability to care for the growing number of newcomers and we recognize the immigration system in the U.S. is in dire need of being retooled. While those laws and trajectories remain outside our control, all of our labors are done in congruence with U.S. law.”

“Their staff and hundreds of volunteers will continue to provide services to people in need,” the organization said in its statement.

“With constantly changing conditions, surges in border crossings, limited facilities, the media spotlight and the pressures of regulatory efforts meant to curtail their humanitarian work, they march on caring for one human life at a time — whether it be a fearful child or a parent seeking to provide for his or her family,” it said. “In caring for the stranger, they are the hands of Jesus Christ.”

In a brief statement, the Texas governor’s office said Aug. 3 that “the court’s recent order is temporary and based on limited evidence.”

“We look forward to providing the court with the evidence to support the governor’s executive order to protect Texans,” the statement said. “The Biden administration has knowingly — and willfully — released COVID-19 positive migrants into Texas communities, risking the potential exposure and infection of Texas residents.”

Abbott’s order “attempts to prevent the Biden administration from spreading COVID-19 into Texas and protect the health and safety of Texans,” it said.