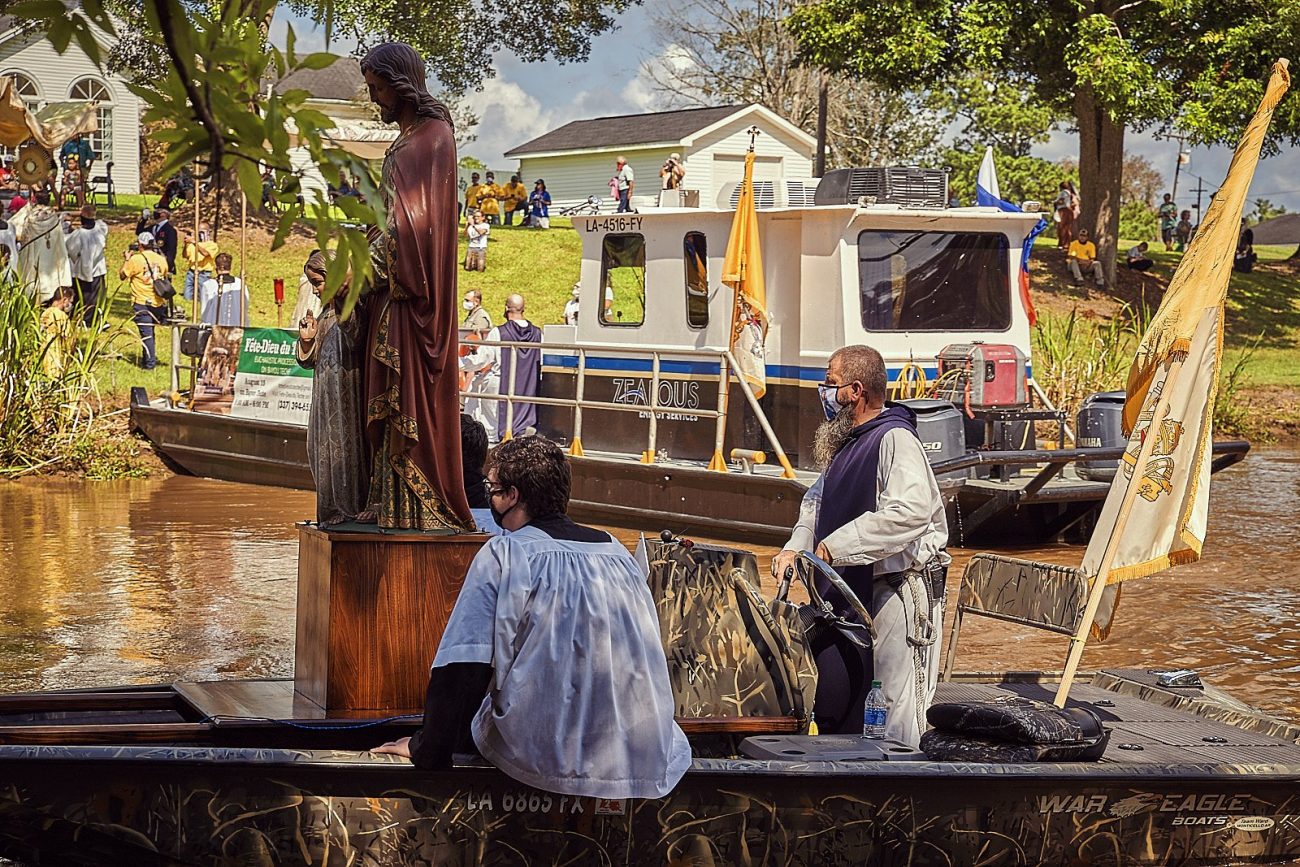 Seminarians accompany a statue of the Assumption of the Blessed Virgin Mary, following the Eucharist Boat on Bayou Teche near Arnoldville, La., as part of the Fête-Dieu du Teche procession Aug. 15, 2020. The Lafayette Diocese will hold its seventh annual 40-mile eucharistic boat procession Aug. 15, 2021, to celebrate the feast of the Assumption and to pray for "the sanctification and unification of families." (CNS photo/courtesy Chris Lancon)

LAFAYETTE, La. (CNS) — The annual Fête-Dieu du Teche in the Diocese of Lafayette is a “time for all of us to renew our faith,” following the example of the first Acadians who were “led by their faith” when they came to Louisiana, said Lafayette Bishop J. Douglas Deshotel.

The 40-mile eucharistic procession by boat and on foot along the Bayou Teche is now in its seventh year. It always takes place on the feast of the Assumption of the Blessed Virgin Mary, Aug. 15.

In addition to prayers to Mary, prayers will be offered this year for the sanctification and unification of families. In 2020, participants prayed for an end to the pandemic.

This year’s procession marks the 256th anniversary of the arrival of the Acadians. Persecuted for being Catholic, they were driven from what is now Nova Scotia and sent into exile. Many ended up settling in Louisiana.

They “were the first examples of ethnic cleansing in the New World when they were forced to leave their homes and go into exile because of their Catholic faith at the end of the French and Indian War,” Bishop Deshotel said in remarks ahead of this year’s Fête-Dieu du Teche.

“A large number of them found their homes in South Louisiana, which was Catholic and French,” he said. “Many settlements were established along the Teche river where they built churches, homes and a new life.”

“Just as they were led by their faith in Jesus the bread of life and in Mary the mother of Jesus, it is time for all of us to renew our faith,” he said.

The bishop prayed the faith of today’s Louisianans will “be strengthened,” as was the Acadians’ faith, “in Jesus, the way, the truth and the life. May we put ourselves under the protection of his Immaculate Mother, who is patroness of the Americas.”

Fête-Dieu du Teche will begin at with an 8 a.m. Mass celebrated in French by Bishop Deshotel at St. Leo the Great Catholic Church in Leonville.

Following the Mass there will be a procession with the Blessed Sacrament and a statue of Mary and St. Joseph to the nearby boat landing. Families are encouraged to join the procession as a family and follow it to the boat landing for Benediction.

The Blessed Sacrament will be fixed on an altar on the lead boat under a canopy. Another boat will carry the statue of the Assumption of the Blessed Virgin Mary.

At 9:30 a.m. boats will depart in procession down the Teche toward St. Martinville, retracing the voyage made by the Acadians 256 years ago. Bayou residents are encouraged to gather as a family and greet the Blessed Sacrament as it passes near their home.

The final stop will be St. Martinville, where participants will disembark and walk in procession to Notre Dame de Perpetual Secours for Benediction, then to St. Martin de Tours for benediction, and finally to Mater Dolorosa Chapel for solemn vespers and Benediction.

Confessions will be heard in mobile units at each of the stops along the way.

In addition to those who join in the eucharistic procession by boat, others with travel by car and gather along the banks of the Bayou Teche at various planned stops.

Father Michael Champagne, a priest of the Community of Jesus Crucified in St. Martinville, who is the organizer of the daylong event, said that “having a boat procession with the Blessed Sacrament and a statue of the Assumption involving priests, religious and laity is basically what happened in 1765.”

“In order to serve the Acadian settlers in the Attakapas district, Father Jean-Louis de Civrey accompanied the Acadians on their journey down the Bayou Teche,” which is a 125-mile-long waterway in south-central Louisiana.

“Having the Catholic priest accompany the Acadians on their journey to Acadiana is indicative of our ancestors’ great allegiance to their Catholic faith, especially the Eucharist and Our Lady,” added the priest.

Father Champagne said Pope Francis has granted participants of Fête-Dieu du Teche a plenary indulgence for those who attend the French Mass in Leonville, those who make the procession by boat, and those who participate in the devotions at one of the many stops along the Teche.

Those who are impeded for a serious reason from physically attending the procession also may gain the indulgence by “spiritually uniting their prayers and trials” with participants and praying “for fidelity to the Christian vocation, for the good of the family, and for priestly and religious vocations.”

Among those who have participated in the annual procession is Bishop Glen J. Provost of Lake Charles, Louisiana, who called it “a joyful celebration of the presence of our Lord, Jesus Christ, in the lives of his faithful followers.”

“I recall with great fondness my participation in the procession, surrounded by thousands of men, women and children, reaffirming our faith in the Eucharist, which is our Lord’s special gift,” he remarked. “What a transcendent moment! How privileged we are to express our faith in this way!”

Sister Marie-Thérèse, a member of the Community of Jesus Crucified, which was found in the Lafayette Diocese, said she received the grace of her vocation the day she attended the first eucharistic boat procession.

“Fête-Dieu du Teche 2015 was a day that seriously affected my vocation,” she recalled. “Being a part of a day so centered on Jesus in the Blessed Sacrament and his most Blessed Mother on the feast of the Assumption rocked my world.”

The Fête is such a visible, public manifestation of the faith,” she added, “but a lot goes on in the secret recesses of the heart during that grace-filled day.”

Editor’s Note: More information can be found online at https://www.jesuscrucified.net or www.facebook.com/CommunityofJesusCrucified. 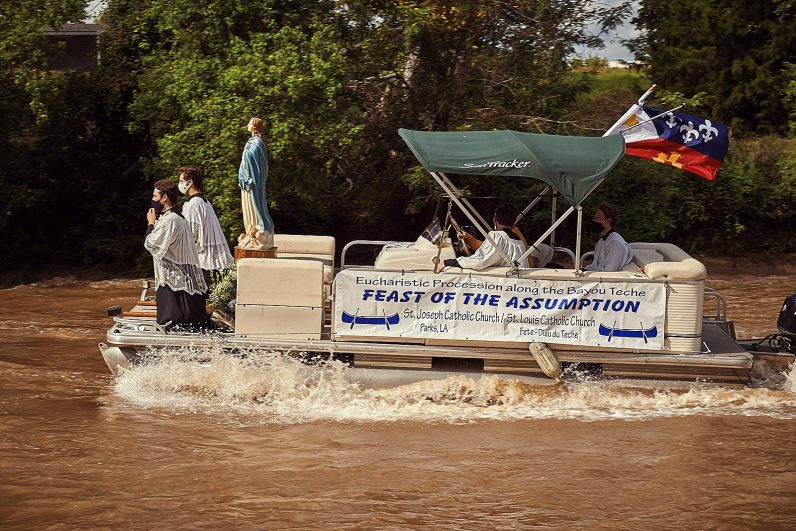 Father Michael Champagne, a priest of the Community of Jesus Crucified, operates the St. Joseph boat Aug. 15, 2020, near Arnaudville, La., as part of the Fête-Dieu du Teche procession during its first stop at St. Francis Regis Church on Bayou Teche in Arnaudville. The Lafayette Diocese will hold its seventh annual 40-mile eucharistic boat procession Aug. 15, 2021, to celebrate the feast of the Assumption and to pray for “the sanctification and unification of families.” (CNS photo/courtesy Chris Lancon)

NEXT: Priests urged not to give religious exemptions to COVID-19 vaccines