Australian school named for teen on way to sainthood 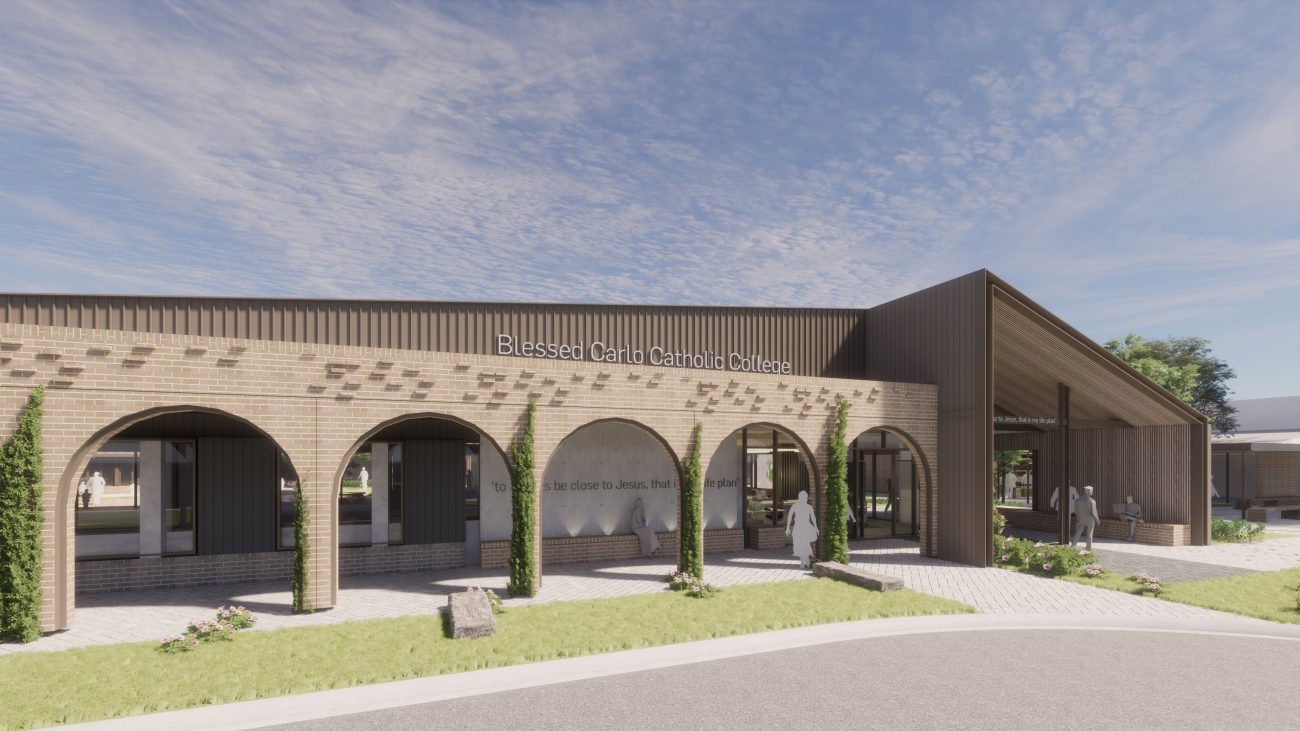 A rendition supplied by architects ClarkeHopkinsClarke depicts how Blessed Carlo Acutis College will look when constructed in the Australian outback Diocese of Wilcannia-Forbes. It is believed to be the world's first school to be named after the teenage computer programmer beatified by Pope Francis in 2020. (CNS photo/ClarkeHopkinsClarke via The Catholic Weekly)

SYDNEY (CNS) — An Australian outback diocese has announced what is believed to be the world’s first K-12 school to be named after a teenage computer programmer beatified by Pope Francis last year.

Blessed Carlo Acutis College will have a liberal arts focus, and Bishop Columba Macbeth-Green of the Diocese of Wilcannia-Forbes hopes to build it in Moama, a fast-growing Riverina town in the southern part of his vast sprawling New South Wales diocese.

“It is an honor to name our school after such an inspiring young person who showed that children and teenagers can live lives devoted to God and to caring for those around them,” Bishop Macbeth-Green said of the new college designed by ClarkeHopkinsClarke Architects.

“All the students will be proud of their school name knowing that they, too, can live inspiring lives for others.” He said he knows of only one other school named after the young saint-in-the-making, an online school based in Canada.

Anthony Gordon, diocesan director of Catholic education, said the college would serve the community of Moama and surrounding areas, beginning as a small school with highly personalized pastoral care and tuition for students in state-of-the-art facilities.

“Our demographic research suggests that Blessed Carlo will grow to a medium size college over the next 20 years, capable of maintaining this level of personalized approach,” he told The Catholic Weekly, newspaper of the Archdiocese of Sydney.

“The learning will have a ‘liberal arts’ feel about it due to the choice of texts and content, which will immerse our students into the beauty of Catholic life and culture.”

COVID-19 outbreaks in New South Wales and Victoria had postponed face-to-face consultations planned with Catholic families in Moama and surrounding areas, so feedback from these communities is being sought online. 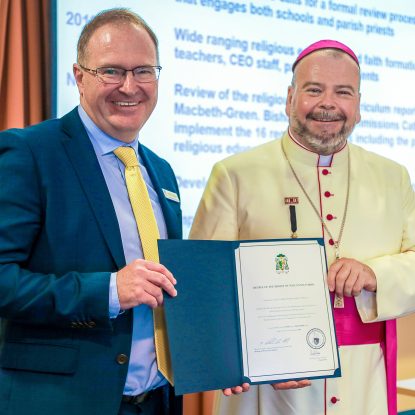 Anthony Gordon, director of Catholic Education for the Australian outback Diocese of Wilcannia-Forbes, and Bishop Columba Macbeth-Green are pictured in a Dec. 3, 2020, photo. The diocese has announced the planned construction of what it believes will be the world’s first Catholic school named for Blessed Carlo Acutis, an Italian teenager who died in 2006 and was beatified by Pope Francis in 2020.

The college will be the only systemic Catholic senior education offering in the Diocese of Wilcannia-Forbes, which covers more than 160,000 square miles with 19 parishes.

The diocese is also served by Red Bend Catholic College, a year 7-12 school in Forbes established by the Marist Brothers; it is more than five hours by car from the newly planned school.

In a letter announcing the college, Bishop Macbeth-Green said he hoped that since Blessed Carlo was known for using technology to spread the Gospel, he would show today’s young people how media can be used for the good of society.

He said the college would be “have at its heart” a daily life of prayer and devotion to the Eucharist, and all students would have the opportunity to build a deep friendship with Jesus.

“I couldn’t think of a more uplifting or relevant model for the young people of Moama,” the bishop said.

Blessed Carlo Acutis was only 15 when he died of leukemia in 2006.

The boy from Milan has been called the first millennial saint and “God’s influencer.” He was devoted to the Eucharist from the day of his first Communion and used his gifts to promote the world’s eucharistic miracles and the Catholic faith.

Well-liked among his peers, he enjoyed computer games and sports, especially soccer. He was devoted to daily Mass and the praying of the rosary, encouraged his mother to return to the practice of her faith, and said he was happy to die “because I lived my life without wasting even a minute of it on anything unpleasing to God.”

Rodrigues is a reporter for The Catholic Weekly, Sydney.

PREVIOUS: Rwandan immigrant turns himself in for killing French priest