Rwandan immigrant turns himself in for killing French priest 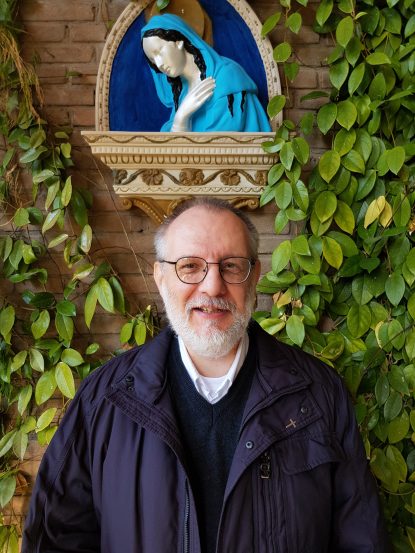 Father Olivier Maire, French provincial of the Montfort Fathers, is pictured in an undated photo. Rwandan immigrant Emmanuel Abayisenga, awaiting trial for the arson of the cathedral in Nantes, turned himself into police for killing Father Maire. (CNS photo/courtesy Montfort Missionaries)

SAINT-LAURENT-SUR-SÈVRE, France (CNS) — A Rwandan immigrant awaiting trial for the arson of the cathedral in Nantes turned himself in to police for killing the French provincial of the Montfort Missionaries.

Emmanuel Abayisenga, 40, a Catholic, had been released on bail earlier this year for the 2020 arson at Sts. Peter and Paul Cathedral in Nantes. Montfort Father Olivier Maire, 60, had offered him housing in Saint-Laurent-sur-Sèvre, south of Nantes.

At his general audience Aug. 11, Pope Francis told French-speaking visitors that it was “with great sorrow” that he learned of the Aug. 6 murder.

“I extend my condolences to the religious community of the Monfortians in Saint-Laurent-sur-Sèvre in Vendée, to his family and to all Catholics in France,” Pope Francis said, assuring everyone of his closeness.

Father Santino Brembilla, superior general of the Montfort Missionaries, described Father Maire as a “religious, a priest and a missionary of great value, a specialist in Montfort spirituality who accompanied his entire community in coming to a profound understanding of the message of their founder, Louise-Marie Gignion de Montfort,” Vatican News reported.

Archbishop Eric de Moulins-Beaufort of Reims, president of the French bishops’ conference, tweeted: “The murder of Father Maire is a terrible tragedy. He will have lived following Christ until the very end, in the unconditional acceptance of all. While waiting for more complete elements that the investigation will bring, I pray for his family and his religious brothers. I pray for all the people traumatized by this tragedy, for his assassin too, who is at least psychologically adrift, and I assure (Lucon) Bishop (Francois) Jacolin of my fraternal support. May God grant us the grace to serve him always and in all.”

U.S. Montfort Missionary Father Donald LaSalle served on the order’s general council with Father Maire 10 years ago and considered him a good friend.

“He was a wonderful confrere, a great preacher, steeped in the spirituality of St. Louis de Montfort. He was close to the people he served. His death is a great loss to the Montfort Missionaries and to the church,” Father LaSalle told Catholic News Service.

In an Aug. 9 statement on his diocesan website, Bishop Laurent Percerou of Nantes said he worked with Father Maire during 2021 on local parish concerns, appreciating his “qualities as a listener, his benevolence and sense of the church.”

French Sen. Bruno Retailleau sent a tweet paying tribute to Father Maire at the hand of someone he was housing out of charity.

“His death testifies to the kindness of this priest whom I knew well and whose depth of faith I had been able to appreciate. His death is a great loss,” the tweet said.

On July 25, 2020, Abayisenga admitted lighting two fires in the area of a 17th-century organ and a third above an electrical panel in the Cathedral of Sts. Peter and Paul a week earlier. He had been volunteering at the cathedral as a warden and had the keys to the building because he was responsible for locking it up on the day of the fire. He had been in the country since 2012.

Father Maire’s murder provoked criticism of French immigration policies from right-wing politicians, who questioned why Abayisenga was still in the country.

But Father Cédric Burgun, vice dean of the canon law faculty at the Catholic University of Paris, replied to a tweet by Marine Le Pen, president of France’s National Rally, saying that the French respect the law.

“This man was under police control, and it was the priest himself who took the risk of welcoming him! Because charity and mercy take risks that some politicians have forgotten,” Father Burgun tweeted. 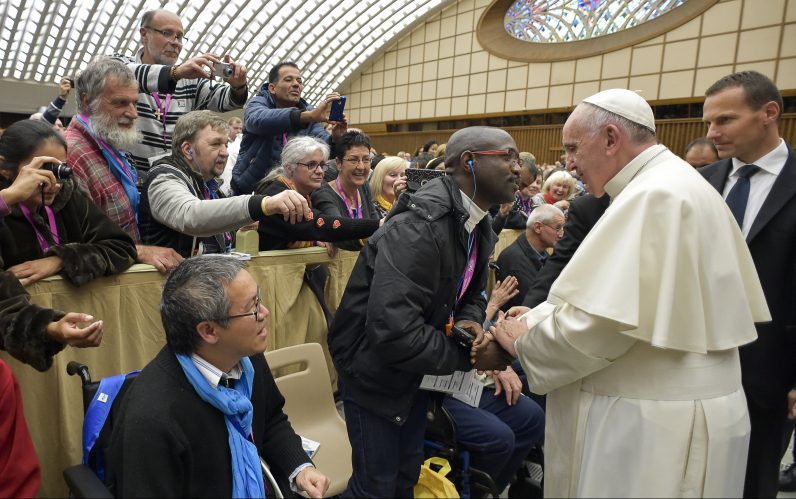 According to the French Catholic daily newspaper LaCroix, this photo shows Emmanuel Abayisenga, the man accused of killing Montfort Father Olivier Maire, meeting Pope Francis at the Vatican in 2016. The photo is from a Nov. 11, 2016, Year of Mercy jubilee event for people who are homeless or otherwise socially excluded. (CNS photo/Vatican Media)

NEXT: Australian school named for teen on way to sainthood