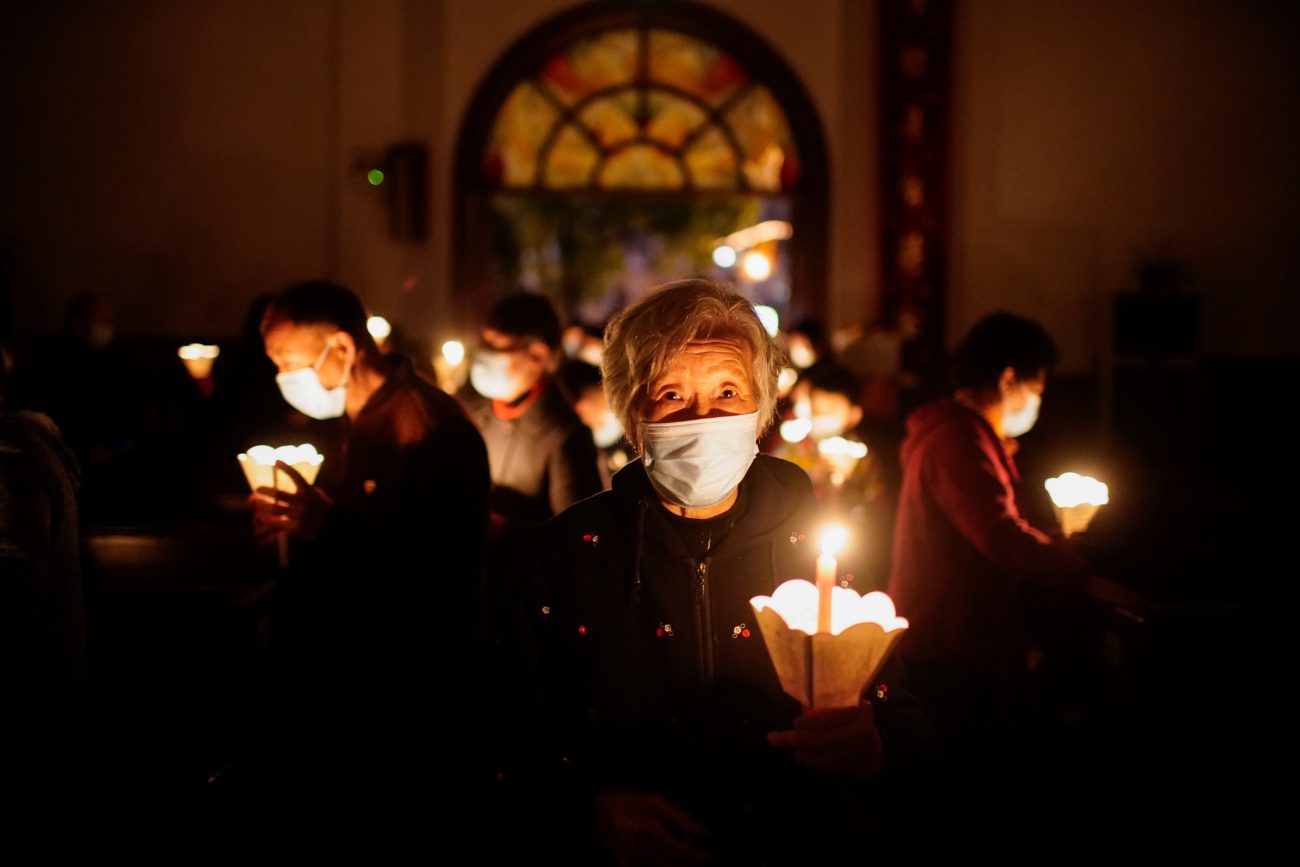 Worshippers holding candles and wearing protective masks pray during the Easter Vigil in Shanghai April 3, 2021, during the COVID-19 pandemic. In an interview published Aug. 12 with the Italian news site La Voce del Nordest, Cardinal Pietro Parolin, Vatican secretary of state, said that while the Holy See continues to dialogue with the Chinese government, the church continues to be proud of Catholics in the country for their "witness of faith." (CNS photo/Aly Song, Reuters)

VATICAN CITY (CNS) — While the Holy See continues to dialogue with the Chinese government, the church is proud of Catholics who have held on to their faith in the country, said Cardinal Pietro Parolin, Vatican secretary of state.

The church “accompanies them with so many prayers,” Cardinal Parolin said in an interview published Aug. 12 with the Italian news site La Voce del Nordest.

“We are proud of the witness of faith they give. We hope that they may always be good citizens and good Catholics. That is, that they may express this dual dimension, especially in their concrete lives,” he said.

Asked about the current status of diplomatic relations with China, the Italian cardinal, who was on vacation in the northern Italian province of Trentino, said that “now we are always in a phase of dialogue.”

In October, the Vatican and the Chinese government extended an agreement signed in 2018 regarding the appointment of bishops.

The provisional agreement, the text of which has never been made public, outlines procedures for ensuring Catholic bishops are elected by the Catholic community in China and approved by the pope before their ordinations and installations, according to news reports at the time.

Cardinal Parolin said that dialogue between the two countries has resumed after it “was interrupted” by the COVID-19 pandemic.

While the stalled dialogue has “been difficult,” the cardinal expressed his hope that discussions will resume soon and both countries will “deal with many other issues that are on the table that concern the life of the Catholic Church in China.”

The Vatican secretary of state was also asked about comments he made in a 2019 interview with the Italian newspaper, La Repubblica, in which he said “the West should apologize” for its criticisms against Pope Francis.

Among the harshest critics of the Vatican’s agreement with China was the U.S. Trump administration, including former U.S. Secretary of State Mike Pompeo. Prior to the agreement’s renewal, Pompeo tweeted that “the Vatican endangers its moral authority, should it renew the deal.”

In his interview with La Repubblica, Cardinal Parolin said that Western criticism of Pope Francis resembled “that of the eldest son in the parable of the prodigal son who sees the love of the father for his brother as an injustice.”

“The West is a bit like that son who has always lived closer to the father, but today no longer knows how to enjoy this closeness,” the cardinal said. “Today it is right to give more attention to those who in the past have had less, such as the people of Asia, who have known the Christian message less than others: in China only one inhabitant out of four knows who Jesus Christ is.”

“The West should understand this kind of ‘geopolitics’ more,” he said.

Explaining his words, Cardinal Parolin told La Voce del Nordest that criticisms against the pope “may lead to not understanding or easy acceptance” of his message.

“I believe that’s what I meant, in the true sense that the pope is showing a path — especially with ‘Fratelli Tutti’ — after the pandemic that can truly help us to get out of the sand traps in which our society finds itself in and start to build a new world, a better world,” he said.

NEXT: Greek archbishop eyes changes to prepare for future disasters