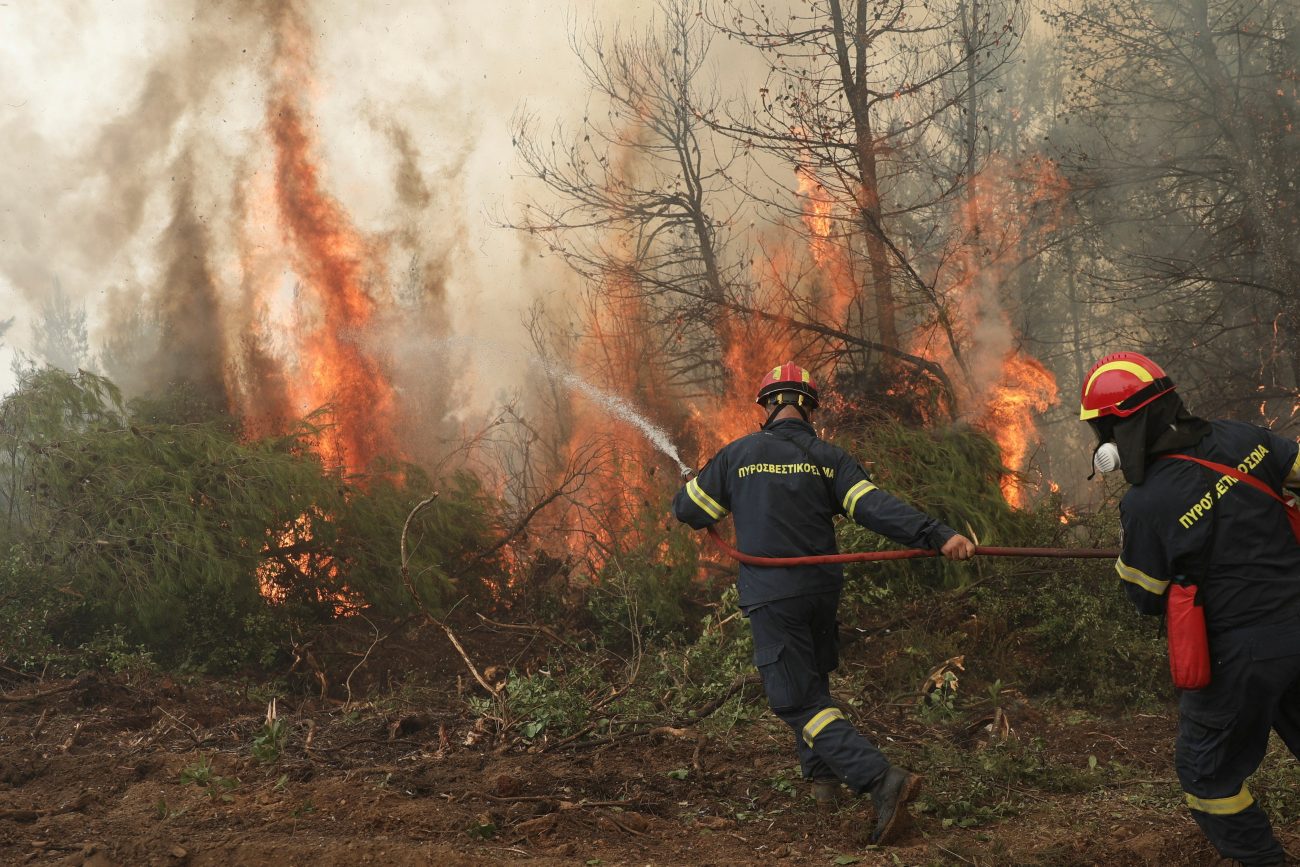 Firefighters try to contain a wildfire on the Greek island of Evia Aug. 10, 2021. Greece is facing a "natural disaster of unprecedented proportions," as nearly 600 wildfires burn in "all corners" of the country, according to Prime Minister Kyriakos Mitsotakis. (CNS photo/Stelios Misinas, Reuters)

OXFORD, England (CNS) — As a wave of wildfires devastated parts of Greece, a Catholic archbishop said different policies might be needed to help prevent recurrences.

“We must be much more sensitive and careful when it comes to ecology and preparedness — we don’t have many forests in Greece anyway, and much of what we have is now destroyed,” said Archbishop Josif Printezis of Naxos-Andros-Tinos-Mykonos, secretary-general of the Catholic bishops’ conference.

“No central or local government could ever be fully prepared for such events. But we should be more responsible, with more planes and equipment, and stricter regulations about house-building and access for emergency services,” he told Catholic News Service.

Firefighting teams from across Europe, assisted by water-bombing helicopters, struggled to control wildfires wreaking havoc in Greece’s Peloponnese and Attica regions, as well as on Evia, the country’s second-largest island, northeast of Athens.

Archbishop Printezis told CNS information was still being collected about damage to Catholic parishes, adding that he had been able to see and smell the mainland blazes from his residence on the Aegean island of Tinos, 70 miles from the fires.

Meanwhile, Caritas, the church’s charitable organization, said it was preparing a plan to help fire victims, in cooperation with municipal authorities and Catholic charities abroad.

“From the first moments of this latest tragedy, we’ve watched with concern, agony and pain, focusing our prayers on the victims and the destruction of creation, while congratulating those working to extinguish the fires,” the organization said Aug. 11.

“Having experience of emergencies, we know there are many initiatives for meeting immediate needs at the beginning, whereas social interest then decreases and the victims are left almost alone. This is where Caritas wishes to act.”

Hundreds of homes and properties have been reported gutted by nearly 600 fires, fueled by strong winds, parched vegetation and heatwaves of 113 degrees, leaving at least 200,000 acres of land scorched. Some estimate the affected areas are much wider.

Archbishop Printezis said many fire victims had no home insurance and little social security and would depend entirely on the government and Red Cross for food, water and shelter.

He added that the Catholic Church was working closely with Caritas branches in other countries and would count on Western help once the full damage was assessed.

“We also work well with the Orthodox Church when it comes to social needs, such as during past fires and earthquakes — in this sense, the crisis could bring us together and help force through improvements,” said the archbishop.

The Greek Orthodox Church appealed to its bishops to make schools, monasteries and parish centers available to the destitute and pledged help with rebuilding and reforestation. 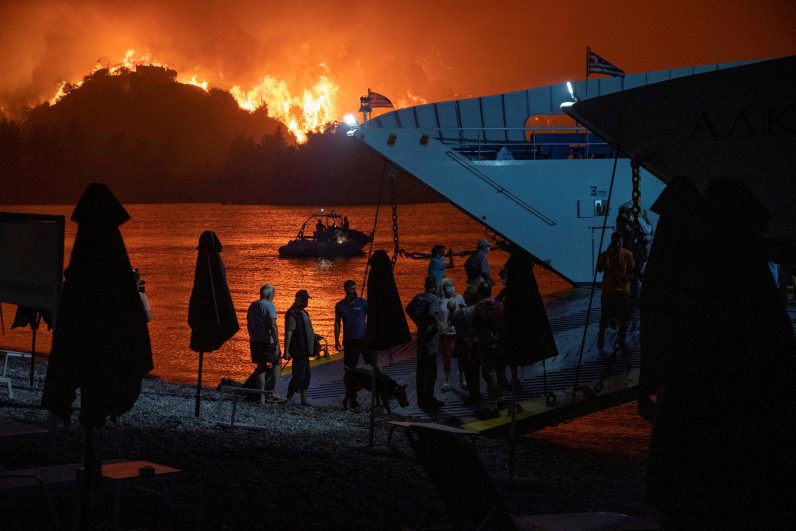 People board a ferry during evacuation as a wildfire burns on the Greek island of Evia Aug. 6, 2021. A Greek archbishop said the country must be more sensitive and careful when it comes to ecology and preparedness. (CNS photo/Nicolas Economou, Reuters)

NEXT: U.S. Cardinal Burke on ventilator, ‘serious but stable’