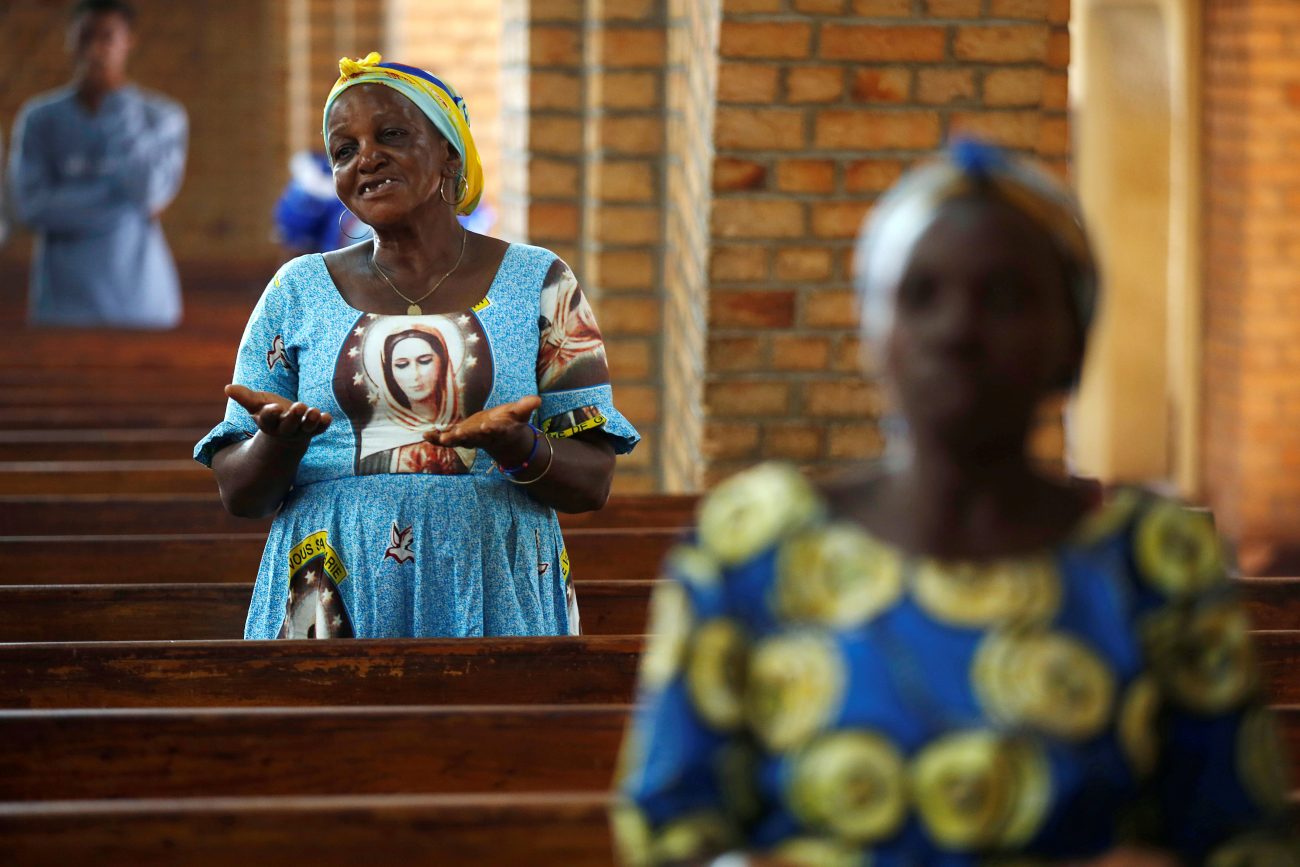 Women pray during a Mass at the cathedral in Kinshasa, Congo, Dec. 29, 2018. Catholic bishops in Congo are calling for an end to attacks on the church and its leaders, acts they see as linked to their persistent call for democracy and national cohesion. (CNS photo/Baz Ratner, Reuters)

NAIROBI, Kenya (CNS) — Catholic bishops in Congo called for an end to attacks on the church and its leaders, acts they believe are linked to the church’s persistent call for democracy and national cohesion.

The bishops said the Archdiocese of Kinshasa has been targeted as well as places of worship — including parishes, Marian grottoes, altars and sanctuaries — in the Diocese of Mbujimayi.

Bishop Bernard-Emmanuel Kasanda Mulenga of Mbujimayi had highlighted the saddening acts in a letter to the bishops’ conference July 26, saying the place had been desecrated.

The Congolese bishops’ conference, known by the French acronym CENCO, “strongly condemns these inadmissible acts of violence, which are a serious attack on freedom of religion and expression, but also a violation of democracy,” Father Donatien Nshole, conference general secretary, said in a statement Aug. 2. “It is a big step backward on the road to the rule of law to which the Congolese people aspire.”

Apart from the incidents in Mbujimayi, the bishops highlight two other incidents in which the church and its leaders have come under direct attack.

In an incident July 31, Augustin Kabuya, general secretary of the Union for Democracy and Social Progress, accused Cardinal Fridolin Ambongo and Father Nshole of politicizing the church, among other allegations.

On Aug. 1, a group of young people vandalized the headquarters of the Archdiocese of Kinshasa and the residence of the cardinal. They also yelled insults at the cardinal.

“Our pain is great as all these acts show hatred against the Catholic Church,” said Father Nshole.

While the motive of attacks is unknown, some observers believe it is linked to religious groups’ search for the chairman of the Independent National Electoral Commission. According to the constitution, choosing the chairman of the electoral commission is the duty of the faith leaders in the Central African country, where the majority of the Christians are Catholic.

“Why blame CENCO when it preaches national cohesion? Why attack her when she defends the independence of the Independent Electoral Commission? It is only accomplishing its prophetic mission in the search of the well-being of the Congolese people,” said Father Nshole, who also serves as spokesman for the religious forum.

In June, an improvised bomb exploded in a Catholic church in Beni, killing one person and badly injuring two others. The explosion occurred as the church prepared to hold confirmation for children.

Despite these attacks, the bishops have asked their followers to remain calm, reminding the people that violence kills democracy and replaces it with dictatorship.

The clerics also want the sponsors of the violence to stop and the government to identify, arrest and punish those involved.

PREVIOUS: Pope appeals for aid to Lebanon, still suffering one year after blast

NEXT: Hundreds of migrants stuck in limbo on rescue boats in Mediterranean