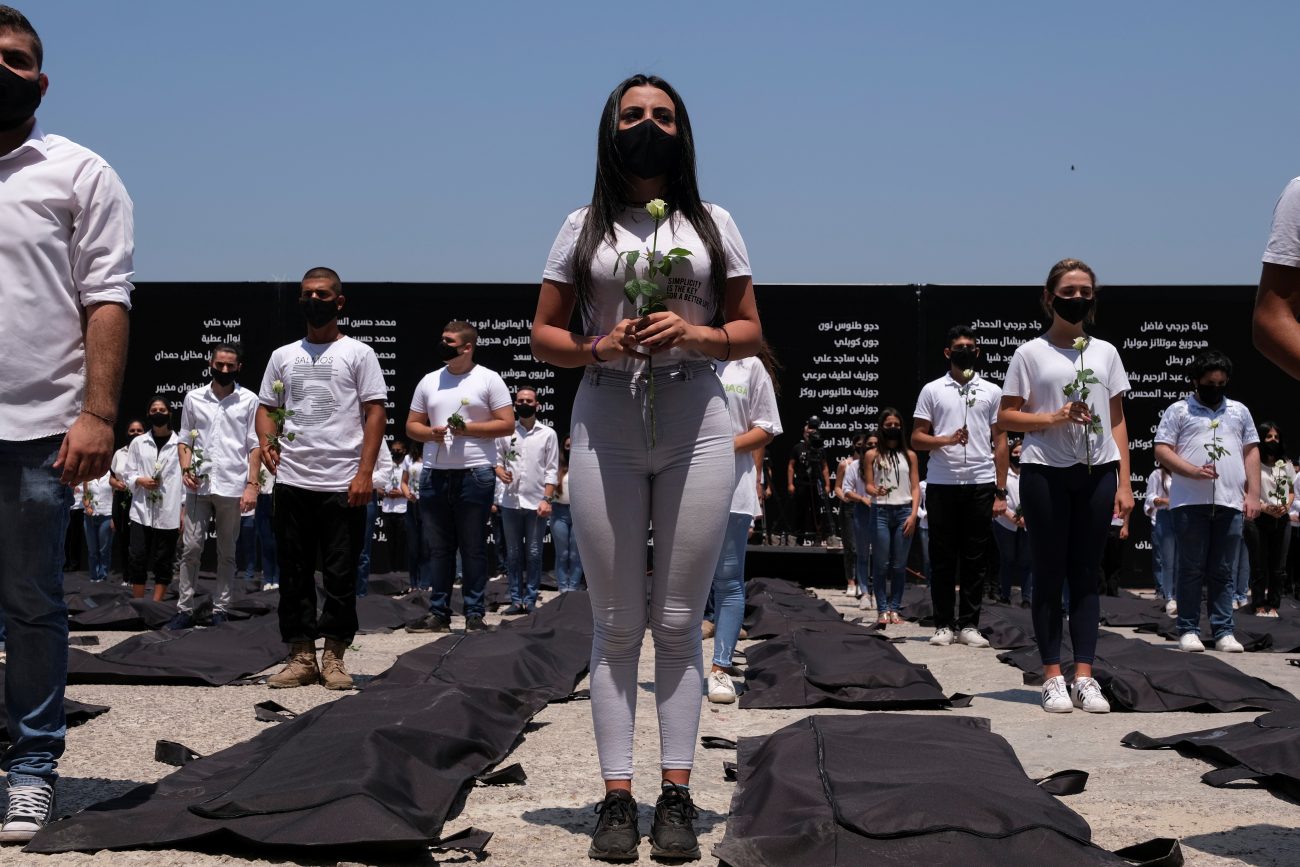 Students affiliated with the Lebanese Forces hold white roses and stand next to body bags in Beirut Aug. 4, 2021, in memory of victims of the 2020 Beirut port explosion. During his general audience Aug. 4, Pope Francis urged the international community to help Lebanon with concrete action so it may rise again as sign of peace and fraternity for the Middle East. (CNS photo/Emilie Madi, Reuters)

VATICAN CITY (CNS) — Marking the one-year anniversary of a deadly explosion in Beirut, Pope Francis said Lebanon needs concrete help — not just words — from the international community so it can emerge once again as a symbol of fraternity and peace for the Middle East.

“I think above all of the victims and their families, the many injured, and those who lost their homes and livelihoods. So many people have lost the desire to go on,” he said at the end of his general audience in the Paul VI audience hall Aug. 4.

“Dear people of Lebanon, I greatly desire to visit you and I continue to pray for you, so that Lebanon will once more be a message of peace and fraternity for the entire Middle East,” he said.

In the early evening of Aug. 4, 2020, a massive blast in a port warehouse destroyed large sections of the center of the capital, killing at least 214 people and injuring thousands more. It displaced 300,000 people.

The explosion — caused by a poorly stored stock of ammonium nitrate fertilizer — was one of the largest non-nuclear blasts in history. Protests were planned in the city Aug. 4 denouncing a lack of justice, transparency and accountability concerning the causes behind the blast and those responsible.

Meeting Aug. 3, an international support group for Lebanon made up of world leaders urged authorities to complete their investigations and bring justice to survivors.

French President Emmanuel Macron and U.N. Secretary-General António Guterres were hosting a donor conference Aug. 4 seeking to raise $357 million in aid to meet the country’s most urgent needs, providing food, education, health care and clean water. However, some world leaders have said their help would be conditional on Lebanon establishing a government that can fight corruption. Leaders in Lebanon have been unable to reach an agreement on forming a new government for the past 10 months, delaying reforms and tackling current crises.

After his Aug. 4 audience talk, Pope Francis appealed to the international community, asking it to help Lebanon, “not only with words but with concrete actions in undertaking a journey of resurrection.”

He said he hoped the conference led by France and the U.N. would prove fruitful.

He recalled the day of prayer for Lebanon, hosted July 1 at the Vatican, in which leaders of Christian churches reflected on the hopes and expectations of the people of Lebanon, who are also “tired and disillusioned,” and prayed that God give the “light of hope to overcome this difficult crisis.”

NEXT: Congo’s bishops want an end to attacks on Catholic Church, its leaders