Diaspora and disease: Pope will face pressing issues on next trip abroad 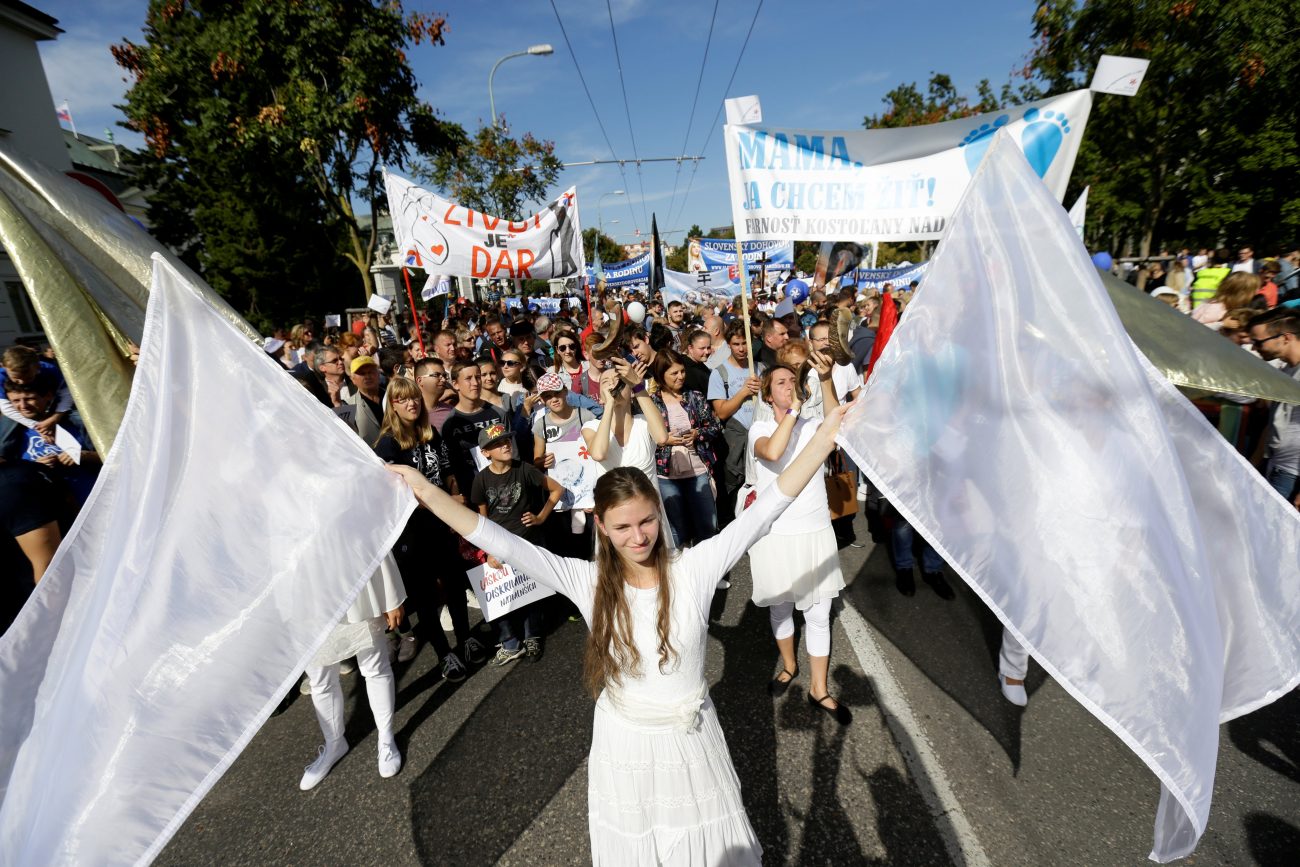 VATICAN CITY (CNS) — Pope Francis’ upcoming trip to Hungary and Slovakia, while seemingly standard as papal visits go, could prove to be among his most challenging visits at a time when distrust in government authorities and the looming threat of the delta variant are leading the headlines.

When he visits Slovakia Sept. 12-15, Pope Francis, who throughout his pontificate has strongly denounced corruption and organized crime, will be seen as an important advocate after several tumultuous years that saw massive protests in the country and a series of changes of governments. Since 2018, two governments were ousted because of corruption.

Most recently, “at the beginning of the first wave of the pandemic, the government in Slovakia changed,” said Jesuit Father Vlastimil Dufka, who will direct the choir at the pope’s Mass at the Basilica of Our Lady of Seven Sorrows in Sastin Sept. 15.

“The previous government was marked by many corruption cases, and the arrival of a new government brought new hope to our country,” he told Catholic News Service.

But recent legislation requiring vaccinations sparked protests in the country, causing divisions and tensions, including within the Catholic Church.

“Without any preparation, from one day to the next, the bishops’ conference ordered the receiving (of) Communion by hand, not by mouth, which was unusual in our country,” Father Dufka told CNS. “With the third wave of the pandemic coming, all who wish to attend the meeting with Pope Francis will have to be vaccinated, which is unacceptable to many.”

Father Martin Kramara, spokesman for the Slovak bishops’ conference, told Catholic News Service Aug. 20 that the government’s mandate for all participants of papal events to be vaccinated “is no small challenge to organize.” 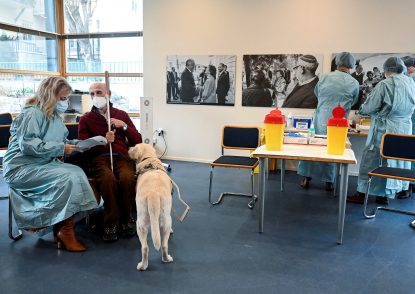 “People will have to be divided in sectors and not allowed to change them. We must keep their phone numbers and emails to be able to trace contacts” in case someone in the sector later tests positive for COVID-19, Father Kramara explained.

“We already see it is discouraging many from participation. But we live in conditions of the pandemic, and we have to adjust to the measures in order to protect lives,” he said.

Despite the challenges, Father Kramara said the pope’s visit to the country, especially to a homeless shelter run by the Missionaries of Charity and to Slovakia’s Roma community, are a much-needed reminder of the church’s primary mission.

The pope, he said, wants to show the local church and religious communities’ “sacrificial activities for the benefit of the poor and needy, those who are on the periphery of society, and he reminds us of the important truth that living faith must always be connected with active love in deeds.”

Father Kramara told CNS that since St. John Paul II visited in 2003, “Slovakia has changed both religiously, culturally and politically.”

“It is surely more secularized,” he said. “We are aware of these changes and strive to find correct answers to them, in faithfulness to God’s word. In spirit of everything, I hope that the reverential respect and love for the bishop of Rome will continue to be very visible, and with God’s help we will experience it even now.”

Long mired by accusations of corruption, the government of former Slovak Prime Minister Robert Fico came to an end after the murder of Ján Kuciak, an investigative journalist, and his fiancee, Martina Kusnírová, in 2018.

Massive protests engulfed the country after the double homicide, with many believing that the young couple were murdered due to Kuciak’s reporting of government corruption and connections between members of the ruling Direction-Social Democracy party and the Italian organized crime syndicate, ‘ndrangheta.

Fico resigned that same year and his deputy prime minister, Peter Pellegrini, was appointed his successor. However, Pellegrini was ousted in the 2020 elections in which the Ordinary People party, an anti-corruption movement, won a majority of parliamentary seats.

For Father Dufka, Pope Francis’ presence at the Marian basilica in Sastin, an important place of pilgrimage for Catholics in the country, will help “strengthen our own spiritual identity.”

“I believe that the visit of the Holy Father to Slovakia will be a new impetus for strengthening the unity of the ecclesial community,” Father Dufka told CNS. “I hope that this visit will strengthen the sensitivity to important accents of the pontificate of Pope Francis presented in his encyclicals, especially the sensitivity to the poor and to issues of ecology.”

The pope’s trip begins in Budapest, Hungary, where he will preside over the closing Mass of the International Eucharistic Congress Sept. 12.

While the main purpose of the pope’s trip to Hungary is to celebrate the closing Mass, the pope will meet with Hungarian President János Áder and Prime Minister Viktor Orbán, before flying out the same day to Bratislava, Slovakia.

That meeting with Orbán, as well as the brevity of his visit — a mere seven hours — was the subject of much speculation.

The Hungarian prime minister, who often has portrayed himself as the standard bearer for European Christianity, finds himself at odds with Pope Francis, particularly when it comes to immigration.

According to the Financial Times, during a 2017 speech to European center-right leaders, Orbán said “migration turned out to be the Trojan horse of terrorism” that threatened Europe’s “Christian identity.”

His views stand in stark contrast to those of Pope Francis, who has denounced growing anti-immigrant sentiment in Europe and abroad and said the exclusion of migrants was the result of the “privileges of the few, who, in order to preserve their status, act to the detriment of the many.”

“This is a painful truth; our world is daily more and more elitist, more cruel toward the excluded,” the pope said in 2019 during a Mass commemorating the World Day of Migrants and Refugees.

After meeting the two leaders in Budapest’s Museum of Fine Arts, the pope will meet with the country’s bishops, representatives of other Christians churches and Jewish communities in Hungary.

According to statistics published in the CIA’s World Factbook, in Hungary, Catholics make up 37.2% of the population while 11.6% are Calvinist, 2.2% are Lutheran and 1.8% are Eastern Catholic.

The World Jewish Congress stated on its website that between 75,000 and 100,000 Hungarian Jews live in the country, making it the largest Jewish community in Central Europe. 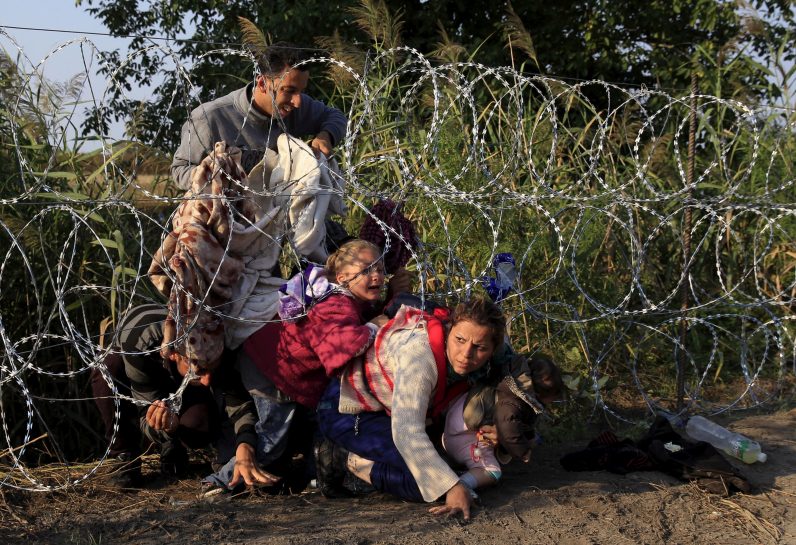 Syrian migrants cross under a fence as they enter Hungary at the border with Serbia, near Roszke, Hungary, Aug. 27, 2015. Pope Francis is scheduled to visit Hungary Sept. 12, 2021, en route to Slovakia. (CNS photo/Bernadett Szabo, Reuters)