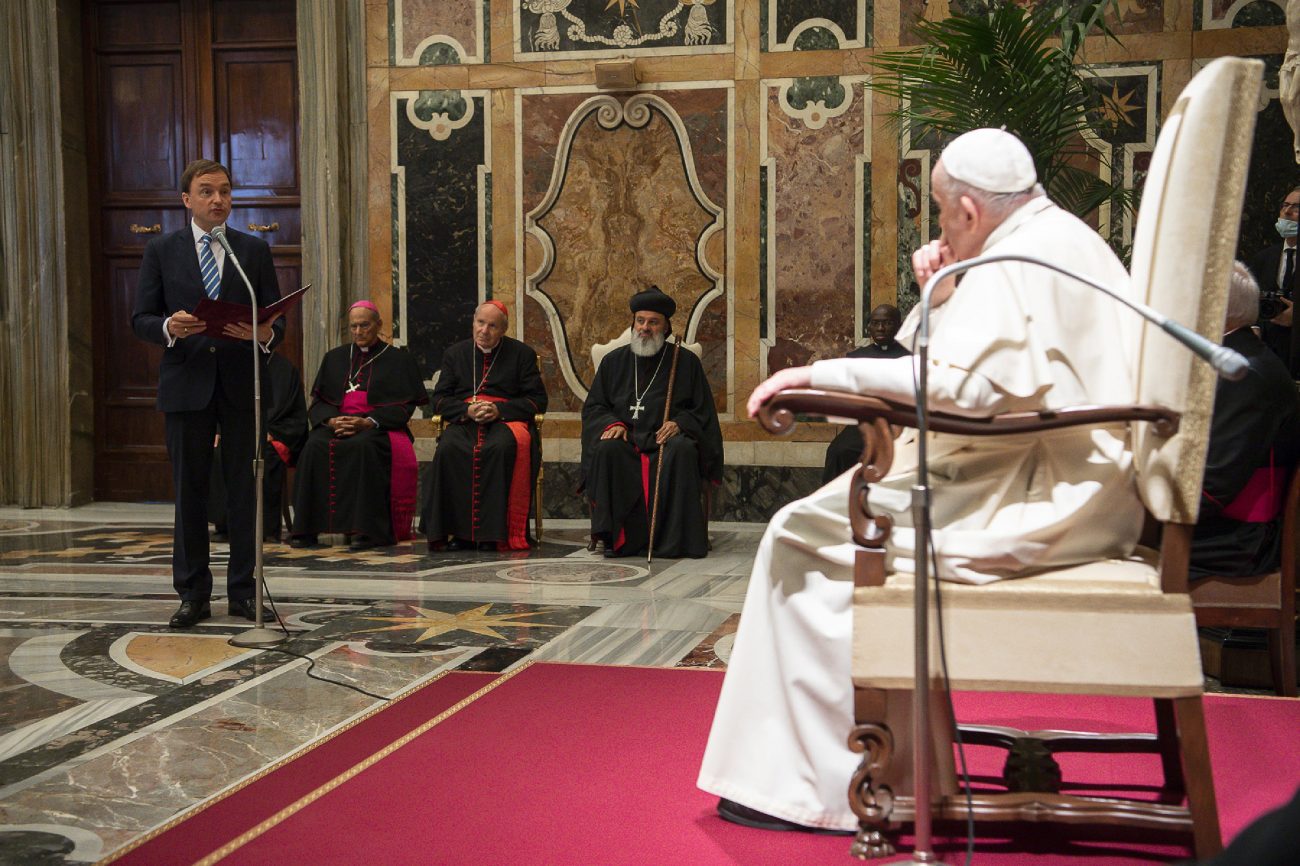 “Prudent legislation can guide the development and application of technology in the service of the common good,” he said during an audience at the Vatican Aug. 27.

“I heartily encourage you, therefore, to make every effort to undertake serious and in-depth moral reflection on the risks and possibilities associated with scientific and technological advances, so that the international laws and regulations governing them may concentrate on promoting integral human development and peace, rather than on progress as an end in itself,” the pope said.

Pope Francis was speaking to members and representatives of the International Catholic Legislators Network, who were in Rome for an annual conference. The network is an independent, nonpartisan initiative founded in 2010 “to bring together practicing Catholics and other Christians in elected office on a regular basis for faith formation, education and fellowship,” according to its website. It has headquarters in Vienna and an office in Washington, D.C.

The pope told those in attendance that one of the greatest challenges today is making sure technology is used for the common good.

“The wonders of modern science and technology have increased our quality of life,” he said, and it is important to encourage ongoing advancements and the new possibilities they open up.

However, technology cannot be left on its own “and to market forces alone without suitable guidelines provided by legislative assemblies and public authorities guided by a sense of social responsibility,” he said. Otherwise, “these innovations can end up becoming a threat to the dignity of the human person.”

“By means of policies and regulations, lawmakers can protect human dignity from whatever may threaten it,” Pope Francis said.

“I think, for example, of the scourge of child pornography, the misuse of personal data, attacks on critical infrastructures such as hospitals and the spread of false information on social media and so on,” he said.

Another problem, he said, is the COVID-19 pandemic, which “continues to rage.”

“This terrible scourge” has resulted in more than 200 million confirmed cases and 4.4 million deaths as well as “immense economic and social devastation,” he said.

“Although significant progress has been made through the creation and distribution of effective vaccines, much work remains to be done,” he added.

He said, lawmakers and government representatives are “charged with serving the common good” and the challenge now is a holistic “renewal of your communities and of society as a whole.”

This requires more than “simply combatting the virus or seeking to return to the status quo prior to the pandemic; no, that would be a failure. It demands confronting the deeper causes that the crisis has laid bare and aggravated: poverty, social inequality, widespread unemployment and the lack of access to education,” he said.

“In an age of upheaval and political polarization, legislators and politicians in general are not always held in high esteem. Yet what loftier vocation can there be than that of serving the common good and placing the welfare of the community before our personal advantage?” he asked.

“That must always be your goal, for good politics is indispensable for universal fraternity and social peace,” he said.

Everyone is called to “foster the spirit of solidarity, starting with the needs of our weakest and most disadvantaged brothers and sisters,” he said.

“If we are to heal our world so harshly tried by the pandemic and build a more inclusive and sustainable future in which technology serves human needs without isolating us from one another, we need not only responsible citizens, but also capable leaders inspired by the principle of the common good,” he said.

The pope asked them to be “leaven for the renewal of minds, hearts and spirit, witnesses of ‘political love’ for the most vulnerable, so that, in serving them, you may serve him in all that you do.”

PREVIOUS: Diaspora and disease: Pope will face pressing issues on next trip abroad