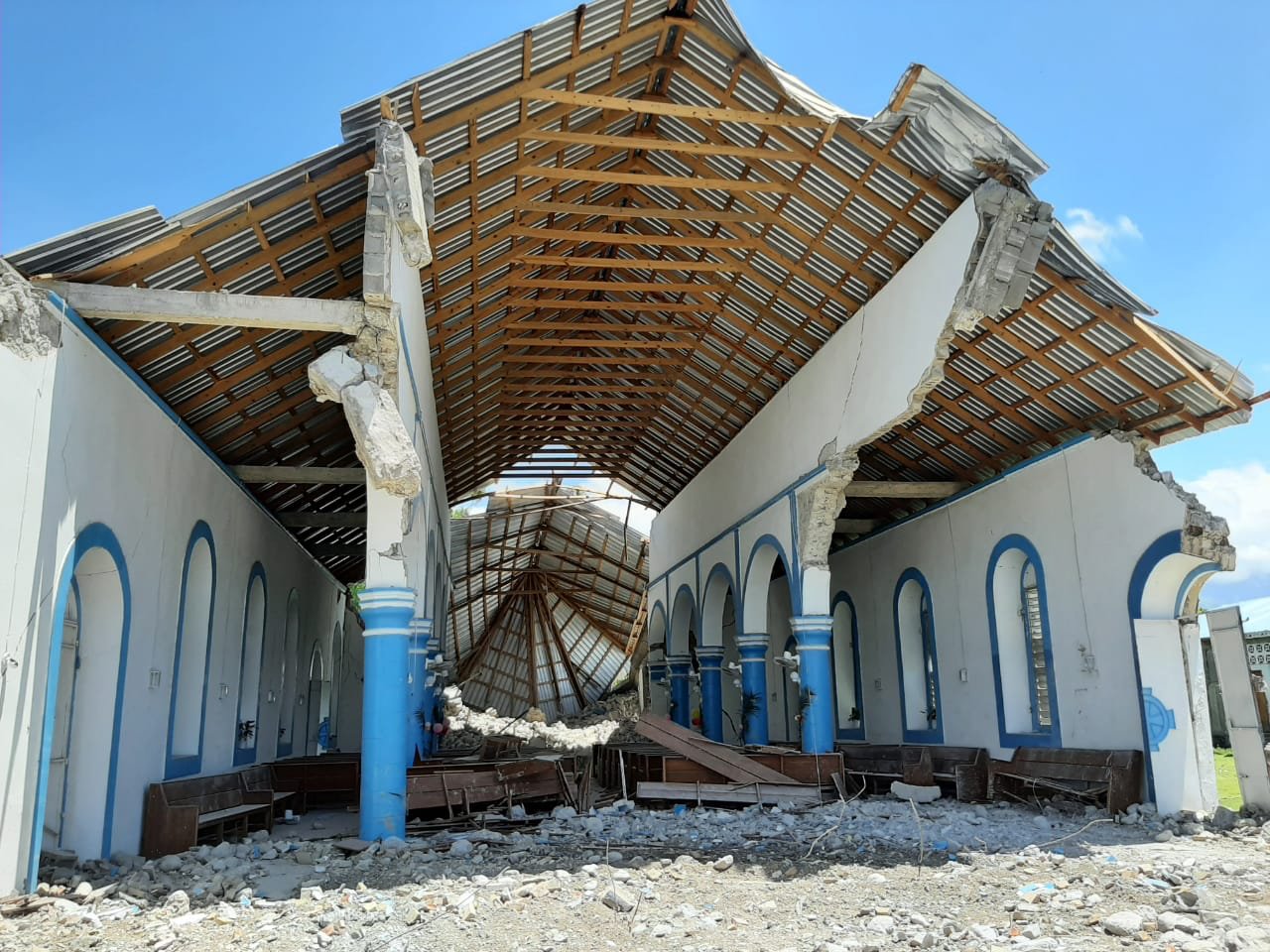 The destroyed Immaculate Conception Church is pictured in Les Anglais, Haiti, Aug. 14, 2021, after a magnitude 7.2 earthquake. At least 18 people were reported killed in the church. (CNS photo/courtesy AVSI)

Father Emile Beldor died of his injuries after the Aug. 14 quake. Father Jean-Antoine Coulanges is reported missing. Cardinal Langlois sustained arm and leg injuries; church sources say his life is not in danger.

Voice of America reported that 18 people, assembled for a baptism, were killed in Immaculate Conception Parish church of Les Anglais.

The Haitian civil protection service reported late Aug. 15 that nearly 1,300 people had been killed, more than 5,700 were injured and more than 30,250 families needed shelter.

Those numbers were expected to rise as a tropical depression headed toward the island. The agency warned people to expect strong winds, landslides and flooding in addition to heavy rain and rough seas.

At the Vatican Aug. 15, Pope Francis expressed his condolences and closeness to the Haitian people.

“While I lift up my prayer to the Lord for the victims, I extend my word of encouragement to the survivors, hoping that the interest of the international community to help might move toward them,” the pope said during his Angelus address. Leading pilgrims in praying a “Hail Mary” for Haiti, the pope prayed that the “solidarity of all alleviate the consequences of the tragedy.”

Bishop Joseph Gontrand Décoste of Jérémie also called on the international Catholic community for help to rebuild. The diocesan cathedral’s roof was ripped off for the second time in less than five years.

“The population is desperate and beleaguered. They are sleeping outside under the trees, in open public spaces, to protect themselves from aftershocks arriving every few hours,” Bishop Décoste told Vatican News a few hours after the earthquake struck, damaging road infrastructure and effectively cutting off the area from the rest of the country.

“We are in distress. We are counting on your solidarity, your proximity.” 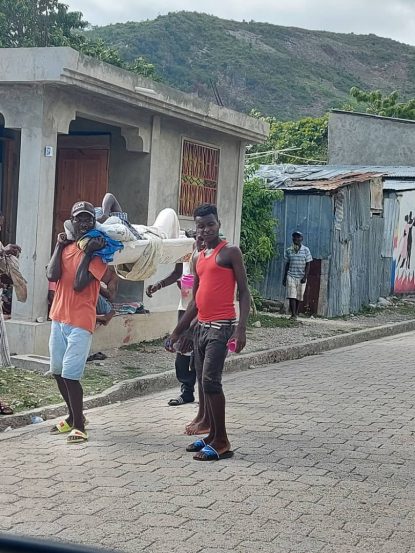 Residents carry an injured person on a stretcher to a Doctors Without Borders hospital in Port-à-Piment, Haiti, Aug. 14, 2021, after a magnitude 7.2 earthquake. (CNS photo/Elifaite St. Pierre, courtesy Institute of Technology and Animation)

“On this day when we celebrate the Assumption of the Blessed Virgin Mary, we ask her to sow hope in the heart of a people so harshly tried by this powerful earthquake,” Bishop Décoste said.

Shortly after the news of the quake, Archbishop José H. Gomez of Los Angeles, president of the U.S. Conference of Catholic Bishops, urged people to help by contributing to Catholic Relief Services, the U.S. bishops’ relief and development agency. CRS works in Haiti and partners with Caritas, the international umbrella organization for the church’s charitable agencies. He also offered prayers for those who had lost loved ones.

“We offer our prayers to Archbishop Launay Saturné, president of the bishops’ conference of Haiti, and to all those who tirelessly serve the faith communities in Haiti. We stand in solidarity with the church in Haiti,” Archbishop Gomez said.

In just the Diocese of Jérémie, the Catholic charitable agency Caritas reported the total destruction of the parish church in Corail.

In Les Cayes, next door to the bishop’s residence, the Catholic radio station was unharmed, but the Sacred Heart Parish Church, also in Les Cayes, was destroyed.

Further south, on the dusty road that leads toward the westernmost point of the island at Anse d’Hainault, a deep fissure in the road at Port-à-Piment cut off the remote region from the rest of the country. Other church structures were reported damaged, including Our Lady of the Rosary Church in Port-à-Piment and a dispensary in the neighboring town of Roche-à-Bateau.

In Cavaillon, northeast of Les Cayes, the parish church of Our Lady of Perpetual Help was destroyed, as were the town hall and the police station.

NEXT: Here’s where to donate to help agencies respond to the Haiti earthquake