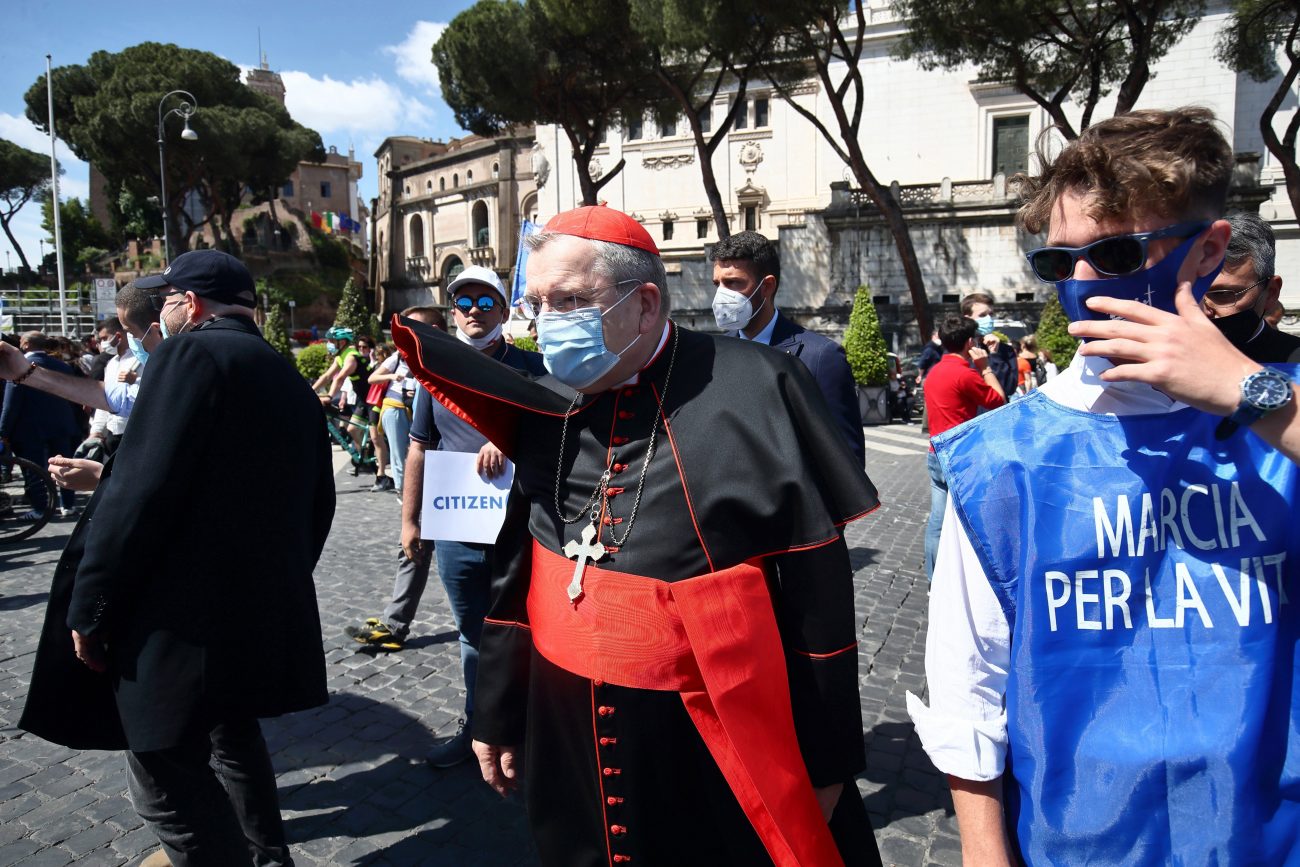 Father Paul N. Check, executive director of the Shrine of Our Lady of Guadalupe in La Crosse, Wisconsin, Cardinal Burke’s home diocese, said the cardinal’s family “does not plan to disclose his location” but thanked the faithful for prayers and rosaries being said for him.

“The cardinal has received the sacraments from priests nearby to him. There are several relics in his room,” the statement said.

“His family — who with a team of doctors, is responsible for all medical decisions while the cardinal remains sedated and on a medical ventilator — has great confidence in the care he is receiving,” said the statement posted on the shrine’s website.

“The period of hospitalization, and for now isolation because of the COVID virus, may be prolonged as His Eminence’s body fights the infection and recovers strength,” the statement said. “For the time being, the sedation assists his own peace and rest.”

On Aug. 14 the cardinal’s official Twitter account @cardinalrlburke published a tweet that said Cardinal Burke had been admitted to the hospital with COVID-19 and was “being assisted by a ventilator. Doctors are encouraged by his progress.”

The tweet said the cardinal had “faithfully prayed the rosary for those suffering from the virus. On this vigil of the Assumption, let us now pray the rosary for him.”

The cardinal had first tweeted Aug. 10: “Praised be Jesus Christ! I wish to inform you that I have recently tested positive for the COVID-19 virus. Thanks be to God, I am resting comfortably and receiving excellent medical care. Please pray for me as I begin my recovery. Let us trust in Divine Providence. God bless you.”

The cardinal has not made it public knowledge on whether he was vaccinated for the 2019 novel coronavirus.

The Vatican had started offering all Vatican residents, retirees and employees the vaccine developed by Pfizer and BioNTech mid-January 2021. The 73-year-old cardinal was eligible for the vaccine as a member of the College of Cardinals and a member of the Apostolic Signatura, which he led as prefect from 2008 until his resignation in 2014.

Pope Francis, who received the vaccine as soon as it was available along with retired Pope Benedict XVI, said people have a moral obligation to be vaccinated as soon as possible “because it is about your life but also the lives of others.”

Before the vaccines had been made available to the public, Cardinal Burke had voiced some concerns during a May 2020 talk to the Rome Life Forum about the impact of the international health crisis, particularly on people’s access to the sacraments.

— The belief there was “a certain movement to insist that now everyone must be vaccinated against the coronavirus COVID-19 and even that a kind of microchip needs to be placed under the skin of every person, so that at any moment he or she can be controlled by the state regarding health and about other matters which we can only imagine.”

— That it is “never morally justified to develop a vaccine through the use of the cell lines of aborted fetuses. The thought of the introduction of such a vaccine into one’s body is rightly abhorrent.”

— “Vaccination itself cannot be imposed, in a totalitarian manner, on citizens.”

He said, “while the state can provide reasonable regulations for the safeguarding of health, it is not the ultimate provider of health. God is,” and it would be God who offers “the direction and strength to take whatever human measures are required to protect ourselves, according to the demands of right reason and of the moral law.”

The Vatican Congregation for the Doctrine of the Faith published a note Dec. 21, 2020, reiterating church teaching that when alternative vaccines are not available, it is morally acceptable to receive vaccines developed or tested using cell lines originating from aborted fetuses, in this case, including COVID-19 vaccines.

However, “both pharmaceutical companies and governmental health agencies are therefore encouraged to produce, approve, distribute and offer ethically acceptable vaccines that do not create problems of conscience for either health care providers or the people to be vaccinated,” it added. The Pfizer and Moderna vaccines did not use abortion-derived cell lines in developing or producing their vaccines, but they did in lab testing.

In a March 21, 2021, post, “Combat against the Coronavirus, COVID-19,” on his website cardinalburke.com, the cardinal encouraged people to avoid close contact with others, particularly through group gatherings, disinfect surfaces and quarantine when testing positive.

The crisis was an opportunity for people to turn more deeply to their faith and the importance of the sacrament, he added.

While the cardinal often resides in Italy, he travels extensively and was in the United States at the time of sharing the news about contracting the virus.

NEXT: Priest killed, one missing as church assesses damage from Haiti quake