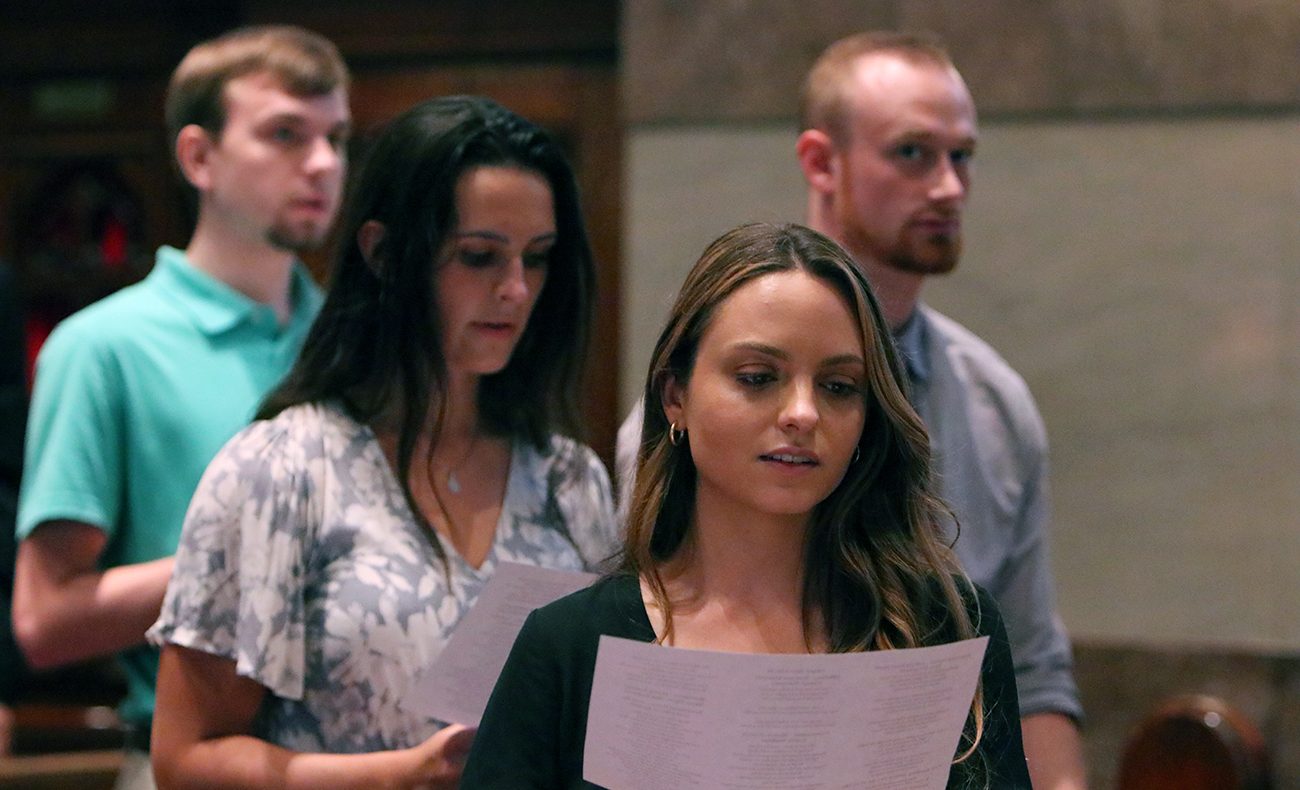 A young woman participates in an Aug. 21 Mass at the National Shrine of St. John Neumann to mark the launch of a Philadelphia chapter of Young Catholic Professionals, a national networking organization to bring "work as a witness to Christ." (Sarah Webb)

Some 250 young adults got down to business last week as a national organization for Catholic workers launched its Philadelphia chapter.

Last Saturday, Young Catholic Professionals (YCP) was formally established in the Philadelphia Archdiocese at the invitation of Archbishop Nelson Pérez, who marked the occasion with a Mass and reception at the National Shrine of St. John Neumann in the city’s Northern Liberties section.

Headquartered in Dallas, YCP was founded in 2010 by financial consultant Jennifer Baugh as a means of challenging and training young adults to transform their work into a witness for Christ. The nonprofit, which counts 27 U.S. chapters, draws professionals in their 20s and 30s together for executive speaker presentations, networking events, retreats and a weekly telephone prayer to St. Joseph, the group’s patron.

The Catholic Foundation of Greater Philadelphia recently awarded a $25,000 grant to establish the local YCP chapter, which will be headed up by president Kasey Brown, with Father Christopher Redcay, pastor of St. Patrick Parish in Malvern, as chaplain.

In his homily at the Aug. 27 liturgy, Archbishop Pérez said he had been impressed by the “vibrant, faith-filled young adults” of YCP’s Cleveland chapter during his tenure as bishop of that diocese. Upon his installation as Philadelphia’s archbishop, he asked Baugh, now the organization’s executive director, to bring YCP to the five-county archdiocesan area, which includes 13 Fortune 500 companies.

Above all, said the archbishop, YCP by design fosters what Pope Francis calls a “culture of encounter.”

“Ultimately, we are all here for one simple reason,” said Archbishop Pérez. “We had an encounter with Jesus Christ.”

That experience must be “renewed over and over again,” he said, encouraging those present to “give as a gift what you have received.”

The archbishop challenged his listeners to “penetrate the world from which you come” and to “begin to invite others to encounter Christ” as part of the “missionary, evangelizing spirit the church calls all of us to have.”

“Our generation has so much to offer,” said Baugh in her remarks at the reception. “Saints who are the most pivotal in renewing the church during challenging times were often in their 20s and 30s.”

YCP also provides “an opportunity for all the generations to get involved,” Baugh added. “We believe that young people will be the most successful if they have support not from their peers but from those who have gone before them. So we integrate the generations in a really beautiful way in our ministry by inviting experienced Catholics to share their wisdom with us as speakers and mentors.”

That support is essential as young professionals draw on their Catholic faith to navigate an increasingly complex and challenging business world, said brothers Matthew and Mike Klucsik.

“My faith is something that I can lean on when I’m having difficulty,” said Matthew Klucsik, who works for an international logistics firm. “It’s also something that reinforces the work ethic I already have that goes along with being Catholic.”

Mike Klucsik said he finds reassurance in being part of the Catholic Church amid his responsibilities at an architectural firm.

“Your demographic is actually a passion of mine,” he said. “Know that I’ll walk with you and accompany you … but also know that I expect great things of you, because you have a lot to give.”

NEXT: Ministry to youth is a call to the whole church, leader says