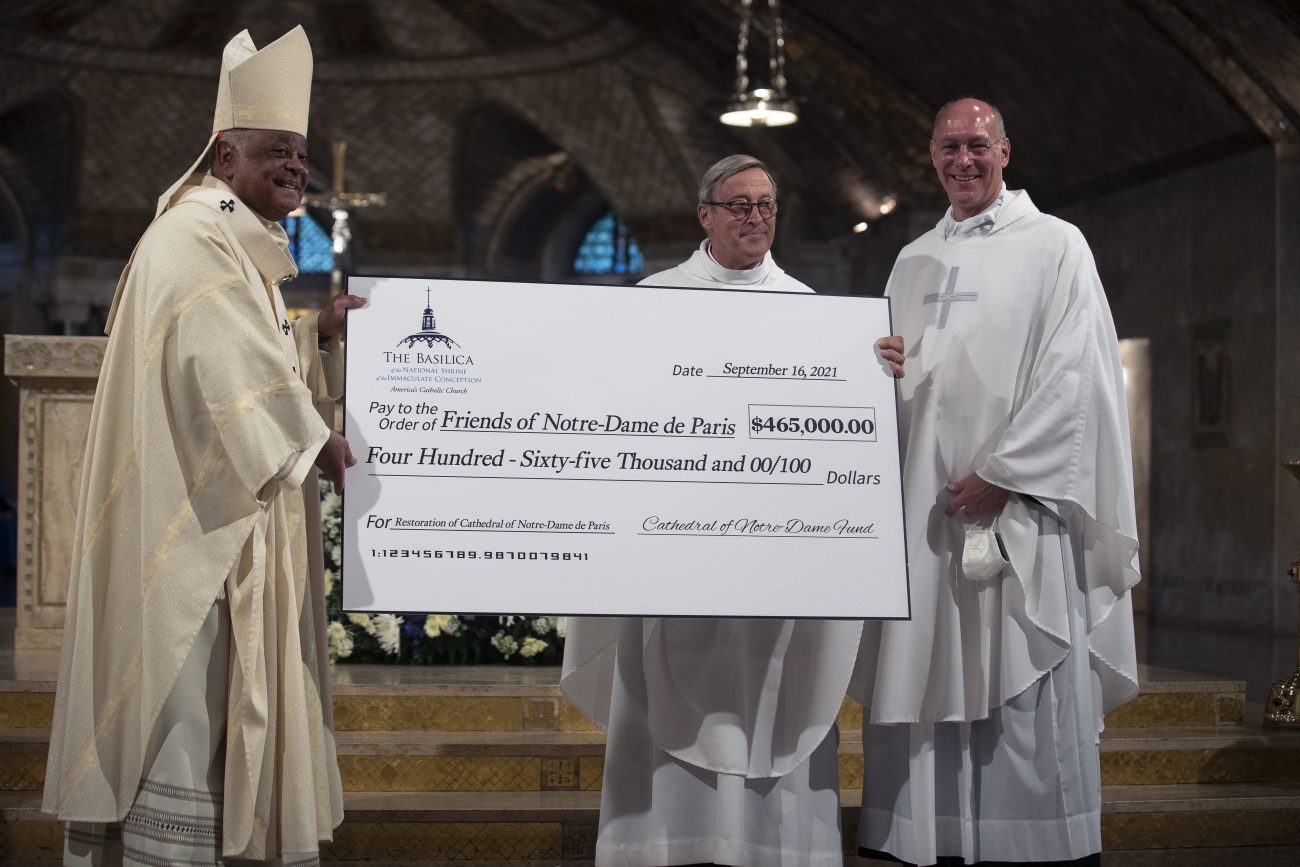 Msgr. Patrick Chauvet, center, rector of the Notre Dame Cathedral in Paris, receives a check from Msgr. Walter Rossi, rector of the Basilica of the National Shrine of the Immaculate Conception in Washington, and Washington Cardinal Wilton D. Gregory after a special Mass in in the basilica's Crypt Church in Washington Sept. 16, 2021. The funds are for restoration efforts of the historic cathedral in France. (CNS photo/Tyler Orsburn)

WASHINGTON (CNS) — The Basilica of the National Shrine of the Immaculate Conception in Washington has collected and donated nearly half a million dollars to assist the restoration and rebuilding efforts of the Notre Dame Cathedral in Paris, which was extensively damaged in a fire two years ago.

The donation was made Sept. 16 during a Mass celebrated by Washington Cardinal Wilton D. Gregory in the national shrine’s Crypt Church.

He called the gift to “our sisters and brothers in France” for the cathedral’s repair “an expression of our deep affection and support as they continue the restoration of Notre Dame de Paris.”

“Our local response (to the blaze) in the United States of America was to join millions of people in pledging to help to restore this world treasure,” Cardinal Gregory said.

Cardinal Gregory, who as archbishop of Washington is chairman of the national shrine’s board of trustees, was the principal celebrant of the Mass.

Noting the Notre Dame Cathedral “has welcomed countless millions of people for centuries — some have actually been saints while others were great sinners,” Cardinal Gregory said, “May our gift assist the people of Paris in restoring a place of prayer and beauty for those who visit that world famous shrine in the centuries that will follow.” 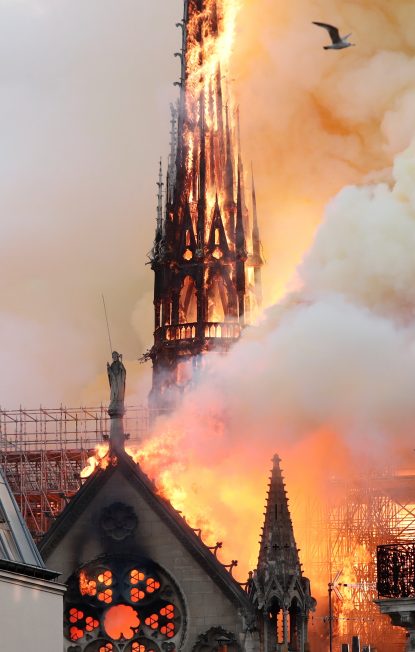 Flames and smoke billow from the Notre Dame Cathedral after a fire broke out in Paris April 15, 2019. Officials said the cause was not clear, but that the fire could be linked to renovation work. (CNS photo/Benoit Tessier, Reuters)

The Mass was televised on EWTN, Catholic TV and Salt+Light TV, and livestreamed over various internet platforms.

Among those who were in attendance were Phillip Etienne, France’s ambassador to the United States; Michael Picaud, president of the Friends of Notre Dame de Paris, the organization raising funds for the cathedral’s restoration; and parishioners from St. Louis of France Parish, the French-speaking parish in the Archdiocese of Washington.

During the Mass, prayers were offered for the benefactors and donors to the cathedral restoration effort. At the end of the Mass, Msgr. Rossi and Cardinal Gregory presented a $465,000 check to Msgr. Chauvet. The money, Msgr. Rossi said, was raised “thanks to the great generosity of people throughout the United States and beyond.”

“On Monday of Holy Week 2019, fire ravaged Notre Dame and caused significant damage to this venerable cathedral,” Msgr. Rossi explained prior to presenting the check. “That very day the national shrine began a campaign to help restore the cathedral, which was then supported by United States Conference of Catholic Bishops and dioceses throughout the United States.”

The shrine’s fundraising effort to restore Notre Dame began when more than 2,000 people attended an organ concert it hosted less than two weeks after the fire. The concert was performed by Johann Vexo, a Notre Dame organist who was playing at the cathedral at the time the fire broke out there.

The national shrine also created a special online collection to raise funds in support of the restoration effort.

Msgr. Chauvet, speaking in French, said he was “particularly touched” by the donation that “will be of great help to Notre Dame.”

Noting the difficulties in traveling during this time of COVID-19, he said that “nothing will separate us from our American friends because love is stronger than the pandemic.”

“I would like to thank all of the faithful here because we see the generosity of the American people,” Msgr. Chauvet said speaking through an interpreter. “After this fire, Notre Dame is no longer Notre Dame de Paris, but Notre Dame of the World.”

More than 400 firefighters spent more than 15 hours to extinguish the April 15, 2019, blaze, which destroyed the 850-year-old cathedral’s main roof, steeple, statues of saints, choir loft and nave. There also was extensive smoke and water damage to the cathedral’s many priceless works of art.

Firefighters were able to save the cathedral’s famous 13th-century stained-glass rose windows; relics believed to be Jesus’ crown of thorns, one of the nails used to crucify him and a piece of wood from his cross; other important artworks and treasures; and the cathedral’s great organ. That organ, the largest in France, has 8,000 pipes and five keyboards. It was built in the 15th century and restored in the 18th century.

A five-month investigation into the cause of the blaze was inconclusive. Investigators have theorized the fire was started either by a workman’s cigarette or an electrical short circuit.

It has been estimated that it will take more than a decade and cost more than $1 billion to completely restore the historic cathedral.

“When the iconic Notre Dame sanctuary suffered serious fire damage in 2019, the hearts of people throughout the world were shaken,” Cardinal Gregory said. “People throughout the world all wanted to make sure that this house of welcome and prayer would be available for generations to come so that they could find and embrace the Christ in that place of hospitality and welcome.”

He added that the shrine’s donation to the Notre Dame Cathedral will ensure that future generations will be able to continue to “come to that blessed place seeking and welcoming none other than Jesus himself in a shrine that existed under the privileged title of his own Blessed Mother.”

NEXT: Movement aims to build tradition of walking pilgrimages in U.S.