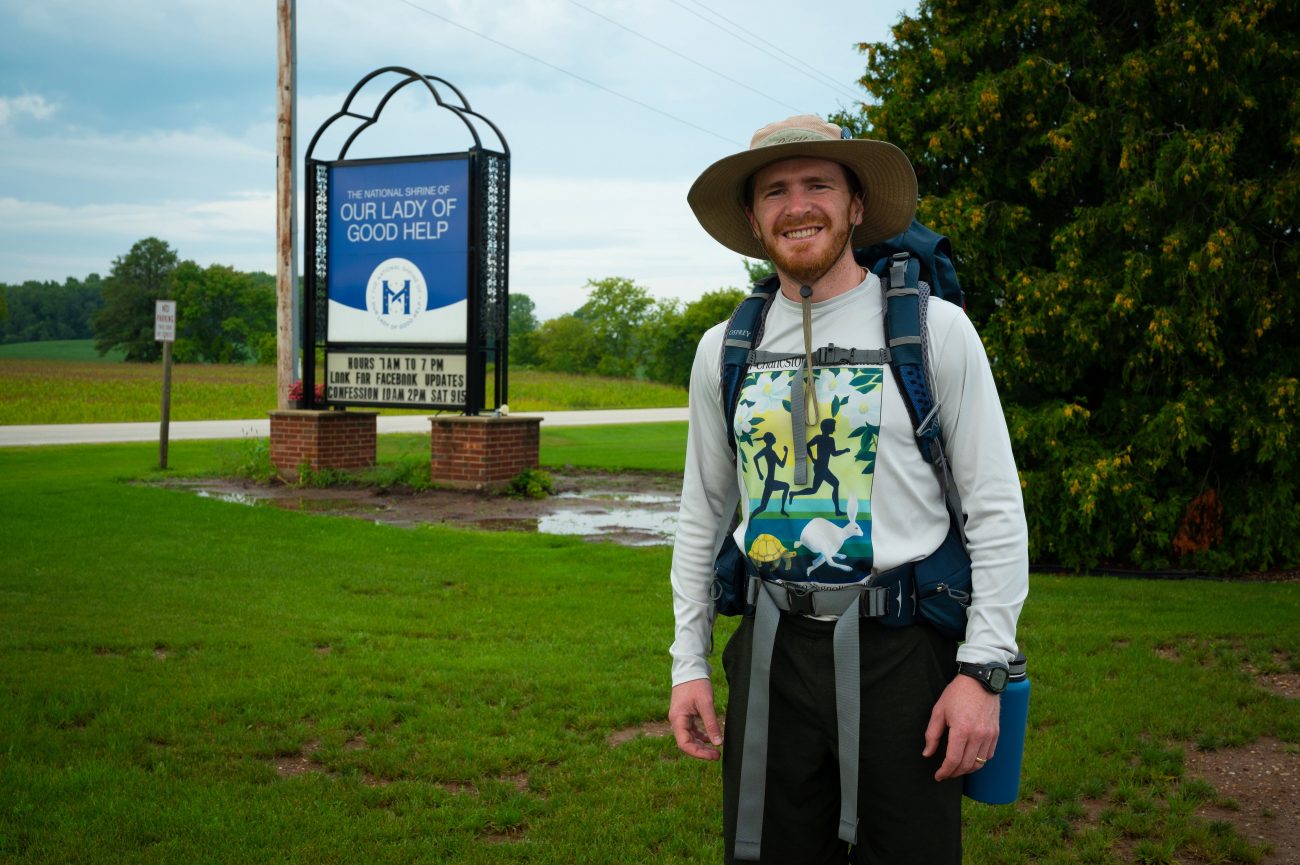 Will Peterson, founder of Modern Catholic Pilgrim, prepares to begin a 130-mile walking pilgrimage from the National Shrine of Our Lady of Good Help in Champion, Wis., to the Basilica of the National Shrine of Mary Help of Christians in Hubertus, Wis., Aug. 28, 2021. Modern Catholic Pilgrim will add the trek, known as "The Wisconsin Way," to its list of walking pilgrimages. (CNS photo/Sam Lucero, The Compass)

ALLOUEZ, Wis. (CNS) — Walking pilgrimages to religious sites have been a popular way of expressing and building one’s faith and connection to God for centuries.

A new opportunity to experience this physical act of faith will soon be available, courtesy of the Modern Catholic Pilgrim based in San Diego.

The Wisconsin Way walking pilgrimage is a journey first promoted by Father Andrew Kurz, administrator of St. Paul Parish in Plainfield. Father Kurz created his own walking pilgrimage from Champion to Hubertus, also known as Holy Hill, in 2013.

He told The Compass, Green Bay’s diocesan newspaper, that it was his hope to ignite a walking pilgrimage movement in this country.

Peterson, whose Modern Catholic Pilgrim project leads walking pilgrimages in Kentucky and California, plans to add The Wisconsin Way to its offerings. He decided to scout the route before promoting the pilgrimage.

“My plan for this first pilgrimage is to get a sense of the route and to connect with our initial hospitality network members along the way, staying with hosts from All Saints (Parish) in Denmark and with the monks at (Holy Resurrection Monastery in) St. Nazianz before passing into the Archdiocese of Milwaukee,” Peterson told The Compass in an email.

“We at Modern Catholic Pilgrim plan to lead an annual spring and an annual fall pilgrimage for young adults along The Wisconsin Way beginning in 2022,” he added.

Peterson said he learned about the walking pilgrimage after reading about it in America magazine. Jesuit Father Vincent Strand wrote a first-person column in February 2020 about his pilgrimage from Champion to Hubertus.

“Father Strand is currently studying for a doctorate in theology at Notre Dame in South Bend, Indiana,” said Peterson. “Fortunately, my now-wife (Katie) was working at the University of Notre Dame last year, so he and I could share some walks around campus, and he could describe what to expect along the route. He also connected me with Father Kurz, who has done so much to promote The Wisconsin Way.”

Peterson, 29, said he became interested in walking pilgrimages while he was a student at the University of Notre Dame.

“I was fortunate … to make an Easter Triduum pilgrimage throughout Rome for Pope Francis’ first Easter” in 2013, he said. “I had never felt so connected to the Trinity as I did that Easter Sunday at the end of the pilgrimage, as we stood outside St. Peter’s Basilica for the Mass. I came back knowing that pilgrimage would remain a necessary part of my prayer life.”

His first multiday walking pilgrimage took place in 2017. He and David Cable, co-founder of Modern Catholic Pilgrim, walked four days and 75 miles to the Abbey of Gethsemani, a Trappist monastery in Kentucky where Father Thomas Merton lived.

“We stayed with two host families along the way and in an interfaith homeless shelter before arriving at the abbey to spend two days in prayer with the monks,” he said. “The beauty of that experience led us to realize we needed to help other young adult Catholics make similar journeys.”

Peterson said Modern Catholic Pilgrim, a 501 (c)(3) nonprofit organization, “aims to deepen faith and build community across the United States through walked pilgrimages in the Catholic tradition.” The multiday pilgrimages are open to young adults, ages 18-30.

“We aim to attract young adults who desire to challenge everyday life by stepping away from it to spend time in an active, prayerful presence,” he said. “Those could be young adults who are already totally on fire for their faith, but they could also be ones who might be a little lukewarm and questioning. Pilgrimage is accessible to all, no matter where they find themselves on the faith journey.”

The goal of each walking pilgrimage, he said, is that “each pilgrim returns to everyday life having taken at least one step deeper into his or her faith life.”

Peterson credited Father Kurz for connecting him with the monks at Holy Resurrection Monastery in St. Nazianz, Wisconsin.

“Introducing young adult Catholics to the universality of our church through time spent with Eastern-rite Catholic monks is one of the highlights of this pilgrimage,” he added. “The monks’ commitment to hospitality and prayer will inspire young adults to form their own lives around such crucial Christian pillars.”

NEXT: Court to hear case on religious schools barred from Maine choice program