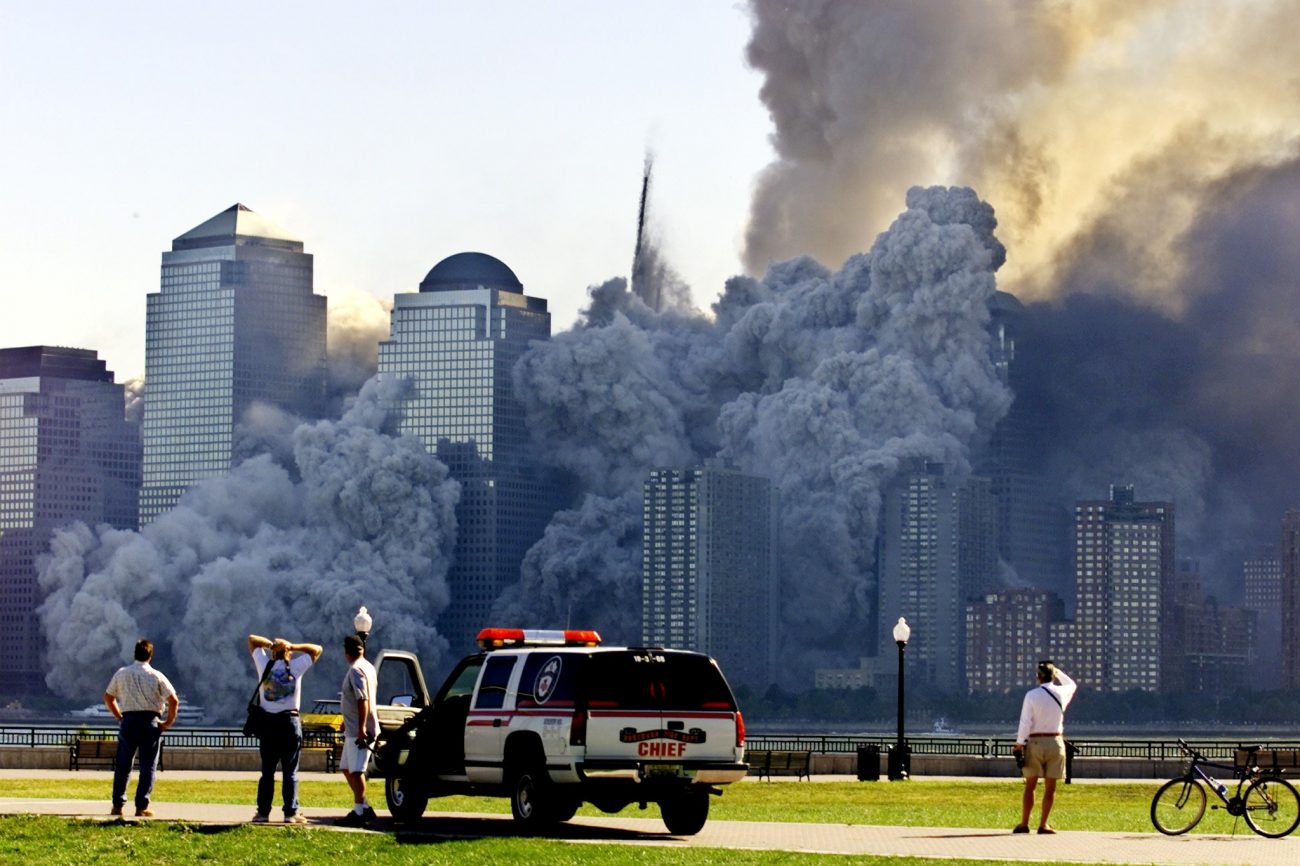 The remaining tower of New York City's World Trade Center, Tower 2, dissolves in a cloud of dust and debris about a half hour after the first twin tower collapsed Sept. 11, 2001. Nearly 3,000 people died in the collapse of the towers, at the Pentagon and in rural Pennsylvania when terrorists attacked the United States using commercial airplanes. Osama bin Laden and his organization, al-Qaida, were held responsible for the attacks, which prompted the U.S.-led war in Afghanistan. (CNS photo/Ray Stubblebine, Reuters)

WASHINGTON (CNS) — The president of the U.S. Conference of Catholic Bishops recalled the heroic deeds of first responders and security forces during the Sept. 11 attacks around the country on the eve of the 20th anniversary of the day’s harrowing events.

Archbishop José H. Gomez of Los Angeles also remembered those who lost family members and friends at the World Trade Center, the Pentagon and in rural Pennsylvania and said those who died are memorialized in prayer on this anniversary.

“We pray for the innocent lives that were lost, and we pray for those who grieve, and for the many who still bear the wounds from these attacks, physical, emotional and spiritual,” Archbishop Gomez said in a statement released by the USCCB Sept. 10.

The first responders that day “gave their lives in the service of their neighbors,” he said.

“This violence, borne of worst evil in the human heart, also brought out the best in our humanity. We think today of the courage and generosity of countless ordinary people and the spirit of unity and authentic patriotism we saw in the days after these attacks,” the statement said.

“We honor the dead by the way we live. And today we pray for a new spirit of national pride and unity. May God inspire in all of us to seek fellowship, reconciliation and common purpose.”

The archbishop also asked God “to bring comfort to those who mourn and peace to every heart that is consumed by hatred, and may he bring peace to our troubled world.”

Baltimore Archbishop William E. Lori, who also issued a statement about the 20th anniversary of the Sept. 11 attacks, said: “We were changed by what happened that day. Those terrible events would rend our hearts and minds, forever changing our understanding of what it is to be safe and free.”

“We remember those who lost their lives. We pray for the eternal repose of their souls,” the archbishop said. “We also recall the ongoing toll the attacks took on so many lives and the immeasurable suffering borne by family members and friends to this day.”

He also urged people to recall “how the worst of tragedies brought out the best of us: the courageous and selfless service of first responders and emergency workers who heroically risked their lives to save others, and the ways both great and small that we banded together as a nation to care for and support one another.”

Archbishop Lori said the 9/11 anniversary should remind people of the gift of unity and also said it “should not take a tragedy such as these terrorist attacks to bring us together.”

Amid the current divisions in the nation and world, he said that maybe “remembering 9/11 will prompt us, through God’s grace, to a renewed commitment to building up the unity of the human family.”

He also recalled the words St. John Paul II shared just after the attacks, saying they “still move us today.”

“Even if the forces of darkness appear to prevail,” the pope said at the time, “those who believe in God know that evil and death do not have the final say. Christian hope is based on this truth; at this time our prayerful trust draws strength from it.”