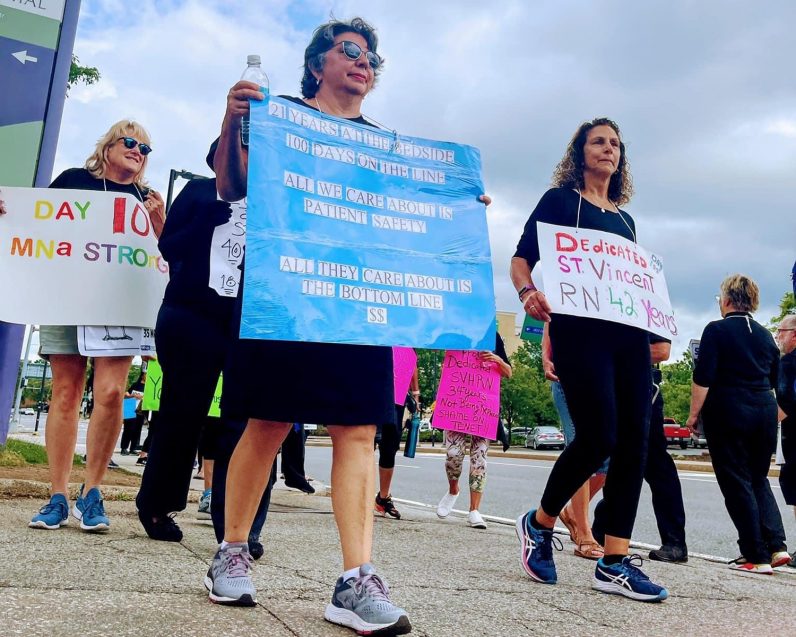 WASHINGTON (CNS ) — The Catholic Labor Network’s annual “Gaudium et Spes” report, issued each year in time for Labor Day, painstakingly notes each unionized Catholic workplace by state and diocese, along with what unions represent workers there.

But a troubling trend not included in the report is the practice of for-profit corporations buying Catholic hospitals, according to Clayton Sinyai, executive director of the Catholic Labor Network.

“Catholic hospitals were set up to perform corporal works of mercy, not to make a profit,” Sinyai said in a Sept. 8 phone interview with Catholic News Service. “This puts them in a situation that when a for-profit institution purchases one, it serves the purpose of trying to serve two masters.”

The Catholic Labor Network has not tracked the ownership changes numerically, “but we’ve seen more of these for-profit institutions operating Catholic hospitals and operating them designed to make a profit,” Sinyai said.

One consequence of this trend, he added, is the ongoing strike at St. Vincent Hospital in Worcester, Massachusetts. Now a half-year old, the strike is the longest nurses’ strike in the state’s history, as well as the longest such strike in the United States in at least 15 years, according to the Massachusetts Nurses Association, which represents the striking workers.

St. Vincent Hospital is now owned by Dallas-based Tenet Healthcare, but still qualifies as a Catholic hospital. “They are supposed to agree when they take over to continue to honor the ERDs” — an acronym for ethical and religious directives — “which is really what makes a hospital a Catholic hospital,” Sinyai said.

Directive 7 “addresses how you treat your workers as a Catholic institution,” he added, “and it is hard for for-profit institutions to be honoring that.”

The directive states: “A Catholic health care institution must treat its employees respectfully and justly. This responsibility includes: equal employment opportunities for anyone qualified for the task, irrespective of a person’s race, sex, age, national origin or disability; a workplace that promotes employee participation; a work environment that ensures employee safety and well-being; just compensation and benefits; and recognition of the rights of employees to organize and bargain collectively without prejudice to the common good.” 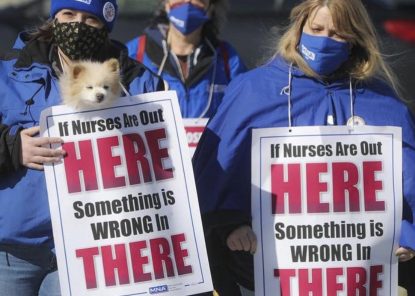 What is going on there now, Sinyai said, “does not serve the common good.”

Contract talks have dragged throughout the strike, which Sinyai said was driven largely by staffing issues. The St. Vincent Hospital website said it made a “last, best and final offer” to the union in early August. The hospital has also hired 140 permanent replacement nurses since the strike.

MassLive, a website run by Advance Publications, reported Aug. 31 that both sides met Aug. 16 and 19 after a federal mediator called them in to talk in secret. They nearly came to an agreement, settling previous differences on hospital staffing. But back-to-work provisions are stalling a deal. The striking nurses want to return to their previous jobs inside St. Vincent without retaliation or harassment; hospital management won’t commit to getting rid of the replacements it hired.

Another emerging trend, according to Sinyai, is organizing activity by adjunct faculty at Catholic colleges and universities.

However, “some Catholic colleges and universities have chosen to use their religious identity as a shield to protect them from honoring the rights of workers,” he added.

“They realize that they can make a case that, as religious institutions, they are not covered by the National Labor Relations Act. It seems they would recognize they are still covered by Catholic social teaching, which recognizes the rights of workers, including those at Catholic institutions.”

“This exemption does not mean that teachers lack the right to form unions and bargain collectively, just that the National Labor Relations Board will not protect them from those that might violate their rights,” the “Gaudium et Spes” report said.

Sinyai noted that 2021 marks the 35th anniversary of the U.S. bishops’ pastoral letter “Economic Justice for All,” which said: “All the moral principles that govern the just operation of any economic endeavor apply to the church and its agencies and institutions; indeed the church should be exemplary.”

NEXT: First responders, those who died on 9/11 remembered by lead U.S. bishop