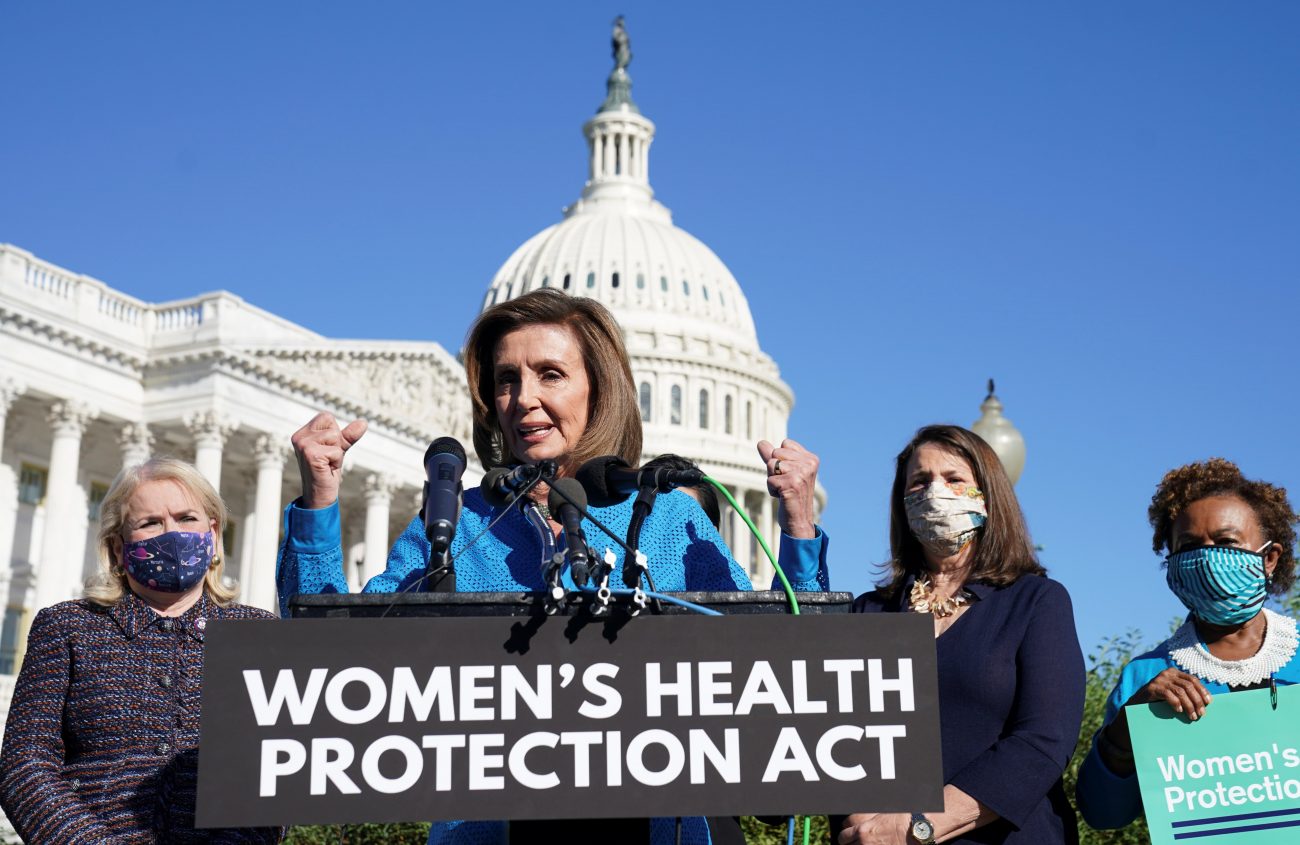 House Speaker Nancy Pelosi, D-Calif., speaks during a news conference on Capitol Hill in Washington Sept. 24, 2021, about the Women's Health Protection Act, which establishes a legal right to abortion in all 50 states under federal law. San Francisco Archbishop Salvatore Cordileone publicly announced May 20 that he has advised Pelosi she is not to present herself for holy Communion "unless and until" she publicly repudiates her stance on abortion and receives absolution. (CNS photo/Kevin Lamarque, Reuters)

WASHINGTON (CNS) — In a 218-211 vote Sept. 24, the U.S. House passed what opponents consider one of the most extreme abortion bills ever seen in the nation — the Women’s Health Protection Act.

“This bill is far outside the American mainstream and goes far beyond Roe v. Wade,” Rep. Chris Smith, R-N.J., co-chairman of the Congressional Pro-Life Caucus, said in remarks ahead of the vote. “This bill constitutes an existential threat to unborn children and to the value of life itself.”

H.R. 3755 codifies the U.S. Supreme Court’s 1973 Roe v. Wade decision legalizing abortion nationwide. The measure establishes the legal right to abortion on demand at any stage of pregnancy in all 50 states under federal law.

“For the first time ever by congressional statute, H.R. 3755 would legally enable the death of unborn baby girls and boys by dismemberment, decapitation, forced expulsion from the womb, deadly poisons or other methods at any time until birth,” he said,

“A significant majority of Americans are deeply concerned about protecting the lives of unborn children,” the Catholic congressman said.

He pointed to a 2021 Marist Poll that found 65% of Americans want Roe v. Wade “reinterpreted to either send the issue to the states or stop legalized abortion.”

The bill nullifies: requirements to provide women seeking abortion with specific information on their unborn child and on alternatives to abortion; laws requiring a waiting period before a woman receives and abortion; laws allowing medical professionals to opt out of providing abortions; and laws stating that only licensed physicians can perform abortions.

“This deceptively named bill is the most extreme pro-abortion bill our nation has ever seen,” Archbishop Joseph F. Naumann of Kansas City, Kansas, chairman of the U.S. bishops’ pro-life committee, said Sept. 24. “H.R. 3755 is not about the health of women, but only about eliminating any and all protections for unborn children — including baby girls.”

If it became law, “it would lead to the deliberate destruction of millions of unborn lives, leaving countless women with physical, emotional and spiritual scars,” he said in a statement.

“This bill assumes that abortion can be the only, or best, solution to a crisis pregnancy” and “is built on a false and despairing narrative that utterly fails women,” he continued. “In treating abortion as the moral equivalent to the removal of an appendix, this proposal is radically out of step with the American public.”

“As a nation built on the recognition that every human being is endowed by its Creator with the unalienable rights to life, liberty and the pursuit of happiness, this bill is a complete injustice,” Archbishop Naumann said.

“Congress should embrace public policy that respects the rights of mothers, their children and the consciences of all Americans,” he added, “not advance a radical ‘abortion on demand until birth’ policy that is completely out of step with our country’s principles.”

The Senate version of the Women’s Health Protection Act, S. 1975, is not expected to pass, but sponsors of the House bill said their vote still sends a message about the outrage they say has been felt by women over the new Texas law banning abortion after six weeks.

The vote also comes ahead of the Dec. 1 oral arguments to be heard by the high court in in an appeal from Mississippi to keep its ban on abortions after 15 weeks of pregnancy.

Supporters of the law are urging the court to reexamine its previous abortion rulings, including Roe.

“In the United States, the tragically pervasive acceptance of abortion has resulted in more than 62 million abortions since Roe v. Wade,” Bishop Michael F. Burbidge of Arlington, Virginia, said in a statement.

“Still, today the U.S. House of Representatives voted to impose abortion on demand nationwide — and thus double down on daily murder of the defenseless — by passing the false and deceptively named ‘Women’s Health Protection Act,'” he said Sept. 24.

“Let us be clear: Abortion harms women and ends the life of a child; it is not health care, and it protects no one,” he said. “Health and protection are about healing, defending and saving lives, not destroying them.”

National pro-life leaders were quick to respond to the House vote, including Jeanne Mancini, president of March for Life, who said that “pro-abortion Democrats have revealed their true vision for abortion policy in America” by pushing legislation she also called “deceptively named.”

All House Democrats but one voted for H.R. 3755; Rep. Henry Cuellar, D-Texas, was the lone Democrat opposed to it. No House Republicans voted for the measure.

If President Joe Biden, House Speaker Nancy Pelosi, D-Calif., “and their allies get their way, the United States will soon be indistinguishable from North Korea and China on the human rights issue of abortion,” Mancini said.

Biden and Pelosi are both Catholics who support legal abortion and have vowed to see Roe codified in federal law.

Regarding the bill’s provision invalidating all state laws, National Right to Life’s president Carol Tobias noted that “the 10th Amendment, which gives each state the right to set its own policy, is in the U.S. Constitution. Abortion is not.”

“Only abortionists and abortion providers like Planned Parenthood benefit from this legislation,” she said in a statement. “Tragically, the losers in this debate are the mothers and their unborn babies.”

Marjorie Dannenfelser, president of the Susan B. Anthony List, in a conference call with reporters ahead of the vote called the House action a “completely extreme approach at the moment the country is moving in the opposite direction.”

Father Frank Pavone, national director of Priests for Life, also decried the House vote, adding: ““We are grateful that the U.S. Senate will be a firewall against this radical bill, and grateful for the role of the filibuster in saving America from such dangerous legislation.”

In a tweet Sept. 25, Bishop Donald J. Hying of Madison, Wis., said: “With the full support of our Catholic president, our Catholic speaker of the house, and scores of Catholic representatives, the most radical pro-abortion bill was passed by the House of Representatives, claiming that any restrictions on abortion are misogyny.”

In Virginia, Richmond Bishop Barry C. Knestout called on U.S. senators “to direct our government’s resources toward policies that support both mothers and their children. Reverse the extremely dangerous and deadly course you are charting. Do not allow this legislation to pass in your chamber!”

He asked Virginia Catholics to contact their senators to vote no on their version of “the most radical abortion bill of all time.”

“Together, all of us, including our elected officials, must reject abortion and welcome, protect and defend life every day through the decisions we make and the lives we live,” Bishop Knestout said.

The “misnamed” measure “shows to what radical extremes the supposedly ‘pro-choice’ advocates in our country will go to protect what they hold most sacred: the right to kill innocent human beings in the womb,” Archbishop Salvatore J. Cordileone said in a Sept. 21 statement.

Denver Archbishop Samuel J. Aquila also weighed in with a statement a day later, echoing the San Francisco prelate in urging the bill be defeated.

“Today, the abortion industry and its supporters are pushing one of the most extreme national abortion bills this country has ever seen, and doing it under the lie that abortion is a form of health care that must be protected and promoted,” he said.

Early Sept. 24, Archbishop Cordileone tweeted: “Morning Prayer: On this day when our U.S. Congress votes on whether to strip all the unborn of all protections in all fifty states, May the Martyrs of Chalcedon, who refused even a pinch of incense to the Pagan God of War, Pray for us.”

PREVIOUS: Synodal process looks to hear from voices on the margins of the church