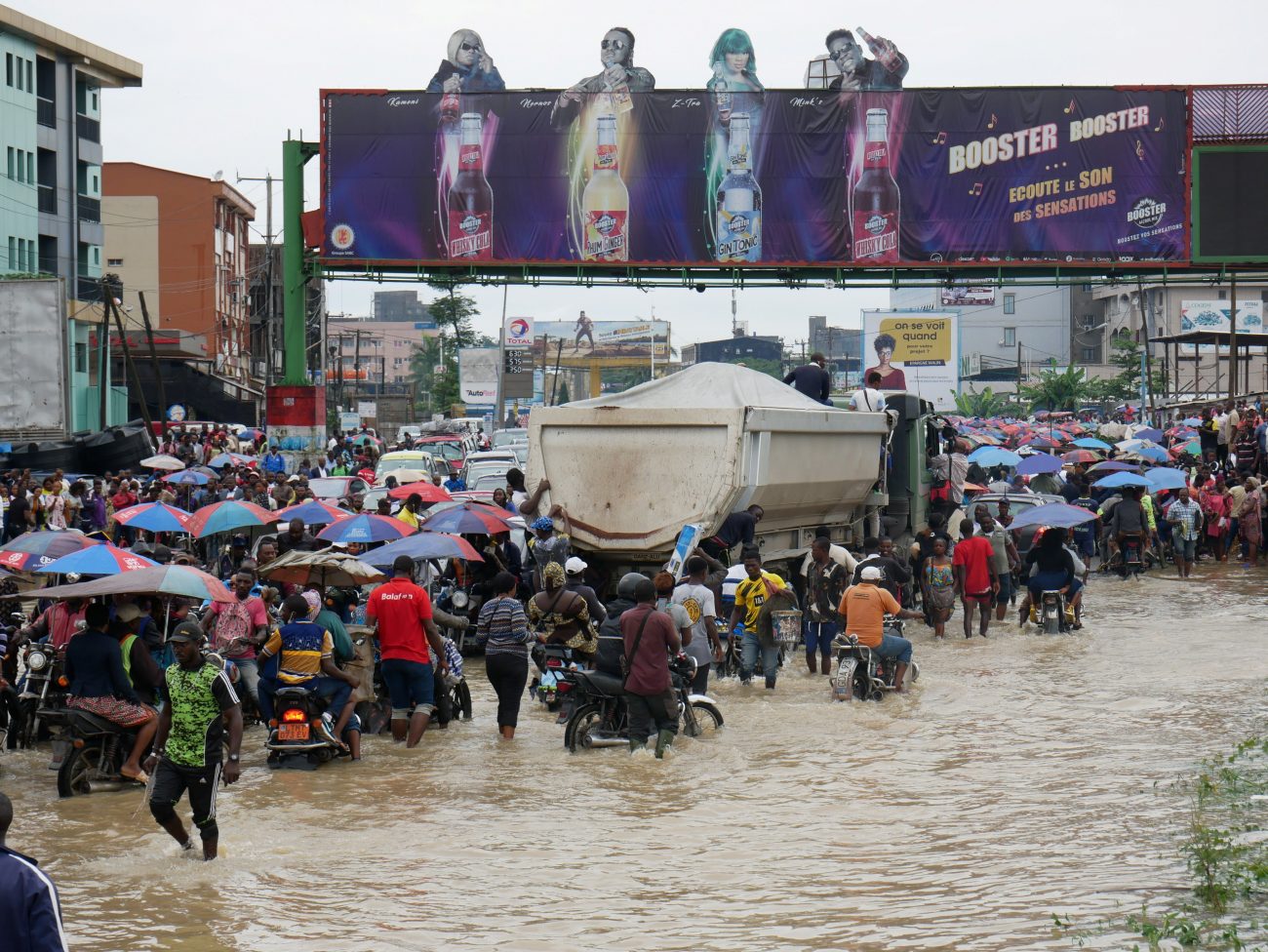 People make their way through a flooded street after the heavy rains in Douala, Cameroon, Aug. 12, 2021. As they mark the Season of Creation, Catholics in Africa celebrate the Congo Basin as the second lung of the earth and call for its protection to fight climate change. (CNS photo/Joel Kouam, Reuters)

NAIROBI, Kenya (CNS) — As they marked the Season of Creation, Catholics in Africa celebrated the Congo Basin as the second “lung” of the earth and called for its protection to fight climate change.

The celebrations in an online conference focused on the work of the Ecclesial Network for the Congo River Basin (REBAC), a Catholic network that includes Cameroon, Congo, Republic of Congo, Equatorial Guinea, Gabon and Central African Republic.

“The Congo Basin — a major geographic region rich biodiversity — is very important not only for Africa but the entire world,” Prince Papa, coordinator of the Laudato Si’ Movement in Africa, told Catholic News Service. “We must ensure that it is protected because many creatures and creation are depended on it.”

Speakers during the online conference reiterated the support for Indigenous people as custodians of biodiversity, highlighted the twin crises of the loss of biodiversity and climate change and their interconnectedness, and spoke against the rapid deforestation in the Congo Basin forest.

They also called for an end to oil exploration and the protection of Virunga National Park in Congo.

Henri Muhiya Musabate, executive secretary of Congo’s Episcopal Commission on Natural Resources, told the virtual conference most national budgets in Congo Basin countries are funded through mining, oil and forestry, but such activities were harming the countries and the people.

“Extractive incomes are not profitable to populations and to the development of countries,” said Musabate. 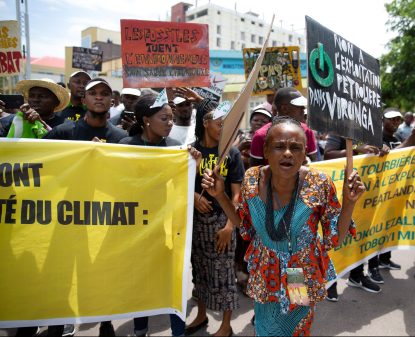 A woman leads environmental activists as they participate in a climate protest in the streets of Kinshasa, Congo, Nov. 29, 2019. As they mark the Season of Creation, Catholics in Africa celebrate the Congo Basin as the second lung of the earth and call for its protection to fight climate change. (CNS photo/Hereward Holland, Reuters)

Most of the countries, according to the official, were in poverty and experienced armed conflicts, with militants sustaining the fights to access the natural resources. He also highlighted the illicit sale of arms, weak governance and forced migration, among other challenges.

The effects of climate change are visible in the Congo Basin, said Musabate, as he highlighted increased floods, droughts, disruption of seasons and rising temperatures.

He said people must learn how to convince countries in the Congo Basin to stop exploiting hydrocarbons to fund their budgets and how to fight hunger by reducing cultivatable areas held by families living in the forests.

Rita Mabyalhat, head of transparency programs for the Justice and Peace Commission of the Archdiocese of Pointe-Noire, Republic of Congo, said several measures have been put in place by governments and international organizations to protect the basin’s wetlands from degradation, drainage and drying up due to human activities and mining.

These include a cross-border agreement between the Republic of Congo and Congo on the importance of good land use and planning infrastructures, and initiatives to speeding up conservation measures, restoration and sustainable management of wetlands among others.

But she warned, “Even if the Congolese authorities reaffirm their concern to preserve the places, the growing economic needs of the two Congos and the lack of alternatives for the people of the Congo Basin raise fears of an uncertain future for the wetlands.”

The Season of Creation is an annual ecumenical event during which Christians join to pray and act together for the earth. The theme of this year’s event is “A Home for All? Renewing the Oikos of God.” Oikos is a Greek word that roughly translates to home or family.

The virtual conference is taking place ahead of the U.N. Convention on Biological Diversity — scheduled virtually Oct. 11-15 and in person next spring in Kunming, China — and the 26th U.N. Climate Change Conference (COP26) Oct. 31-Nov. 12 in Glasgow, Scotland.

In the meeting in China, world leaders will review the progress on the convention. In Glasgow, countries will announce their plans to meet the goals of the Paris climate agreement. The 2015 accord addresses climate change and its negative impacts.

Catholics in Africa are urging world leaders to tackle the climate change emergency and the biodiversity crisis together. They also want action to limit global warming to 1.5 degrees Celsius and a promise that there will be no more biodiversity loss.

“It is our responsibility as Catholics to lift up the voices of the most vulnerable and advocate on their behalf. We must act now,” said a petition released by Laudato Si’ Movement.

NEXT: German cardinal contributed to ‘crisis of trust’ on abuse, will take leave