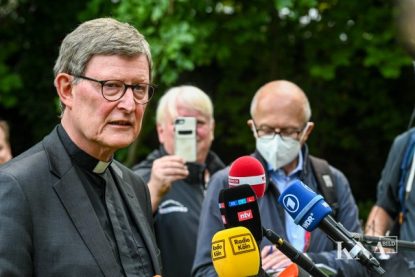 VATICAN CITY (CNS) — Cardinal Rainer Maria Woelki of Cologne will take a “spiritual sabbatical” after a Vatican investigation found he did nothing illegal in his handling of clerical sex abuse allegations, but he did contribute to a “crisis of trust” in his archdiocese.

The German bishops’ conference announced Sept. 24 that Pope Francis had “a long conversation” with Cardinal Woelki earlier in September and agreed with the cardinal’s request to take a break from mid-October until March 1 because it was “obvious that the cardinal and the archdiocese need a time of pause, renewal and reconciliation.”

Cologne Auxiliary Bishop Rolf Steinhäuser will serve as apostolic administrator of the archdiocese and will lead “a spiritual process of reconciliation and renewal,” the statement said.

In May, Pope Francis ordered an apostolic visitation of the Cologne Archdiocese “to obtain a comprehensive picture of the complex pastoral situation” there and to investigate how accusations of clerical sexual abuse were handled by the cardinal and by Auxiliary Bishops Dominik Schwaderlapp and Ansgar Puff, both of whom had offered to resign.

After an onsite investigation and review by offices of the Roman Curia, Pope Francis “has decided not to accept their resignation from office. In the case of both bishops, there are isolated deficiencies in the handling of procedures,” but “not an intention to cover up abuse or ignore those affected,” the German bishops’ statement said.

Bishop Puff will resume his regular ministry immediately, the statement said, while Bishop Schwaderlapp “has asked to be allowed to work for one year as a chaplain in the Archdiocese of Mombasa, Kenya, before returning to his ministry as auxiliary bishop in the Archdiocese of Cologne. The Holy Father has granted this request.”

As for the 65-year-old Cardinal Woelki, the statement said, “there has been no indication that he acted unlawfully in dealing with cases of sexual abuse.”

Allegations that the cardinal wanted to cover up cases or the extent of the problem “are refuted by the facts that have since been published and the documents reviewed by the Holy See. The archbishop’s determination to come to terms with the crimes of abuse in the church, to reach out to those affected and to promote prevention is evident not least in his implementation of the recommendations of the second study, which he has already begun.”

An uproar followed the cardinal’s decision not to publish an initial report from a Munich law firm about how accusations were dealt with. Instead, the cardinal commissioned a new report from a Cologne criminal lawyer and released it in March. The report cleared Cardinal Woelki of wrongdoing.

Cardinal Woelki has “made major mistakes in his approach to the issue of coming to terms with abuse overall, especially at the level of communication,” the statement said. “This has contributed significantly to the crisis of trust in the archdiocese, which has disturbed many of the faithful” and prompted the cardinal to request the pope allow him a sabbatical.

Speaking to reporters in Cologne Sept. 24, the cardinal asked people to acknowledge how the pope and the Vatican investigation found he had handled allegations “seriously and thoroughly and had not covered up anything.”

Bishop Georg Bätzing of Limburg, president of German bishops’ conference, offered on Twitter his hope for a “process of reconciliation in the Archdiocese of Cologne” with Cardinal Woelki away, but he said he was unsure if there could be “a fundamentally changed situation in a few months.”

The bishop said many victims of clerical sexual abuse and many Catholics in the archdiocese will be “perplexed and hurt” by the pope’s decision not to remove any of the bishops, so he offered his prayers that Catholics in Cologne would have “much strength, determination and the necessary patience for the path that now begins.”

Thomas Sternberg, president of the Central Committee of German Catholics, said he could not understand the Vatican decision to keep Cardinal Woelki in office.

“The instrument of a period of sabbatical leave is not enough. It is completely unclear what the end of such a sabbatical might be, and it is not suitable for restoring lost trust.”

The sabbatical is not a solution to the crisis of confidence, he added.

“In politics and in democratic structures, a resignation from office may help to take responsibility and initiate change. The Vatican’s decision prevents such a renewal process, which is sorely needed.” What is important now, he said, is that the leadership of the archdiocese make every effort to closely involve the faithful in order to find out “how a constructive church life in the archdiocese becomes possible again.”

Contributing to this story was Anli Serfontein in Berlin.