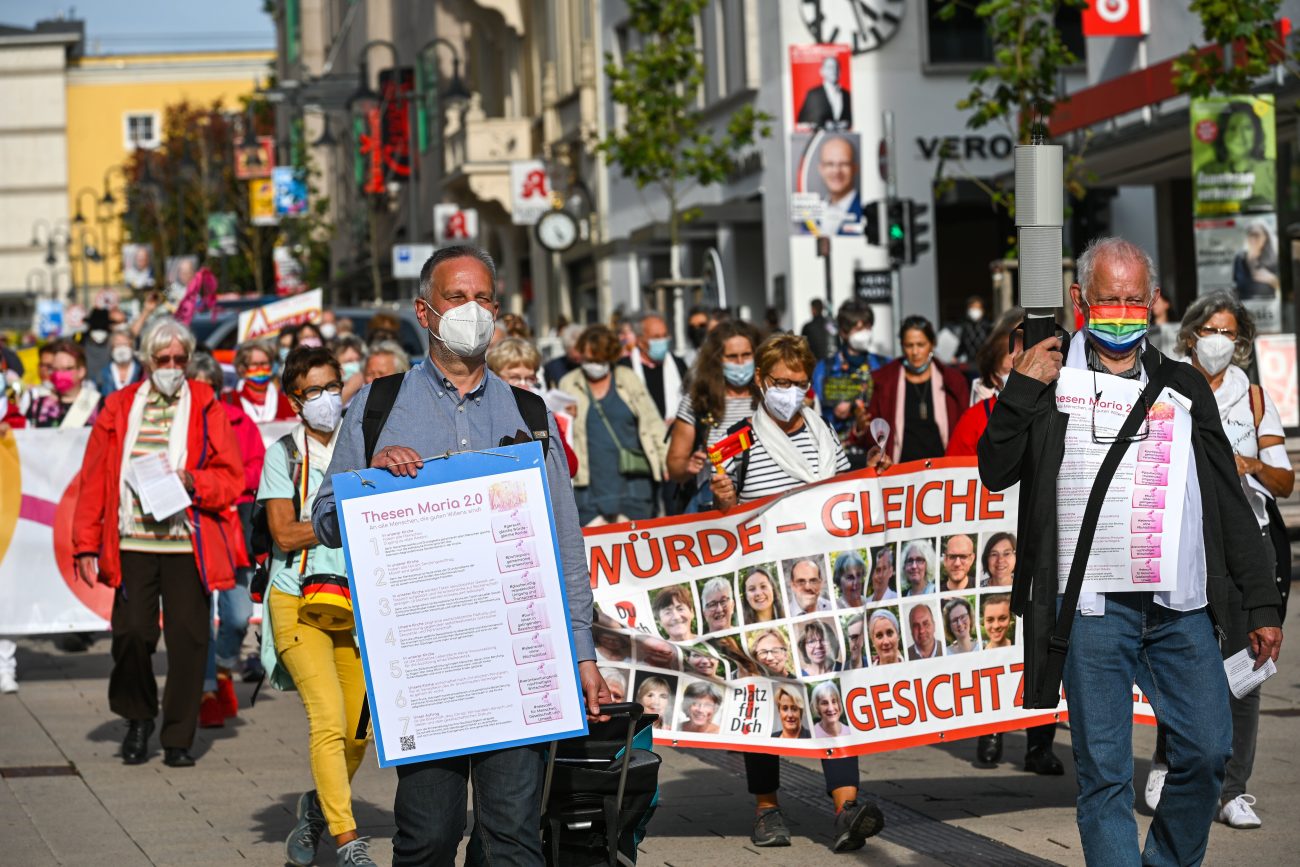 People march with posters and banners during a demonstration at the end of the fall plenary meeting of the German bishops' conference in Fulda Sept. 23, 2021. Protesters demanded equality, justice and credibility in the Catholic Church after they claim bishops have asked them for years to be patient. (CNS photo/Harald Oppitz, KNA)

BERLIN (CNS) — Catholic lay organizations took to the streets of downtown Fulda under the motto “We remain loud” to express their dissatisfaction with the Catholic Church, on the final day of the German bishops’ annual fall plenary assembly.

On Sept. 23, Catholics demonstrated in front of the 18th-century palace where the bishops met and marched to demand equality, justice and credibility in the Catholic Church after they claim bishops have asked them for years to be patient. Throughout the week, Catholic lay organizations set up information stands outside the venue.

“This is demoralizing. The signs of the times and the questions of justice are so urgent that further delay is no longer an option,” said Beatrix Ahr, one of the spokeswomen for Maria 2.0 Kassel, one of the lay Catholic groups that organized the march.

Catholic lay organizations and victim advisory councils have been pressing for changes since the extent of the church sexual abuse first came to light in Germany in 2010.

The German Catholic Church is now under severe pressure to act quickly, but is divided by various internal factions among the 27 bishops, most notably an extremely reform-hesitant faction under Cardinal Rainer Maria Woelki of Cologne, who is waiting for his fate to be decided by Pope Francis. The cardinal has been accused of mishandling cases of abuse in the archdiocese.

In the final news conference Sept. 23, Bishop Georg Bätzing of Limburg, president of bishops’ conference, presented a 17-page report to the press and was at pains to go into great detail about improvements in how the church planned to handle the backlog of sexual abuse cases. Some improvements include increasing the size of the team dealing with the issue and streamlining the process. 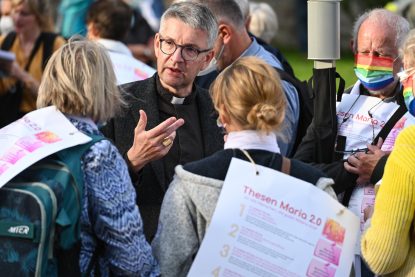 German Bishop Peter Kohlgraf of Mainz talks with women during a demonstration at the end of the fall plenary meeting of the German bishops’ conference in Fulda Sept. 23, 2021. Protesters demanded equality, justice and credibility in the Catholic Church after they claim bishops have asked them for years to be patient. (CNS photo/Harald Oppitz, KNA)

“The issue of sexual abuse is not going away and will also not go away for a long time. I would like to assure you once again that this dark chapter of the church continues to be a high priority on our agenda,” the bishop told journalists in Fulda.

During the meeting, a victims’ advocacy group, the Giordano Bruno Foundation, protested with a huge Carnival-like effigy of a bishop snoozing in a hammock, strung between two large crosses.

They tweeted a picture of them watching the final news conference with the caption: “Those who were victims are deeply disappointed. The DBK (German acronym for the bishops’ conference) has once again failed to seize the opportunity for a liberating stroke and continues to postpone the processing of the abuse scandal.”

Members of the group also tried to speak to the 27 bishops as they entered and left every day. Their actions were highlighted by tweets from the nom-de-plume “Moses,” who uses the Twitter handle @11tesgebotDE, translated as the 11th commandment, meaning “You Should not be Caught.” “Moses” tweeted that only three of the bishops spoke to them. One of them was Bishop Stephan Ackermann of Trier, the bishops’ representative for questions of sexual abuse in the church.

The organizers of Thursday’s demonstration — Maria 2.0 groups, Pax Christi in Fulda, and We Are Church — demanded “tangible concrete change” in the Catholic Church.

“We hold on to our vision of a church, where the liberating message of Jesus is lived, where equality, justice, credibility and love — also in structures — are realized,” the organizers of the demonstration said ahead of the event.

The procession stopped four times in downtown Fulda where, in statements, songs and chants, the four theses first articulated in February were highlighted: equal dignity, equal rights; shared responsibility; respectful interaction; and being able to live in happy relationships.

Maria 2.0 and We Are Church said they expected the German bishops’ conference to question decisions made in the Vatican more thoroughly in future.

There was a lot of criticism all week for Pope Francis’ decision not to accept the resignation request of Hamburg Archbishop Stefan Hesse, who attended the assembly. The archbishop has been accused of 11 breaches of duty in dealing with sexual abuse, in his former post as head of personnel in the Archdiocese of Cologne.

The German Catholic news agency KNA reported that Andrea Keber of the initiative Maria 2.0 said church superiors had gambled away any credibility. She said Pope Francis not accepting Archbishop Hesse’s resignation was “another slap in the face of those affected and shows once again that they are not willing to take real responsibility.”

Not only lay organizations criticized the decision; the Central Committee of German Catholics and the German Catholic Women’s Association expressed their displeasure at the pope’s decision.

KNA reported that Agnes Wuckelt, deputy chairwoman of the German Catholic Women’s Association, called on the bishops to stop putting reforms on the back burner. She said more women, including many older ones, have turned their backs on the church.

PREVIOUS: German cardinal contributed to ‘crisis of trust’ on abuse, will take leave

NEXT: Defend life, promote access to health care for all, pope says